Since I recently moved back to New York state, I looked forward to the NY Drinks NY tasting  for weeks as a way to plunge back in and get reacquainted with New York wine. But then a business lunch ran late and I hoofed it in to Astor Center with barely an hour to spare. Merda! With thirty-five producers, seven wines (roughly) apiece, and 60 or so minutes, I definitely needed an organizing principle.

Tracking down my Hudson Valley neighbors seemed a solid place to start.

Soon, I found all — three of them? Benmarl Winery, Brotherhood Winery, and Whitecliff Vineyard & Winery were the only wineries in the house from the Hudson Valley and Catskills. Still, they made a strong showing. Benmarl’s assistant winemaker, Laura Cypress, who recently moved up from Tennessee but has worked in vineyards all over the world, poured some 2012 Blanc de Blancs from chardonnay grown near Seneca Lake and made in the traditional method. Most of this sparkling is still resting back in Marlboro, but they’d filled a few bottles for the event. Shot through with green apple flavors, it showed a ton of promise — though the Benmarl folks are wise to let it develop for a bit longer. 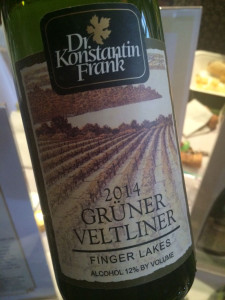 At the nine tables I managed to hit, I tasted at least five solid rieslings, an inky but monolithic Noiret, a muted Gewurztraminer, and a quenching, off-dry rosé whose maker insisted I take a sip before telling me the main variety. “Cayuga,” she confided, as if this it was some kind of dirty word.

After sampling some racy Keuka Lake Vineyards rieslings — including one from the Falling Man vineyard — I migrated to a nearby Finger Lakes sparkling. “How long have you been making this?” I asked. ‘This’ was, it turns out, Great Western Extra Dry Champagne. “Oh, since the 1870s,” said the pourer. I slunk away, hoping I hadn’t tarnished NYCR’s good name with my ignorance about Finger Lakes wine.

A few more sips left memorable impressions: The 2014 Gruner Veltliner from Dr. Konstantin Frank, a floral, racy white that reminded me of some of the best La Crescents made in Vermont. I beelined toward the taut 2013 Gamay Noir from Sheldrake Point, only to be humbled by their luscious, tropical 2014 Riesling Ice Wine, possibly the most delicious wine I tasted that day. 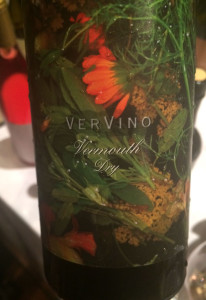 As I grew up on Long Island and was short on time, I bypassed most of my home-turf vineyards. It was impossible, though, not to be drawn in by the buzz around the Channing Daughters table, littered with all kinds of varieties I didn’t think much existed in New York: Ribolla Gialla. Refosco. Blaufränkisch. It was a less exotic name, merlot, on the label of some salmon-tinged petnat that winemaker Christopher Tracy was doling out. “It’s irresistible,” he said to one taster. And it kind of was — layered and exuberant. Hiding behind the vinifera bottlescape was label decorated with vines and blossoms. Vermouth! I’m always wondering why more people don’t make vermouth in these parts, and here were five versions, each flavored with botanicals tied to successive seasons — a vermouth bonanza. VerVino Variation 1-Batch #2, Sauvignon Blanc infused with spring botanicals, was like electric, herb-rubbed sunshine, while other versions were moodier and spicier. This was definitely not the Channing Daughters I knew from when I last visited the East End. “It seems like you’re running a lab out there,” I told the guys behind the table. From the look they shared, perhaps that’s close to the truth.