Early spring vines at Millbrook Vineyards and Winery, ready to do their thing.

During the steep drive up to Millbrook Vineyards & Winery, in some spots the only thing you can see are rows of grapevines stretching to the horizon. The effect can be both eerie and disorienting — wasn’t I driving through the Hudson Valley a minute ago? — especially on a drizzly, raw April day when there’s not a soul, or leaf, in sight.

Looks can be deceiving. Inside the beamed winery — a converted dairy barn — is the clamor and hum of machinery. It’s bottling day for Millbrook’s 2014 Unoaked Chardonnay, and empty bottles glide by on a conveyor belt before being filled with straw-colored wine, corked, and loaded into cases by a handful of workers. “The wines need about a month to settle,” after bottling, says longtime winemaker John Graziano as he takes a break from the action. This is one of the busiest times at Millbrook, besides harvest: In addition to bottling — the Proprietor’s Special Reserve Chardonnay is next up, followed by Riesling and Cabernet Franc — a whole lotta pruning looms, especially after the deep snows of this winter-without-end persisted long into spring, “We’re going to have to scramble,” says Graziano, raising his voice over the rhythmic punch and exhale of the bottling machine. 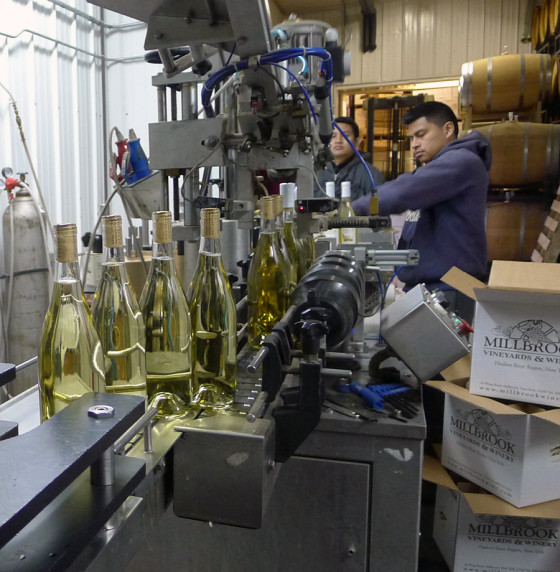 The 560 cases of unoaked chard that he and his crew bottle this afternoon make up but a sliver of the 17,000 cases Millbrook will produce this year, a slight uptick in production from the previous vintage — and a seismic leap from what this winery first produced in the mid-1980s, when New York politician John Dyson planted vitis vinifera grapes back when barely a twig of the stuff existed in Dutchess County.

At the time, Dyson and David Bova (Dyson’s brother in law) went slightly gangbusters with cool-climate varieties, to see how they’d grow here on chilly, southwest-facing slopes with gravelly soils. They planted standard-bearers such as pinot noir and chardonnay, but also northern Italian varieties such as refosco, dolcetto, lagrein, and tocai friulano.

“There was a big learning curve,” says the Cornell-educated Graziano, who joined Millbrook in 1983, three years after Dyson began planting. Though not all of the varieties took, “some of them did okay.”

Perhaps more than okay: Dyson (still the owner), Bova (general manager and vice president), Graziano (winemaker and vice president) survived that early period and found a groove with grapes that thrived on their mostly west-facing slopes. Although ‘thrived’ might be a stretch — in a place with “more rain than we really need” — plus those snowy winters, it takes some vineyard mojo to ripen grapes here. “You have to find the balance between crop maturity and canopy management,” says Graziano, or between giving the fruit enough air and sunlight to ripen while leaving the vine strong enough to bear fruit the following year.

Across the 35 acres of grapes here — about half of them given to chardonnay — yields average 3.5 to 4 tons per acre for white wines, and 3.25 tons for reds.

The group eventually pulled the refosco and lagrein out (“There was a question of, how do you market something like that?” says Graziano). That tocai friulano, though, happened to do well — really well. The wines Graziano made from with it — aromatic, medium-bodied, citrusy but with soft edges, and very food-friendly — earned Millbrook wide renown.

In the past 30-plus years, Millbrook has picked up many accolades and awards — though you might now know it from talking to the humble Graziano. “I’ve never tried to make wines that were too big or oaky. I put more emphasis on balance and integration.”

To wit, the use of oak is sparing here. The Proprietor’s Special Reserve Chardonnay sees 10 months in three- to four-year old French oak barrels, for instance, while 5 to 10 percent of Pinot Noir and Chardonnay see time in new French oak, other wines short spells in neutral oak, and some — including much of the tocai — none at all.

For his Unoaked Chardonnay, Graziano combines his own grapes with fruit from Long Island, all of which he presses from whole clusters. While he appreciates the “tropical, more fruit-forward” quality of the chardonnay he gets from down on the Island, he shows a slight deference for the grapes he’s tended for decades. “Ours has more depth,” he says almost apologetically. (Graziano also buys pinot noir and riesling from the Finger Lakes). He seems satisfied with the 2014 vintage: Last fall, the fruit “had a cool, slow, dry ripening,” which yields a depth of flavor.

There’s one more way to sample the 2014 vintage this year: On tap, if you can find it. For the first time, Millbrook has kegged limited quantities its wines, all whites, branding them as “Local Juice,” after a persistent question from distributors and customers: “Got any local juice?”

“It gives us a new way to grow,” says Bova as we sample the three wines — a pale, featherlight, estate-grown 2014 Chardonnay that’s 12 percent alcohol; a racy and barely off-dry 2014 Finger Lakes-grown Riesling; and the 2014 estate-grown Tocai Friulano. The wines fill  25 20-liter kegs, and are fresh and uncomplicated.

Millbrook has another full year ahead. Between them, Bova and Dyson own a handful of other vineyards (under the moniker Pebble Ridge Vineyards and Wine Estates), and here at Millbrook, in amidst the growing and the winemaking, the tastings and the private events, are classes, too: Graziano will share some of his growing and winemaking knowhow with aspiring winemakers during an eight-part Winegrowing Boot Camp that begins April 18.

As we taste, Graziano admits that he likes to drink Alsatian whites and cru Beaujalois on his own time, and recalls that gamay was once planted here. When I suggest that they give it another spin, Graziano and Bova seem to earnestly consider the prospect for a few moments. Even if they’re humoring me, it’s a brief glimpse of that early spirit of openness and experimentation that still underpins Millbrook’s controlled surface — and likely cements its places as the grand duke of Hudson Valley winemaking.