You’ve no doubt heard the saying “great wine is made in the vineyard.” It conjures up visuals of beautiful rolling hills of grapes in picturesque Tuscany or broad stark valleys of twisted vines in ruggedly scenic Argentina. But, is this true in the Hudson Valley, growing grapes on land perhaps not so commodious? Ask Doug Glorie, he’s made up his mind.

Doug and his wife, MaryEllen, own and operate Glorie Farm Winery in the hills of Marlboro overlooking the Hudson River Valley.  The word “farm” in their winery’s name piqued my curiosity. So on a promising sunny Saturday a couple of weeks ago, we dropped the top of my car, and drove west across the river to Marlboro, NY, to check this place out. 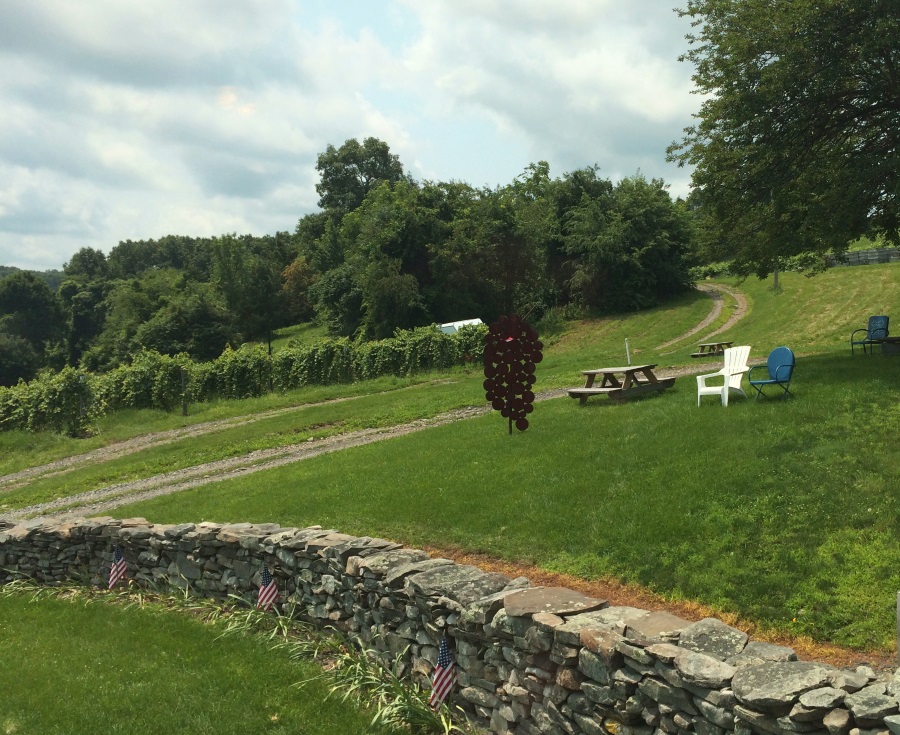 By now, after visits to five wineries on the Shawangunk Trail, I’ve learned that you never know what you might find.  Like our previous outings the road to Glorie winds its way through the Valley with little directness, passing homes and places of businesses of all sorts, some well kept and beautiful others seeming abandoned. We got lost once, but that just adds to the fun. Finally being told we had “reached your destination,” we saw a farm, with barns and equipment, orchards and vines, nothing all that special looking at first, a single sign pointed us toward the tasting room. 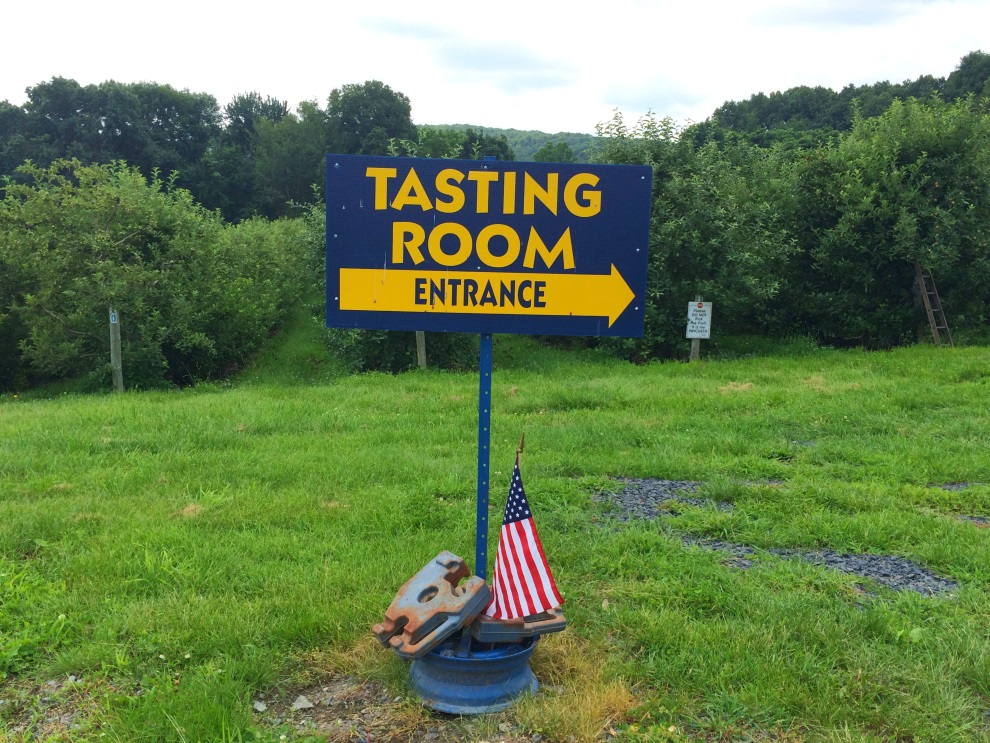 We parked and stopped for a moment, capturing our breath, as we took in the grand view of the valley. 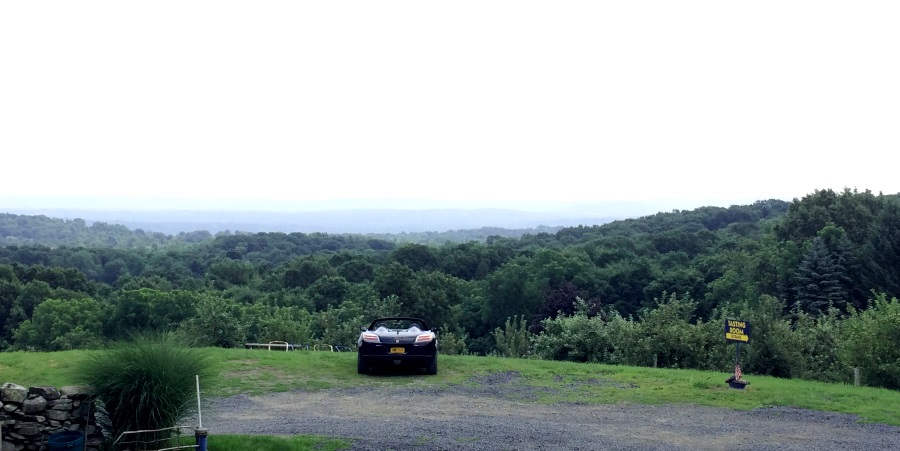 Stepping into the charming tasting room we were warmly greeted by Shannon, who invited us to taste some wine.

You’re also likely to meet Mike in the tasting room, he has been with Glorie for a number of years and does know his wines. 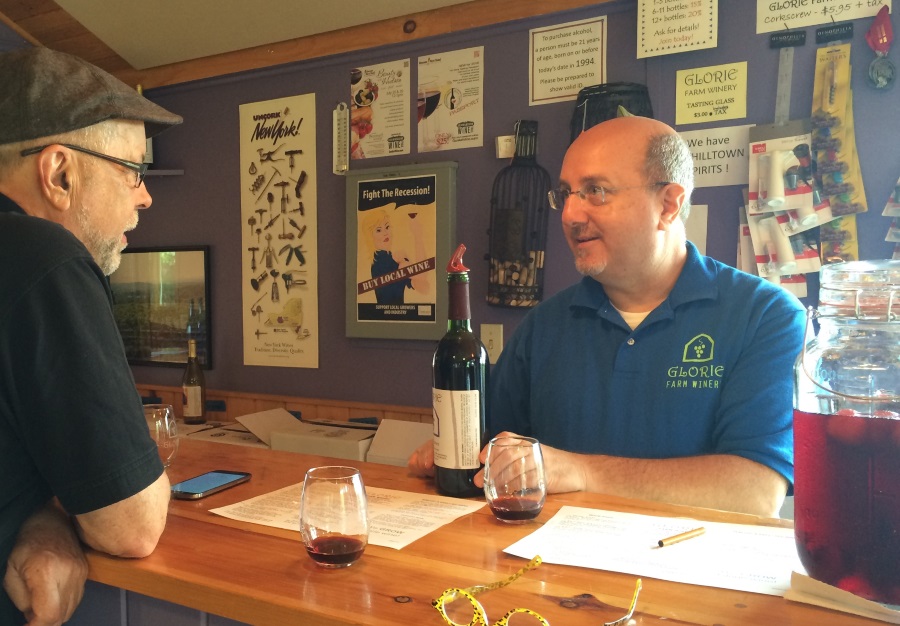 Soon Doug arrived, and while he looks every bit the farmer, it is not hard to picture him in a board room at IBM where he worked as engineer for over two decades. His initial earnest demeanor soon softened as we engaged with interest in his passion for farming and wine, and as our conversation went to travelling in France and Italy and vintage cars.

Glorie Farms has evolved much since Doug purchased the farm in 1979, it was built in 1913, first raising livestock, and then recognizing a greater potential in fruit orchards, he planted trees, peaches, apples, nectarines, pears, apples, quince, and black currants as I recall. Some time in the 1980’s devastating weather wiped out season of  fruit crops.  This became a turning point that opened a new era for Glorie Farms. Doug began planting grapes, something that could be bottled and sold all year.

Some time passed and in 1993 Doug had the opportunity to pursue his passion for farming full time and the real work of grape growing began.  You see even in perfect places like Napa Valley, Chianti, Mendoza, or the like, farming, growing grapes is hard work. And work there was it took another 8 years to nurture the vines to produce a really good wine.  Slowly but surely production grew, the winery was officially opened in 2004 and today produces about 1,200 cases a year.  Glorie wines. with the help of Kristop Brown, has won some awards, but to Doug’s mind he is interested in one thing, that you like his wines enough to buy them and come back for more.

I asked Doug if he found his background as an engineer supported his efforts as a farmer and he said most assuredly so. “grape growing for wine takes patience and a methodical approach.” “We dabbled initially but now are quite serious.” He then rattled off the different techniques they deploy here, like a true engineer.  When asked what distinguished Glorie from other Hudson Valley wineries he pointed to this: 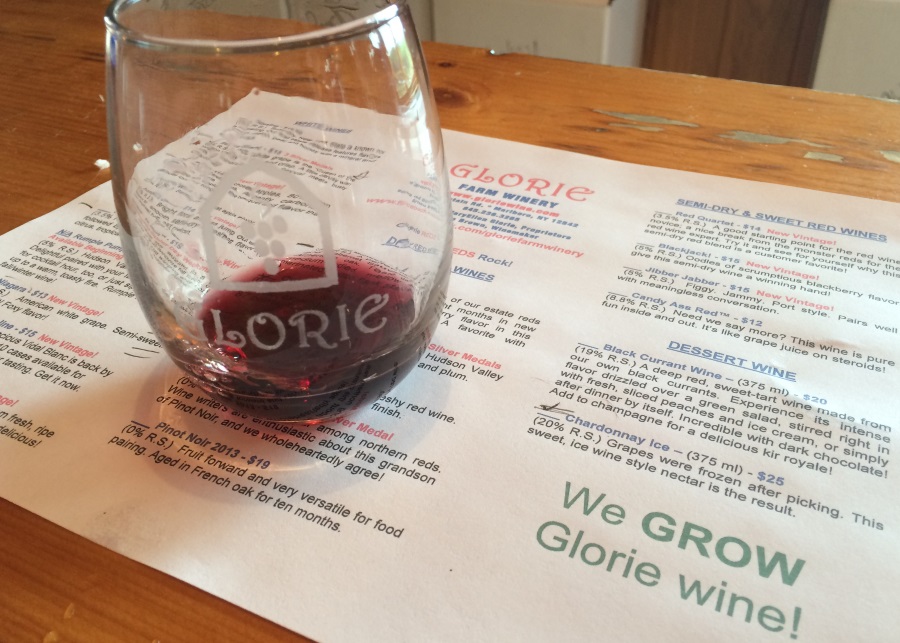 In Doug’s words “we really know how to grow grapes here.” He’s mastered the best techniques for each of their grapes and the lay of the land. You can taste it in his wines, they are crisp, clean, so very fresh tasting. We went through a tasting of several and found then delightfully approachable and satisfying. His Seyval Blanc, and the Cab Franc are very fine. Doug also makes a lot of fruit wines. We didn’t taste these, not our preference, but watched other enthusiastic visitors sip them with smiles.

Doug is working, along with eight other Hudson Valley winemakers, toward making Cabernet Franc the signature grape of the Valley, we agree, it seems to flourish here, like Malbec in Argentina.  He is also very enthused about the potential of a recent planting of Valvin Muscat. This is a hybrid grape developed by grape breeder Bruce Reisch at the Cornell University New York State Agricultural Experiment Station and released on July 7, 2006. We love Muscat and are excited to see how this new wine will be.

At some point we got to the topic of cars, don’t ask me how, on our way out we stopped by to see this pride and joy, a 1958 Chevy Pickup, beautifully restored to pristine stock condition.  Doug also drives in fair weather a “new” 1998 Corvette. 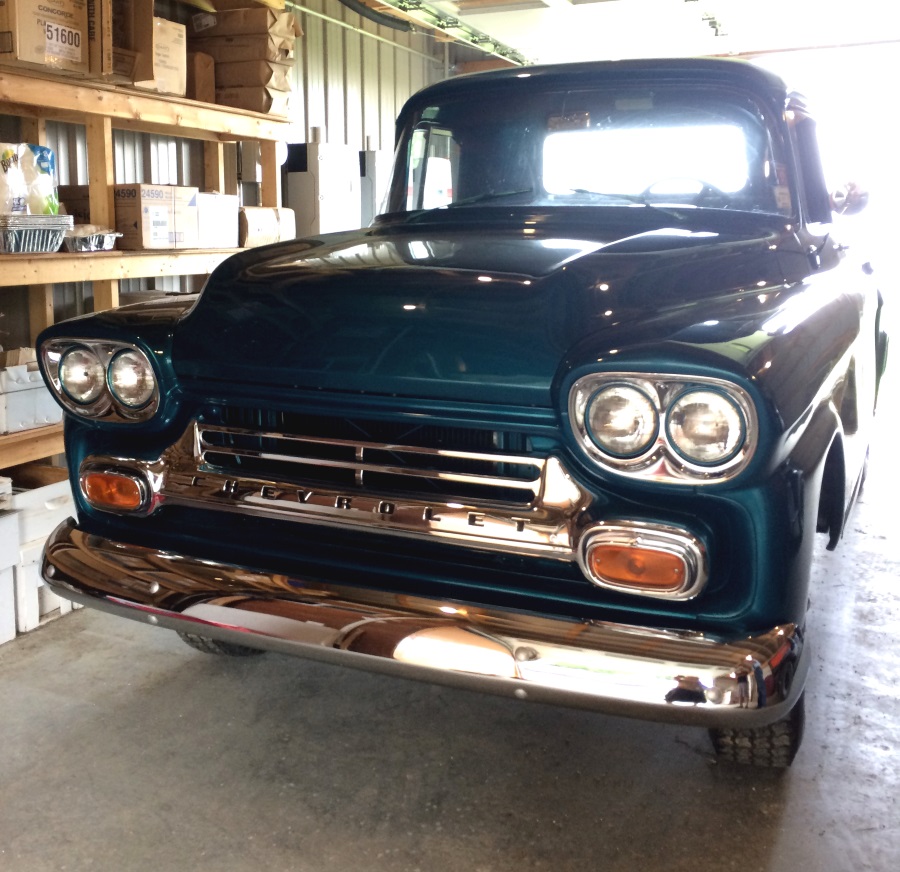 Of course the environment and sustainability are of concern here.  Got make up for the GM muscle gas demands. 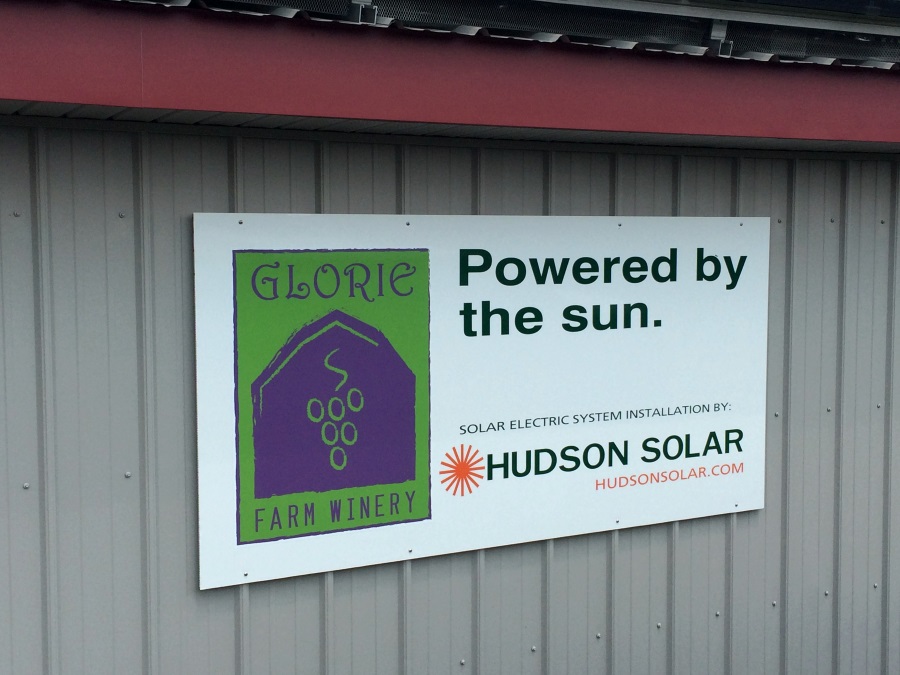 As is the pleasure of the guests. I see MaryEllen’s touch here. 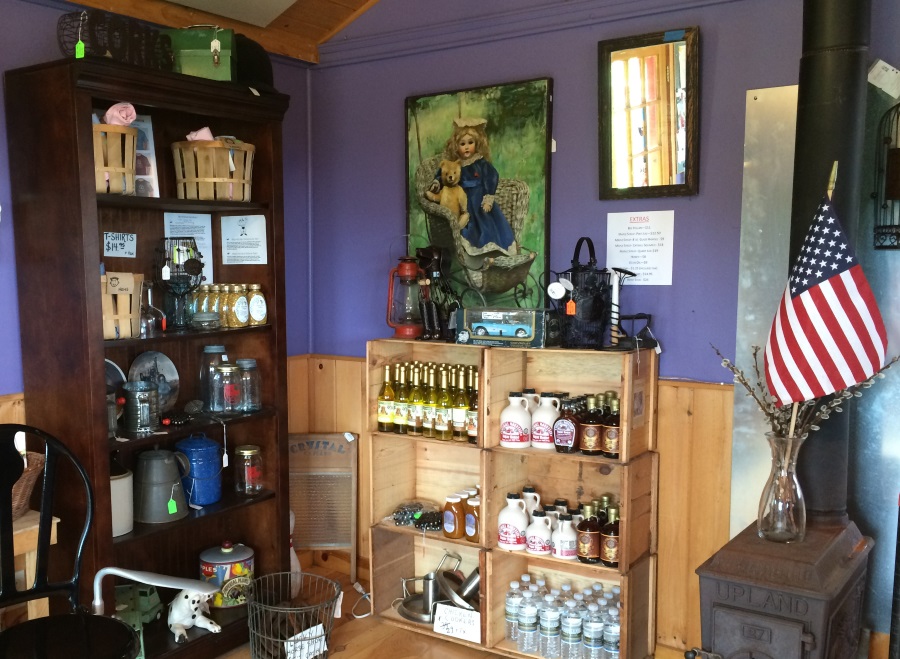