Jim Hundertmark is a man who is living his dream. Most mornings he leaves his modest farmhouse home and walks a few dozen steps across his property to work. For Hundertmark, his workplace is the small, “boutique” winery on the west side of Seneca Lake that he owns and operates with his wife Ruth. Their winery, Lacey Magruder Winery, bears the name of the paternal grandmothers from each of their families.

The couple’s path to the Finger Lakes began in their hometown of Baltimore, Maryland. Like many who live in the DMV area surrounding the nation’s capital, Mrs. Hundertmark built a career as a government employee. That experience enabled her to develop the business skills that would later be essential for owning and operating a winery business. For Mr. Hundertmark, communication skills and a keen customer service orientation were natural by-products of more than thirty years as a hair stylist. Mr. Hundertmark’s other interests in woodworking and home renovation led to his involvement in various construction and remodeling projects outside of his regular work. And an entrepreneurial spirit resulted in his part ownership in an Irish pub in the Fell’s Point area of Baltimore. Both experiences proved to be valuable to the creation of Lacey Magruder. 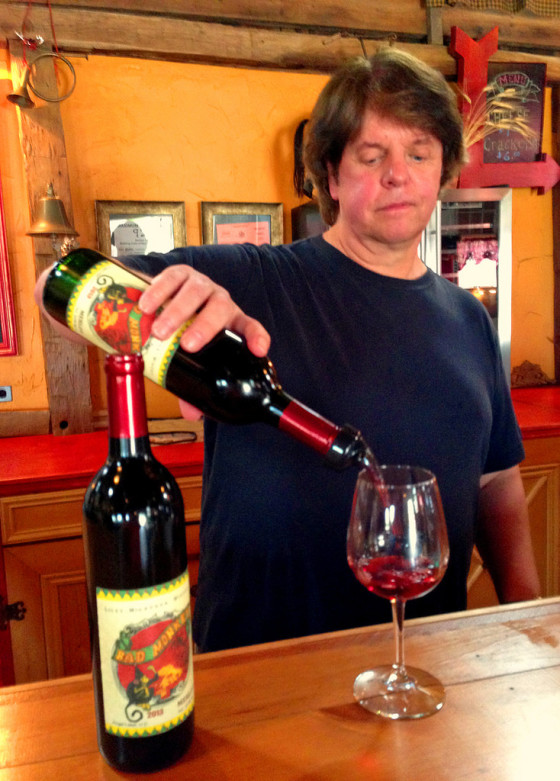 But it was a single, fortuitous event that led them to change their livelihood as well as their lifestyle. “My wife dragged us out to some California wineries years ago on a vacation. I used to drink a little wine, so I went along. I wasn’t too excited. But at the very first winery, I said ‘This is what I want to do!’ I was hooked!”

That single experience ignited their shared passion for wines and winemaking.

When the Hundertmarks returned home to Maryland after that California experience, they started to visit the wineries in their home state of Maryland on a more frequent basis. Eventually they began to visit wineries in nearby Virginia as well. During those trips, the Hundertmark’s interest began to change from wine drinker to winemakers. “We got to know a lot of people during those trips” explained Mr. Hundertmark. “One of the guys I eventually got to know was Jim Law at Linden Vineyards. He had just written a book on winemaking. He compared it (winemaking) to cooking. Being a winemaker is like being a chef. Many years ago I had wanted to go to culinary school. So when Jim Law compared it to that, it really sparked my interest.”

The Hundertmarks soon began volunteering their help at wineries near their home in Maryland. That experience gave them their first exposure to the commercial aspects of running a winery. At the same time, Mr. Hundertmark began to learn the process of winemaking through formal training. “Jim Law likes to have two to three classes a year where he teaches winemaking. So I attended all of his classes to learn everything I could about it” he explained.

The couple also joined a wine club in Baltimore that provided additional “hands on” experience in winemaking. According to Mr. Hundertmark: “We would import our grapes from California. We would do the crush, the whole ten yards. The only thing we weren’t doing was picking grapes. Everything else we did.”

Their ever-expanding interest in wine eventually led them to the Finger Lakes wine region. During one of those trips, the couple began investigating property and the idea of moving to the area on a permanent basis. In a modern day version of the 60’s TV show “Green Acres”, the couple decided to trade in city living for a life in the country.

A depressed real estate market and good timing helped to turn that idea into reality in 2006. A search of Finger Lakes real estate turned up an available farm property that was located less than a mile from the western shore of Seneca Lake near the town of Geneva, NY. “The property had been up for sale for about a year. They actually did an entire article with photographs in the New York Times and got no response. That’s how bad the real estate market was back then” said Mr. Hundertmark. “So our timing was perfect” he added. 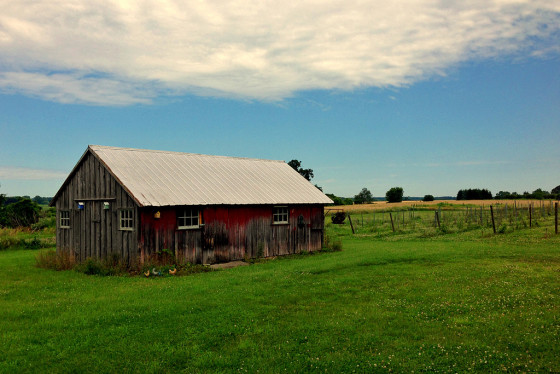 But the property required a significant amount of hard work before it could become the Hundertmark’s home and eventually their winery. “Ruth’s brother is an engineer. He came up and took a look and said ‘I wouldn’t touch it.’ In fact, the guy who owned the property before us was getting ready to burn the large barn down. He thought it was a hindrance to selling the property. The floor had caved in, the walls were starting to cave in” said Mr. Hundertmark.

The couple continued to live and work in Baltimore while making periodic trips to Upstate New York to work on the property. Eventually in 2009, they moved to the area full time.

Before opening Lacey-Magruder, the Hundertmarks leaned more about the region by working at another Finger Lakes winery. “Lamoreaux Landing was our favorite winery when we started coming up here from Baltimore” recalls Mr. Hundertmark. “We had gotten to know everyone there. One day when we were up here, we just stopped by and asked ‘Do you need some help?’ It turns out that they did. They needed somebody in the tasting room, so Ruth went and worked there. Eventually, they needed somebody to work in the cellar also, so I came in.” That relationship proved to be valuable later to the establishment of the Hundertmark’s own winery: “When I told them that I was thinking about opening a winery, they said ‘Okay. You can buy your grapes from us if you want. And we can help you out down in the cellar here.’ That was great for us and saved us a lot of money. We didn’t come into this with a ton of money.” He added, “We’ve been very lucky being able to work with Lamoreaux and have not had to purchase all of the equipment ourselves. A lot of wineries don’t see profits for years because of that expense. We were able to see a profit from the very beginning.”

Like many winery owners in the Finger Lakes, the Hundertmarks have high praise from the level of partnership and cooperation among wineries. In addition to their strong working relationship with Lamoreaux Landing Wine Cellars, Lacey Magruder has also benefitted from their connection with a neighboring Seneca Lake winery, Lakewood Vineyards. Mr. Hundertmark commented: “We have also worked with Chris Stamp from Lakewood. He’s a great guy and has been really helpful to us. I occasionally go there to make a wine. In fact, we did a Riesling project together. He does a really good job with Riesling and has won many awards with it.”

When it comes to Lacy Magruder’s wines, the Hundertmarks follow a simple philosophy – their main focus is on making wines that they themselves like to drink. Originally, that led them to make primarily dry wines. Over time, they have added a few wines that would appeal to customers who have somewhat sweeter palates. “My wines don’t get sweeter than 3.5%” explained Mr. Hundertmark. “That isn’t sweet enough for some people. We are always looking at which wines we should make for our customers. But it’s going to be hard to make anything too sweet because we don’t like to make wines that we don’t like to drink ourselves.”

Lacey Magruder also produces a number of white wines including a semi-dry Riesling, two versions of Chardonnay, a Vidal Blanc and a proprietary blend called Lot No.1 Cuvee.

All of the wines are produced in small quantities, with a typical production of seventy cases per vintage. Due to the limited quantities produced, Lacey Magruder wines are not available at retail and can only be purchased in the winery’s tasting room. According to Mr. Hundertmark, there are no plans to expand production at any time in the foreseeable future. “We want to keep it to just Ruth and me” he explained. “One of the things that we have always wanted is to either have Ruth of me in the tasting room whenever we’re open. You don’t always have a winery owner in the tasting room, which is something that makes us different” he added.

When it comes to the decision to open a winery and the challenges that come with running a small, independent business, the Hundertmarks have no regrets. “It really hasn’t been a challenge. We wouldn’t have gotten into this if we thought it was going to be a challenge. Before we got into this, I wrote down on a paper all of the things that I enjoy doing. And everything associated with this business is something that I really enjoy doing. So it’s never a challenge or a headache.”

But what else would you expect from someone who is living their dream?