The first Saturday tasting at Copake Wine Works felt slightly subversive: Standing behind a table in the front window, co-owner Christy Frank splashed Greek white and Moroccan syrah into the glasses of customers who were possibly more used to tried-and-true Chardonnay and G&Ts on lazy August afternoons. The wines were quenching, though, and well-priced, so many left with bottles of Semeli “Mountain Sun” Moschofilero and Ouled Thaleb Syrah cradled in their arms.

On Instagram, Frank has called Copake Wine Works, the three-month old wine shop she and her husband, Yanai, run in this sleepy upstate village, “Frankly Wines North,” and its shelves offer a mashup between the small-production and offbeat wines Frank sells at her Tribeca wine shop, Frankly Wines, and a sprinkling of mainstays that upstate clientele might feel more comfortable with.

Though they work together closely, the shop officially belongs to Yanai — and it came about almost on a lark: The Franks visited this rolling stretch of Columbia County many times before buying a place here last year. One morning last spring, as they ate in the Copake Diner, they discussed the impending closure of the wine shop in Hillsdale, ten minutes up Route 22. It would leave a broad swath of the area without a wine shop, they agreed. “Where would be a cool place to open a wine shop?” Frank asked her husband.

As it happens, there was a ‘for sale’ sign in the window of the building across the street — the boxy, brick Copake Pharmacy, which had operated for decades in a converted turn-of-the-century barn but had also shuttered. “Very quickly, we tracked [the owner] down,” Frank said.

The couple were soon in possession of the 3,000-square-foot space, still filled with sunglasses, bottles of rubbing alcohol, and three-year-old newspapers. With just a few weeks to go until the busy summer season, the Franks didn’t change much: They cleared and rearranged the shelves and then filled them with dozens of old-world numbers such as Bourgueil, Arbois, Montecucco Rosso, as well as wines from Dirty & Rowdy and Broc, a handful of German and Greek wines, and dozens of spirits. They also coaxed former Frankly Wines’ employee Danielle Potter — who had moved to the Hudson Valley the prior year — into managing the store. And by June 22, Copake Wine Works was open. 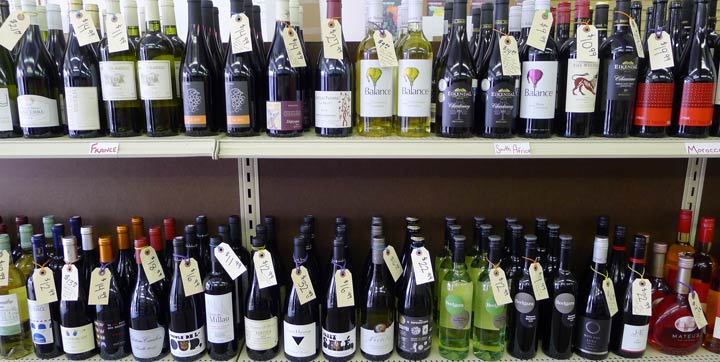 With its fluorescent lighting and beige metal shelves, the store feels almost like a 1970s time capsule, but looks are deceptive — there’s a lot of soul on the racks, including a growing cluster of local wines and spirits, such as Keuka Lake Vignoles, Southhold Farm + Cellar’s Artful Dodger, and wines from nearby Hudson-Chatham Winery. Frank called that winery’s Chelois “pretty and elegant, and in a blind tasting, it could almost be mistaken for a cru Beaujalois.” And of Hudson-Chatham’s Ghent Blush: “It checks all the boxes,” for customers who want sweetness, “but still has depth and charm.”

Old-World wines are well-represented, too, and many offer a springboard to guide customers in new directions. “People have heard of Malbec — it’s a grape they like, but they tend to know it’s from Argentina,” Frank said, grabbing a bottle of Domaine Vincent Caillé La Part du Colibri Côt. “This is fresher, lighter, a little cooler climate. So you can start to talk about wine.”

The Hudson Valley’s booming distilling scene is reflected here — stalwart spirits such as Tito’s Vodka rub shoulders with bottles from Dutch’s Spirits, Hillrock Estate Distillery, and Harvest Spirits Distillery in Valatie. “This is really wonderful, silky with a savory quality,” Potter said of Harvest Spirits’ John Henry Single Malt Whiskey. She ventures to wineries and distilleries every few weeks for research. “We’re working hard at expanding our spirits collection,” Frank added. “Every week, we try to bring in a new wine or spirit from New York state.”

Frank called the thirst for spirits in Copake “robust,” and to draw that market in, a collage of black-and-white sheets in the front window spells out WE HAVE LIQUOR, TOO. As for the wines, a high percentage fall into the $15-and-under category, and the Franks moved some of the more adventurous (and expensive) wines to a “treasure wall,” off to one side. After Frank placed a bottle of 2003 Chateau Musar back onto the treasure wall (“This is one of the wines that got me into the business,”) a harried man who looked like he’d been working outside all morning rushed into the store, looking for a bottle of Cuervo. When he saw only Espolón Tequila, he placed an apologetic phone call to a friend.

He looked up from the phone. “No Cuervo?” he asked Potter, who shook her head and cheerfully told him they’re constantly expanding their spirit section. Later this fall, when things slow down, they also plan to revamp the interior, add some hard ciders, and lease out the space next door. For now, Copake Wine Works still retains some of the vibe of a place you come for your meds — Valdigue and Grüner, Normandy pommeau and Hudson Valley moonshine. 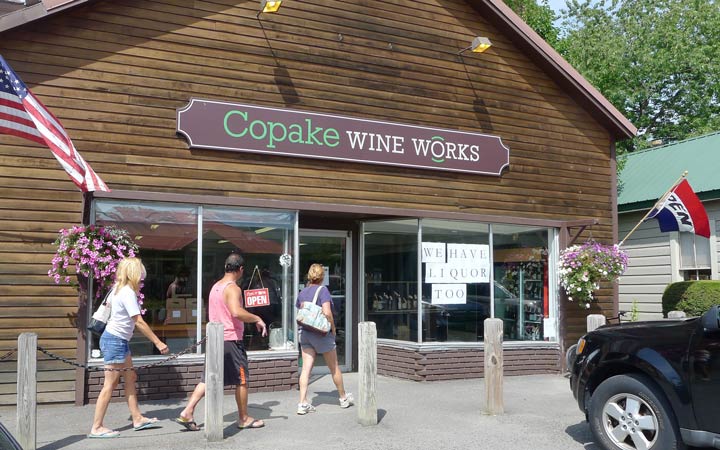