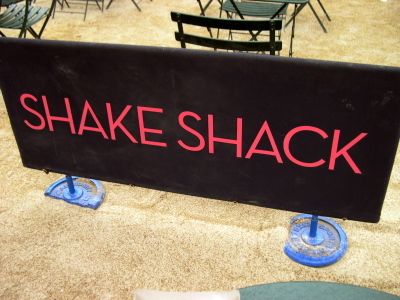 So yesterday I took a rare work-week trip into NYC for the Long Island Merlot Alliance’s pre-release party for 2004 Merliance, a 100% merlot wine made from the best lots from the participating wineries.

More on the wine and the event later this week. Today we’re focusing on my lunch.

I’ve read about Shake Shack a few times, mostly on blogs. But, when Frank Bruni wrote about it reopening for the spring a while back, I decided it was time to make my own visit.

Of course, what started off as a beautiful day on eastern Long Island gradually got grey and then darker grey as I travelled into the city via train. By the time I actually got to Shake Shack, it was drizzling rather steadily. But, that was too my advantage as the line was much shorter than it would have been.

I enjoyed a shack burger, cheese fries and a glass of Trevor Jones Shiraz.

The fries: not bad. With the drizzle they got soggy almost instantly (yes, I still ate outside, they don’t have anywhere else!

The wine: good. They served it a bit too cold for my liking (almost chilled really) but I’d prefer that to warm. Didn’t take notes, but it was a typical Aussie shiraz…but a little less jammy and with flavors beyond the regular fruit.