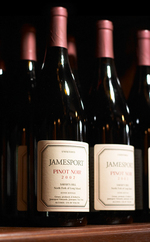 Winemaker Les Howard’s 18-plus months at Jamesport Vineyards have been some of the craziest of his winemaking career.

There was the stressful-but-successful 2005 harvest season that may prove to be one of Long Island’s finest. There’s how he’s developing his own style as head winemaker while maintaing the quality Jamesport is known for. And recently, he’s been able to enjoy impressive scores from Robert Parker’s Wine Advocate.

"Things cannot be much better here at Jamesport," he wrote recently in an email.

Howard, a Long Island native, "never thought of being a winemaker" when he first started at Pindar Vineyards over a decade ago. It was only once Mark Friszolowski, then Pindar’s winemaker, told him that he’d make a good winemaker that he considered it as a career option.

After five years at Pindar, Howard also worked for Osprey’s Dominion Vineyards, Wolffer Estate Vineyards and Bedell Cellars — where he got to work with some of Long Island’s most respected winemakers, including Roman Roth (Wolffer) and Kip Bedell (Bedell Cellars).

Roth, in particular seems to have influenced Howard greatly, "Working at Wölffer, with Roman, was the turning point in my career,” Howard said.

The post at Jamesport is Howard’s first as head winemaker, and he’s made the transition rather smoothly. "I’ve been in the industry here on Long Island since 1994 and have worked at four larger, established wineries. Now as head winemaker I can use the skills I’ve learned throughout my career and develop my own winemaking practices," he said.

The biggest surpise for Howard has been "how rewarding it is to make great wine and be credited as the winemaker." And make great wines he has — already.

Many of the wines rated highest in the recent issue of the Wine Advocate were started before Howard joined Jamesport, but he bottled their 2004 Late Harvest Riesling. In addition, David Schildknecht, who tasted and reviewed the wines of Long Island for WA, "…liked the 2005 sauvignon blanc and said the 2005s from barrel were highly promising," according to Howard.

But do the high scores — largely for wines made before he took over — put any added pressure on Howard? If it does, Howard won’t admit it, saying "The high quality of the previous vintages Jamesport has produced is why I chose to work here. This makes me feel great that our wines are so well regarded. Also this makes me even more confident that we can continue to make excellent wines."

In addition to the highly popular 2005 Sauvignon Blanc, which offers green apple, grapefruit and vanilla-earthy aromas and melony, appley and slightly tropical flavors with earthy and vanilla-honey notes on a lengthy finish, Howard has recently bottled his 2005 chardonnays, which he calls "wonderful".

It’s the 2005 red wines that excite Howard the most, however. "These (red) wines are what I consider the best I have ever worked with! (But) we will have to wait until they are finished maturing in barrel and bottled before we can acertain their true greatness."

Heading into the 2006 harvest season, Howard is looking forward to his second harvest with Jamesport Vineyards’ owner and vineyard manager Ron Goerler Jr. "I’m looking forward to it. The vineyards are performing well and we are expecting a nice crop. The crop is not going to be as large as last year but does have the potential for high quality."

Look for Jamesport Vineyards’ 2005 chardonnays to be released this fall, with the reds still needing time to mature. In the meantime, enjoy that impressive sauvignon blanc and Jamesport’s East End Series of wines, which help support the Southold Project for Aquaculture Training (SPAT). Ten-percent of sales go to the program, which was created to encourage East End residents to become stewards of their environment and help revive the shellfish population in local waters.