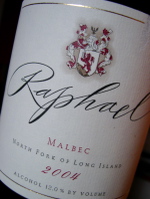 Don’t cry for me Long Island?

Yes, there is malbec growing on Long Island — and probably more than you realize.

Once a major component in the wines of Bordeaux, this large, fairly easy-to-ripen black grape is now best known in Argentina, where it is most often bottled alone, and as a bit player (along with cabernet sauvignon, cabernet franc, merlot and petit verdot) in in Meritage and other blended red wines in U.S., Australia and South Africa.

So it only makes sense many of Long Island’s meritage-style reds feature small amounts of malbec — typicaly from 1 – 7%, but it’s rare to see a varietal bottling that is all — or mostly — malbec.

But, in a game of vino role reversal, this bottling from Raphael is 95% malbec with just a little (5%) merlot blended in.

Winemaker Richard Olsen-Harbich describes the 2004 vintage as a "return to normal growing conditions" on the North Fork. The summer was rather dry, but somewhat cool, which makes it somewhat "similar to the wines made in 2000." This is the second time that Raphael has bottled a malbec and it’s only available through the Raphael Reserve Club, their wine club. Only 75 cases were made.

A deep violet-crimson in the glass, this wine has an intense nose of black currants and other black fruit, black tea and cedar. With time in the glass, these secondary aromas strengthen and evolve.

As the evening went on, this wine continued to evolve and develop…very nice.