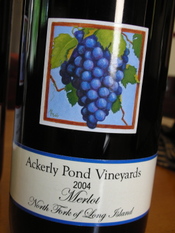 Over the past decade-plus, there has been an interesting phenomenon in Long Island wine, though it’s probably mere coincidence. It seems that even-numbered
years tend to be cooler than the riper odd-number
years, which include the well-regarded 1995, 2001 and 2005 years.

Of
course this isn’t a hard and fast rule.

And it certainly doesn’t mean that there aren’t terrific wines
in the cooler years. In fact, some of the most underrated wines–both
red and white–that I’ve tasted lately have come out of the 2004
vintage, a slightly cooler, but still typical local year.

Founded just less than a
decade ago by Ray Blum (who founded Peconic Bay Vineyards, now Peconic
Bay Winery, in the 1970s) Ackerly Pond Vineyards said good by to its
founder this year, but his family continues to manage the operation.

Ripe and flavorful, it’s medium
bodied with intense blackberry flavors accented by dark chocolate,
vanilla and sweet oak. With little more structure, this would be a standout, but it’s still a beautifully elegant red that will shine best on the dinner table.