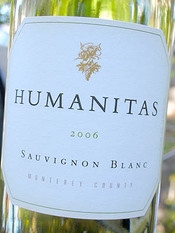 News Flash: I’ve found some California wines I can enjoy, afford for every day drinking, and feel good about.

Humanitas Wines, founded in 2001 by Judd Wallenbrock, is a California winery unlike any you’ve heard of before. Seriously.

Many wineries are involved in philanthropic endeavors. They host fundraising events or give a portion of wine sales proceeds to various causes, but Wallenbrock takes that to a whole other level. All of his profits go to charity. Every cent. Specifically, the profits are donated to address three primary issues – hunger, affordable housing, and illiteracy.

A two decade veteran of the California wine business, including stints at prestigious Robert Mondavi and De Loach wineries, and his current gig at Michel-Schlumberger Wine Estate, Wallenbrock founded Humanitas because, his "passion is in the enjoyment of wine, my expertise is in building strong wine brands, and my heart is in philanthropy."

But these wines aren’t run-of-the-mill plonk. He describes his desired style as ‘over-deliverance’ meaning that his wines deliver quality beyond their price points.

Wallenbrock told me earlier this week that he wants people to say, “Wow, that is a wonderful wine. So approachable, yet pretty darned complex. Oh my gosh, it only costs that much? Fantastic, and, oh my gosh number two — the profits go to charity? Sign me up!"

He strives for a style where "one sip invites another" where the whites are about fruit, not oak, and a cabernet sauvignon that offers "a great nose up front, full middle body, and soft, sweet tannins on the finish."

Best of all, these wines are affordable because he sources the grapes for his wines in the Central Coast and he doesn’t have his money invested in a big estate and a big winery. Of his operation, he says, "I have zero overhead because I functionally ‘rent’ space to make my wine in other people’s wineries…and I focus on nothing but the wines and the charitable contributions."

Humanitas’ latest releases—two whites and that cabernet—are all priced under $20 and avoid the overmanipulation found in many California wines at their price points.

Wallenbrock made 490 cases of his Humanitas 2006 ‘Oak Free’ Monterey Chardonnay ($16), it is a fine example of why I love unoaked chardonnay so much. The nose offers lemon, apple, and a faint hint of pineapple. On the palate, it is medium bodied and shows loads of apple flavor with just the most subtle tropical notes. There is just enough acidity to bring balance. All in all, this is a nice wine, and this definitely isn’t your typical flabby, over-oaked Cali chardonnay.

Many of Long Island’s most exciting whites are made with Sauvignon Blanc, but I’ve long found many California bottlings less tasty. It seems like some West Coast winemakers like to treat Sauv Blanc as if it is chardonnay.

But again, Wallenbrock eschewed all oak in making his Humanitas 2006 Monterey Sauvignon Blanc ($14) which is fresh and delicious. It’s fairly simple, but the clean, pure grapefruit and mandarin orange flavors are well balanced by acidity in a medium-bodied package. At $14 — and with screw cap closures — this is a terrific house white. Fewer than 300 cases were produced.

The Humanitas 2005 Paso Robles Cabernet Sauvignon ($18) is a fruity (no surprise) cab with well integrated tannins. The aromas and flavors are all about blueberries and subtle brown spice — almost reminiscent of blueberry pie. He’s hit the style he’s going for on the head here. And while this is more a cocktail wine than anything else, it’s better than many California cabs I’ve had for twice the price.

When I asked Wallenbrock what his short-term plans are for Humanitas, he said that, "Humanitas will have a sub-$20 tier always — to allow people to ‘drink charitably’ just about every day." But he is also planning to release some small lot, vineyard designated wine within the year.

"I have about 80 cases of a 2005 Napa Cab from the Caldwell Vineyard about to be bottled — in the Vino-Seal closure, the glass bung-like closure — that will be released in the Spring. I also have a little Pinot Noir, Cab Franc, and Malbec — all in tiny quantities coming out next year. Really fun stuff."

Between his full-time "day job" and running Humanitas, I had to ask him how he keeps going, how he finds the energy to do it all.

"What keeps me going is knowing that I’m doing something really good for the world. I have a vision that wine can and will change the world, and I’m leading the charge. I really like the artistic side of the wines I make — it balances my life a bit. And, I believe that someday Humanitas will be discovered by someone I can truly partner with to take it to the next level — one where it can grow to the level where it really makes a difference, both financially for charities and emotionally for how people make their purchase decisions. There are literally tens of thousands of wine choices out there – Humanitas actually has clear point of differentiation and a compelling ‘reason to believe’. This is what revs my engine."

To order these good wines and good prices for even better causes, visit www.humanitaswines.com. You can even choose which of Wallenbrock’s chosen charities your purchase goes to.

This story originally appeared on Hamptons.com