The wine tastings at Standing Stone Vineyards are hardly typical, but then again, owner and winemaker Marti Macinski isn’t your average wine industry professional. A former lawyer with a degree in piano performance and philosophy, Macinski purchased the winery with her husband Tom in 1991; they’ve been making wine since 1993.

With 9 of us seated in the main tasting room around a low picnic table outfitted in a white tablecloth, it felt more like an intimate gathering of friends than a strict and serious tasting. 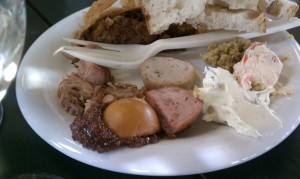 “I just want to begin by stating that yes, we are wine geeks.’” Macinski started. “But our customers are, too, so I think that works.” She went on to explain that, unlike traditional tastings that focus solely on the wine at hand, we would be pairing food from the recently James Beard Award-nominated Dano’s Heuriger down the road. “I know that’s kind of quirky, but as soon as you take a sip of this wine, you’ll say ‘Ooh! I want a sausage! And some cheese!’ You’ll see. Pretend you’re in Alsace for the purpose of this tasting.”

Plates were passed of Dano’s signature cream cheese-based spread, olive bread, sausages and cabbage strudel. As we helped ourselves, Macinski began passing bottles in the order of ascending year, instructing us to pour a “one-ish ounce” taste for ourselves.

“The bottles are still dusty. I was going to clean them but then thought ‘No! It’s authentic!’” She dissolved into sheepish laughter after revealing the ‘96 cork a palmful of pieces that had crumbled during extraction.

The oldest three vintages were closed with natural cork – and all suffered the fate of the ’96 – but the ‘06, ‘08 an made use of a Nomacorc, and the ’09 made use of a technical cork. The technical cork is favored by Standing Stone because they believe most of their customers purchase wine for immediate consumption. “This number will shock you, but 98% of wine purchases are consumed within 24 hours,” Macinski said. “Knowing that, we didn’t want our customers to have to deal with broken natural corks.” Still, Macinski worries that the Nomacorc is allowing excessive air into the bottle, rapidly speeding the natural aging process.

Tasters were encouraged to sip at their own pace — in whatever order they desired — as Macinski discussed the finer points of the grape. 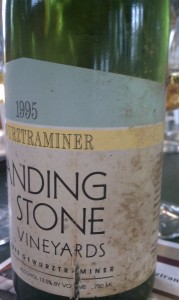 Macinski likes her Gewurztraminers big and bold, and that’s how Standing Stone makes them.

The grapes sit for a quick stint (24 to 96 hours, on average) with their skins, a move that doesn’t necessarily impart tannic structure, as with reds, but lends a bit more heft and body to the wine. “It gives it a certain ‘Gewurz-ness,’” Macinski explained with a shrug of her shoulders and another laugh.

I started with the 2009, a pale straw color in the glass with an orange blossom nose. “It has potential,” I wrote in my notes as Macinski alluded to as much. “It’s just not Gewurztraminer yet,” she said with a dreamy sigh. “Though this did get a nod from Wine Spectator as the daily pick on March 29.”

The 2008 was a huge lesson in contrast, the color of liquid gold with a nose that revealed so much musk I wrote “POW!” in my notes. It’s their current vintage, and after a “classically normal” growing year with plenty of sun, a fine and honest representation of Standing Stone’s distinctive style.

The 2006 was lush on the mid-palate, veering toward fat. While the rest of the older vintages we tasted were aging nicely, Macinski offered some simple advice. “Take it from a winemaker: drink this soon. It’s good.”

The 1997, a surprising and attractive lemon-lime color, was well-rounded and full, with qualities of cilantro and lime that cut through the richness, as well as lingering hints of cardamom. It was, by far, my favorite wine of the evening and paired extraordinarily well with the buttery pastry-encased cabbage strudel.

The 1996, a musty, heavier sample with an oily mouthfeel was revealed as Macinski’s favorite (though only after I asked).

The 1995 was largely considered by our group to be a bit past its prime, but I liked its austere and elegant qualities coupled with a perfume-packed nose.

The connective thread between all six vintages — if there is one — seemed most easily defined as a persistent pleasantly bitter edge (think Campari, rather than undressed dandelion greens) that was reminiscent of both fennel and grapefruit; a bit of a puzzle in an otherwise full and lusty white wine.

“That’s our region; it’s what we do. We have a great ‘green’ quality to this grape. Why not embrace the green?” Macinski said.

I tend to avoid organized wine tastings on account of a strong aversion to (and admittedly unfair generalization of them as) exercises in snobbery. But Standing Stone is doing something right with theirs. “We don’t just sit and drink,” said Macinski as the afternoon wrapped up. “We sit and eat and drink and talk.”