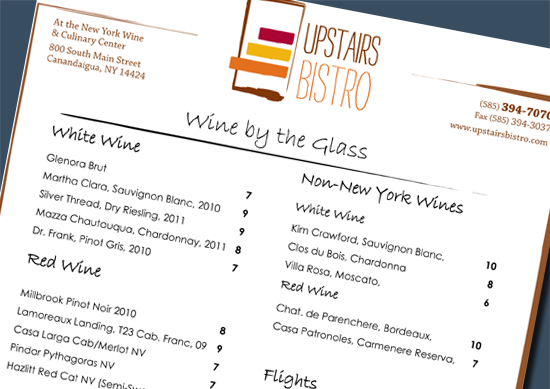 [quote]The New York Wine & Culinary Center will excite, inspire and engage New Yorkers and the world in a celebration, understanding and appreciation of New York wine and food through educational programming and partnerships, making it a part of their everyday lives.[/quote]

That excerpt from the New York Wine and Culinary Center’s (NYWCC) website would seem to say it all. New York deserves a place to showcase its agricultural wonders without the distraction of other regions.

Unfortunately, according to a recent email newsletter from the New York Wine & Grape Foundation,  the newly renovated restaurant at the NYWCC,  now known as the Upstairs Bistro, has significantly changed its wine list. The list, which previously listed only New York wines, will now list fewer wines from New York and include non-New York wines.

[quote]Upstairs Bistro officially opened last Friday at the New York Wine & Culinary Center in Canandaigua, with a new name, a new look, a new menu, and a new wine list.  Formerly the “Taste of New York” restaurant, the Upstairs Bistro includes a bar area, main dining room, and seating on a wrap-around deck overlooking Canandaigua Lake.  The decor features brighter colors and a wine bottle with flowers at each table.  The new menu includes reasonably priced starters and salads, pizzas, light fare and sandwiches, entrees, side dishes and, of course, desserts.  The selection of New York beers has been expanded while the number of New York wines has been greatly reduced to 10 choices from various regions, now joined by wines from California, Chile, France, Italy, and New Zealand.  The wine list, menu and other information are at www.upstairsbistro.com, which includes a “Contact” option for comments or suggestions; or email info@nywcc.com, phone 585-394-7070.

Yes, you read that right — wines from around the world being sold at a place that purportedly exists to celebrate New York wines, beers, spirits and foods.

Not surprisingly, some in the New York wine industry are — I think rightfully — disappointed by this decision.

“There’s a lot of hard-working people in this state who struggle mightily, not only to produce quality products, but for recognition of those efforts. It seems unconscionable to me that an entity that wears the badge and flies the flag for New York winegrowers and farmers would throw that same dirt in our faces. The local food and local wine movement is sweeping across the nation – how can any one place be so far on the wrong side of a trend?” said Jim Silver, General Manager at Peconic Bay Winery.  Carlo Devito,  owner of Hudson-Chatham Winery even took the occasion to write a mock news story, implying that the non-New York wines were mocking the New York wines.

He is not alone. Others contacted me privately but declined to speak on the record.

The question that must be asked is simply, why?

In an email, Jim Trezise, President of the New York Wine and Grape Foundation and member of the NYWCC board, told me  that he thinks the Bistro’s wine list should only include New York wines, saying “I was unaware of this decision until after the ‘ribbon cutting’ (ceremony), and was not consulted. ” He added, however, that the Foundation has never had any input into the NYWCC’s wine selections.

Next, I emailed Alexa Gifford, Executive Director of the NYWCC, who yesterday told me that their “focus has been and will continue to be New York” but that “We did add five non-New York wines to our wine selection to meet customer requests.”

She also characterized the non-New York wines as a “trial” saying that they would “track the wine sales.” Since the Upstairs Bistro on May 18, 81 of the 84 bottles of wine sold have been New York wines.

Taking a look at the wine list (which has been removed from the NYWCC website) the non-New York wines include a Kim Crawford Sauvignon Blanc and a Clos du Bois Chardonnay, both distributed by Constellation Brands, whose CEO, Robert Sands, serves as President and Chairman of the NYWCC board.

Gifford told me yesterday, however that “Mr. Sands was not involved in the wine selection process at all.”

My plan for early this morning was to dig deeper to find out just how the wine list is put together — the who, the how and the why. Why choose mediocre Bordeaux or New Zealand sauvignon blanc when there are better wines made on Long Island? Why pour an Italian Moscato when there are off-dry sparkling rieslings available in the Finger Lakes? And perhaps most importantly, why choose Constellation Brands wines, risking the perception that Mr. Sands may have perhaps undue influence?

But then I received an email from Gifford today telling me “We have already pulled the non-New York wine off the list. ”

That is, of course, the correct decision regardless of any sales numbers. Customers visiting NYWCC should be greeted with the best New York has to offer. They deserve it and so do the farmers, brewers, distillers and winemakers of the state.

Gifford signed off her last email to me earlier by saying “The NYWCC has purchased nearly $2 million of New York wine since opening and will continue to support and promote New York agriculture.”

For that the NYWCC should be commended. Hopefully the decision to sell non-New York wines was nothing more than a one-time mistake.