Usually the way the game goes, someone gives us a hint, say Barolo, and we have to guess the name of the grape (Nebbiolo) to win the prize or score some points.  Yesterday, I received a couple of interesting emails from a list put out by Cornell Enology Extension Associate Chris Gerling that were more than mere fun and games.

Chris is a sharp guy and quite a joker, yet someone who I take very seriously in matters of cold-hardy viticulture and wine geek info.  In this case, he passed on word about a bit of sport where we know what the grapes are, but need to generate official names for their commercial release.   There is no real prize in this particular game, other than the “lasting glory and fame” promised by the folks at Cornell to that lucky and creative person, who will be mentioned at the release and in publicity.

It takes a heck of a long time for grapes to make it successfully through a breeding and selection program.  They spend most of their young lives stuck with arcane alphanumeric noms du vin, until when showing promise, they sometimes get a nickname by researchers and growers.

One grape I like to work with, ES-6-16-30, is an unreleased Elmer Swenson selection. It makes a simple muscadet style wine that I have used as part of a  blended cuvee for bubbly.  Here we call it by it’s technical name, but in Finland they have been allowed to call it Adalmiina.

When — and if vines — truly prove themselves, they need to take on a new names, that are “unique, distinctive, and descriptive, look good on a wine bottle, and meet a variety of complicated legal specifications that you don’t even want to think about.”

So Cornell is asking the New York wine industry to help with the process of naming two grapes that are up for release:

If you’d like to try your hand at naming grapes, take a look at the variety descriptions for NY 76.0844.24 and NY 95.0301.01 below.  Be as creative as you like, keeping in mind that names have to be unique- no reruns- and should be designed to sell varietal wine.  Send as many creative names as you can think of to Bruce Reisch at bruce.reisch@cornell.edu by August 6, 2012, and we’ll put them on the list.  We’ll do the all the legal footwork to check for trademark violations and such, compile a shortlist of possibilities, and have a name for you soon!
Thanks for your help, and we look forward to seeing your creative names!
Bruce Reisch & Anna Katharine Mansfield 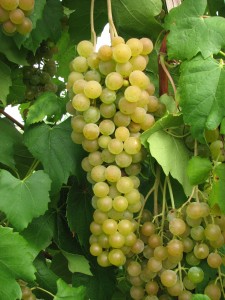 and cold damage to trunks is rare. Wine quality is excellent, showing aromatic characters that panelists compare to Gewürztraminer or a citrusy Muscat.

NY95.0301.01 is a red wine selection, and is the first introduction to originate from the “no-spray” portion of the Geneva breeding program.  It’s highly resistant to both downy and powdery mildews, making it a good choice for sustainable or organic growers. The wine is dark red with little or no hybrid character, and exhibits moderate body, good structure, and blueberry on the palate.

I’m not familiar with NY95, but I did get to work with NY76, a cross of Traminette and Ravat 34,  in 2009, which was a cool wet year in the trial vineyard, producing grapes with lower brix and higher acidity than normal.

What I do remember clearly was that alone the NY76 had some pretty floral and herbal notes and grapefruit flavors, but when blended 50/50 with vignoles, created an intense aroma of fresh bosc pear skin that neither grape possessed on its own.  It was quite a remarkable chemical/phenolic reaction, and made for a very special angle in our first sparkling wine experiment.

With these things, the NY76 family tree provided by Carl Camper at Chateau Stripmine, and the several thousand known grape names in mind, I’ll be putting on my thinking cap, and trying to come up with some naming suggestions of my own.  Please chip in and send in your ideas, or share them in the commentary below, then we’ll compile the list and submit it.   Twitter hashtag #NY76NY95?

The other bit of news was about a game of re-name that grape for one whose nickname had stuck too long, and really needed an adult update to satisfy an audience wider than that of its original champions.  Having seen it in the vineyard I can attest to its hardiness and vigor.   I have also tasted a few “test batches” of GR 7, found them to be dark in color like many of the hybrids, light fruit flavors in the red spectrum, slight earth and herbaceous notes, with some noticeable tannin.  Based on my reading it is often employed in blends, and that definitely makes sense, given it’s productivity and reliability.

Below, I’ve included the text of the email, along with the pertinent contact information for those who would like to know more about this wine grape, and the image should link . In 2003, Cornell University released a red wine grape known as ‘GR 7’.  The name stood for “Geneva Red” as it was one of a series of red wine grapes (‘GR- 1’ to ‘GR- 8’) from the Geneva Experiment Station to be extensively tested during the 1960s and 1970s.  Since it was targeted primarily for blending wine production at the time of its release, it was simply given the official name ‘GR 7’, as it had been known until that time.

Since its release, members of the grape and wine industry have asked for a more marketable name to be applied to ‘GR 7’ because the name ‘GR 7’ causes confusion among consumers not accustomed to abbreviated names, and since even with blends, wineries often list the names of varieties used on the back of the label.  In response to the requests we’ve received, we have therefore decided to simply re-name ‘GR 7’ officially as ’Geneva Red’.  The United States Tax and Trade Bureau has already approved this name for use on wine labels.

If you have any questions about ‘Geneva Red’, please direct them to Bruce Reisch (viticultural aspects) bruce.reisch@cornell.edu, or to the Wine Analysis Lab (enology) NYSWAL@cornell.edu. If you would like to acquire a license to propagate and sell this Cornell variety, please contact Jessica Lyga JML73@cornell.edu at the Cornell Center for Technology Enterprise Commercialization.