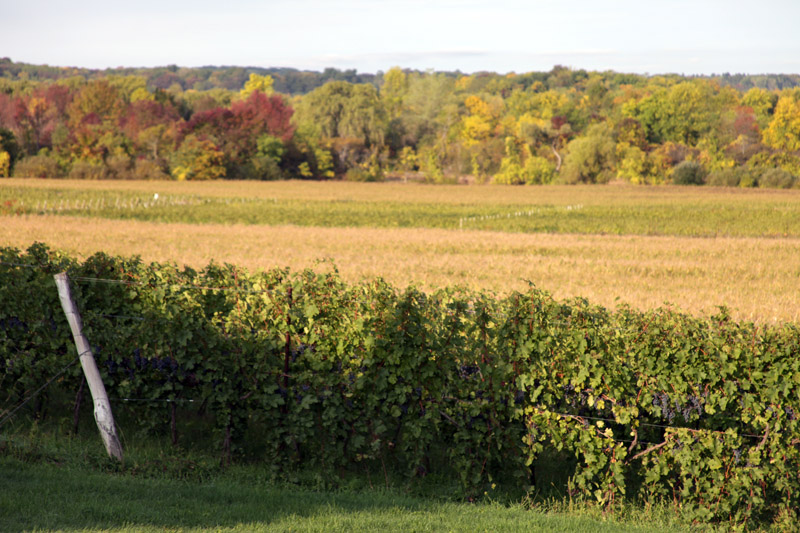 It’s the same story that plays out every year. Winemakers are forced to evaluate the complexities of a growing season in a consumer-friendly pitch meant to inflate or dampen expectations of a particular vintage.

I tend to believe the dance that Mother Nature, grower and winemaker perform every year and the expectation of resulting quality can hardly be simplified by rehashing the weather but this look back on our young region’s season will suggest the potential of the vintage.

Grower Tom Tower of Youngstown — like most everyone I spoke to this year — agreed that there was plenty of heat to ripen even the most needy red grapes although he wasn’t only keeping track of temperatures.

“By my rough calculations we only had three cloudy days in the months of June, July and August and when the sun shines everyday, everything works,” says Tower.

By late August, the sunshine produced sugars that were high enough that there wasn’t going to be any concern regarding alcohol levels. Even as total acidity (TA) sank, I was seeing pH levels remaining low. I still don’t know if that was related to water-stressed vines or not, but with varieties like pinot noir the stability that lower pHs can give are welcome as long as the flavors are there.

The rain came just in time for pinot noir harvest nudging some vineyards to pull the trigger as soon as they dried out. Some unwelcome break down was spotted in pinot this year as temps warmed back up after the rains showing once again that even in perfect growing seasons, there is no room for error in the canopy management of the heartbreak grape. There were surely be some overripe pinot noir this year due to some letting grapes hang too long but I don’t think that style is hardly ever frowned upon at the tasting bar.

A mid-October freeze signaled the end of the season for the Bordeaux varieties but there wasn’t any complaining by then because brix levels had already went above and beyond ideal levels in even the latest ripening varieties. Single varietal Cabernet Sauvignon in 2012? Yep, we’ll probably see it.

Here are a few words from the local winemaking community.

Jonathan Oakes, winemaker, Leonard Oakes Winery
I should have known at the time of our January 3rd Icewine harvest that things were just a little bit different. The only opportunity we had to process Icewine all winter long and it was done without snow cover. The mild winter conditions made for a rather tenuous way forward into spring. With temperatures exceeding 70 degrees Fahrenheit in March for close to a week and a half, vines started acclimating themselves to these spring like conditions. Fortunately grapevines aren’t as quick to leave dormancy as other fruiting crops, and the following colder temperatures didn’t break the barriers of our safety zone. With newly pruned canes and undamaged buds, we began our growing season in very early April, almost two weeks ahead of typical years. From budbreak on we were seemingly being challenged by mother-nature to keep up. Hot and dry (for us) conditions gave way explosive growth, keeping us busy with shoot and fruit thinning and canopy positioning for the next few months. Though rain was scarce it seemed to arrive right on time for the remainder of the season. Every two weeks or so we would see just enough to wet the ground and provide a bit of relief. Early signs were pointing to a slow steady harvest with a pick-by-numbers desired scenario. Unfortunately we received quite the opposite. It may have been our disbelief that we were experiencing a California summer or it may have been our inability to predict a harvest date but the resulting harvest felt reactionary.

Our crush pad began its season on August 28th roughly fifteen days in advance of previous years! With new equipment in transit to our facility, we opened up to a melee of crush, press, and process using very limited capacity tools. Chardonnay and Pinot Noir for sparkling came in with perfect numbers. Cayuga, some Vignoles and Marquette were brought. To add to the hurried pace, we found that the numbers we were tracking to be reaching their apex in unison. The crescendo moment seemed to be the arrival of Chardonnay, Pinot Noir, new crush equipment and the earliest portion of Riesling. Riesling continued for the next few weeks with Merlot, Blaufrankisch, Sauvignon Blanc and Frontenac in the mix. Chambourcin and Traminette rounded out the usual suspects before Syrah and Cabernet Sauvignon towards the end of October. With everything in a tank and working towards completion before the arrival of November, we were able to get a jump on cleaning up the vineyard. Mowing, a final spray and the netting of grapes for Icewine, were completed early.

Although the season was hurried, the resulting wines are already showing as stunning. Tannin and seed maturity for reds were the best I have seen. Brix levels were high across the board. Whites were harvested based upon chemistry AND flavor development. Those who watched their T.A. closely will be rewarded. The vines were lignified and prepped for winter almost a full month in advance. Pruning has started already in a few vineyards. The only thing left to do is guide this remarkable vintage to bottle while hoping that the winter won’t be as extreme as the summer.

Kurt Guba, cellar master, Freedom Run Winery
The year was very warm and dry and the fruit was concentrated and the sugars were just crazy high. In cooler years we might be concerned with getting appropriate sugar levels, this year we knew the sugar was going to be there and were more concerned letting the fruit hang long enough to ripen tannins and develop complexity while preserving acidity. So rather than measuring sugar every day we were testing acid and pH more often, to ensure the stability of the must and the structure of the wine. By the time we started bringing in fruit most of it had very high sugar levels which we would generally try to avoid, but the extra hang time gave the grapes great intensity of flavor and the resulting young wines all have amazingly full and ripe tannin. If you are a big fan of cool climate reds this may not be the best year for you. The wines will be not have the tart red fruits aromas, bright acidity, and delicacy you may associate with the region. These things are, as a rule, going to be big, burly and boozy.

Martin & Ann Schulze, owners Schulze Vineyards & Winery
The weather this year has been the best yet in the forty plus years we’ve been growing grapes. Thanks to our location on the southern shore of Lake Ontario, the warmer than average Spring temperatures did not push the buds. Therefore the frost that came in the late Spring brought very minimal damage to just a small percentage of the native Niagara grapes.

The dry heat of the summer not only kept disease down and made for clean crops but also gave the Reds more intense color. The brix levels in all varieties reached the highest we’ve seen in all years past. Early harvest was beneficial for the natives and also helped us extend the growing season for hybrids and vinifera. This year should produce some of our best wines and also set us up for a stellar 2013 harvest.