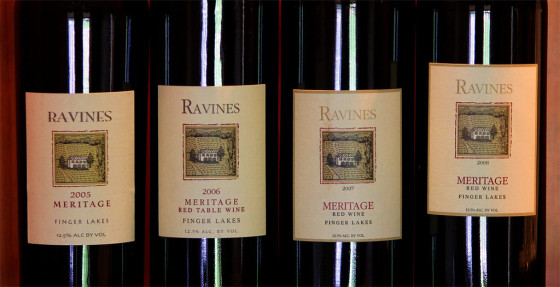 The premise of a vertical tasting is simple – samples of the same wine are drawn from different vintages and are tasted in a side-by-side fashion to compare and contrast differences in the wine that can be attributed to variation in climatic and other growing conditions across various years of production. Of course, additional factors such as changes in winemaking styles, difference in fruit sourcing, and changes in blend composition can also play a major role in the flavor profile of a wine and need to be considered when choosing the wine and vintages for a vertical tasting.

Assuming these factors can be addressed, the availability of a sufficient quantity of different vintages can also provide a significant challenge in organizing a vertical tasting (which are also sometimes referred to simply as a “vertical”).  Fortunately there are a few options when it comes to addressing this issue.

First, some wine collectors will systematically acquire a range of vintages as they are released with the intention of using them in a vertical at some point in the future. This approach requires foresight and planning, as well as substantial discipline on the part of the collector to both consistently acquire the wine as well as to resist the temptation to drink it along the way. So while this may be an approach that some collectors can follow successfully, others may consider other options.

The second possible approach is to locate and purchase a range of vintages either at a local wine shop or through an online wine site. With some luck, it may be possible to find older vintages of some wines, but the probability of finding more than the current and previous vintage falls significantly with each additional earlier vintage. For instance, with some effort I can find the 2012 and 2011 vintages of a popular, regional dry riesling, but tracking down the 2010 and 2009 vintages in order to have a four-vintage vertical would prove to be very difficult, if not impossible. Both local shops and online sites have limited amount of space and capital to invest in inventory. While it can be a good investment strategy for them to buy and hold top-end wines (e.g. first-growth Bordeaux wines), the return on investment from buying and holding multiple vintages of most wines makes that investment strategy implausible.

Fortunately, there is a third option for acquiring wines for a vertical tasting. Some wineries hold back a small quantity of their annual production to create a category of product that is referred to as “library wines.” These wines are often chosen on the basis of their popularity as well as their ability to age gracefully. Production levels and ability to meet current demand are also considered when deciding both the wines and quantities to designate as library wines.

Within the Finger Lakes, there are a small number of wineries that have formal library wine programs.  Among them is Ravines Wine Cellars in Hammondsport, NY which has one of the most comprehensive and successful library programs in the region. A recent review of their library wine list found nearly fifteen wines that span vintages from 2006 through 2011.  As an example, Ravines Meritage had an impressive run of five available vintages from 2006 through 2010. The winery’s owners, Lisa and Morten Hallgren, select wines from each vintage that they feel have the best potential for aging as library wines.  Both red and white wines are considered. In addition to meritage wines, Ravines library wines also include merlot, cabernet franc, pinot noir red wines and chardonnay and dry riesling white wines.

The cost of maintaining a library wine inventory can be considerable for a winery. Aside from the initial cost of production, the additional costs of insurance, storage and handling, and interest can make a library wine program financially infeasible. But for Ravines, library wines have been a commercial success. According to Ms.Hallgren, the customer response to the re-release of the Ravines 2006 Meritage in 2013 was overwhelming: “We routinely hold back a significant portion of our Meritage to re-release in later years. (When we) re-released the 2006 vintage last year and it flew out the door.” 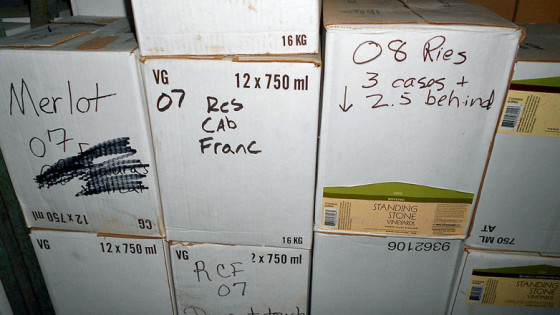 For winery owners Marti and Tom Macinski, the library wine program at Standing Stone Vineyards in Hector, NY provides an educational opportunity for both their customers as well as for themselves to discover how wines change and evolve as they age. Ms. Macinkski explained the beneficial aspects afforded by the use of library wines in tasting events that are hosted by the winery: “Vertical tastings are a great way for people to see the effects of vintage variation.  And they help to demonstrate that our wines, when well made, can age very well.  This helps to build up our reputation as serious winemakers and grape growers.”

Standing Stone has an extensive inventory of library wines that extend back nearly two decades. “We originally did it out of geekiness,” commented Ms. Macinski. “Tom was a chemical engineer by training and took an analytical approach to winemaking. He felt that saving wines from each vintage was a great way to learn about how they aged.” Today, Standing Stone routinely saves five cases of each wine from each vintage for inclusion in their ever-expanding inventory of library wines. Visitors to the Standing Stone tasting room can usually find one or two library wines that are available for tasting.  But they are more likely to find the wines in one of the six vertical tastings that are held at the winery during the year.

While the library wine programs at Ravines Wine Cellars and Standing Stone Vineyards offer library wines for customer tasting and purchase, the programs at other wineries — Anthony Road Wine Company, for example — are more internally focused. Anthony Road also holds back wines from each vintage for use as library wines. But rather than offering them for sale or on-site tasting, the winery’s library wines serve other purposes. “We hold onto library wine for our own research purposes,” said Peter Becraft, the head winemaker for Anthony Road. “We don’t sell them. (But) we pull them out for special events and for tastings with industry and media.” Mr. Becraft echoed the sentiments that were expressed by Ms. Macinski regarding the importance of library wines in establishing credibility and gaining recognition for the Finger Lakes wine region: “We need them in order to show the aging potential to the media and trade.  There are still major preconceptions about the wines from our region.  Aged wines give us a chance to show that our wines do continue to evolve.”

Library wine programs don’t typically receive much fanfare or promotion.  In fact, you may not even know that a winery has one unless you ask. Not all wine library programs feature the breadth of variety that can be found at Ravines Wine Cellars or the depth of history that Standing Stone Vineyards does. And like the wine library at Anthony Road Wine Company, some are designed for specific, internal purposes. But several other Finger Lakes wineries do have library wines even if they don’t have a formal program.  So whether you are planning a tasting event, or just want to experience a taste of the region’s past, be sure to ask about library wines the next time you hit the Finger Lakes wine trail.