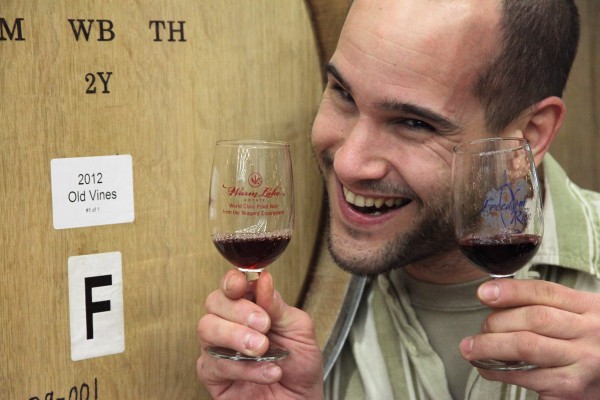 Two years ago, the owner of Freedom Run Winery bought what was once known as Warm Lake Estate, including the winery building, vineyards and much of the equipment. With the 2012 harvest,  Freedom Run saw its first harvest from those purchased vines.

I sat down with friend and part-time co-worker Kurt Guba, cellar master at Freedom Run, to get his impression on the wines to come from that site not too long ago.

Bryan Calandrelli: This was the first year Freedom Run Winery has gotten a harvest at the site of the former Warm Lake Estate Vineyard. How were the grapes this year?
Kurt Guba: We didn’t get very much considering how many acres are over there. We’re still looking to re-establish the ones we’re going to keep and get them up and running. We have to do some replanting because there was a lot of vine mortality because of a few years of neglect. The fruit we did get is pretty consistent and ripe with decent structure and acid. Thanks to it being such a warm year the grapes definitely got there (to ripeness).

BC: What do you think that site’s total output will be in the future?
KG:What you need to realize is that not all those vines will be kept as pinot noir. We’ll keep the west side of the vineyard (Quast Vineyard), which is about 15 acres so we should be able to get 38 tons if it’s managed well and cropped appropriately.

BC: How did Freedom Run divide the fermentation batches of those grapes?
KG: Well we didn’t divide them up by clonal stock because we don’t know what that is. It’s a carefully guarded secret I guess (previous manager Mike Von Heckler is currently the only person with that information). We divided them up by general soil types. We kept the newer planting (Quast Vineyard) separate and that’s the side that we are going to maintain. Across the road the first eleven rows, which made up the original planting, we kept separate. Then going further east the soils changes to Rheinbeck soil to Hilton soils and we kept those grapes together in the winery.

BC: Were the different batches handled the same way in the winery?
KG: No not at all. The east lot we did different things with. The west side lot (Quast Vineyard) — we really wanted to try the same style of winemaking as Warm Lake — so we fermented four tons in a tank that previously sat in the cellar of the former winery. This was a much larger lot than we’d normally do so it was a very hot fermentation with pump-overs everyday. The style of it ended up being very big, very dark — actually alarmingly dark for pinot noir — and very tannic. The other lots we took a more Freedom Run-style approach in the winery with smaller lots, manual punch-downs and cooler fermentations. Some of them we inoculated yeasts, some we did wild fermentations.

BC: Is there a noticeable difference in the old vines wine (first eleven rows of east side)?
KG: The fruit profile is very dark fruits. It really has a brooding quality about it so it is different than the rest of that east side which is much lighter red fruit. The difference between the oldest vines and the youngest vines are only five years so there’s not a huge difference and in the overall lifespan of a vine, how much difference does that really make? They’re just too many variables while we rehabilitate the vineyard to know if that’s making the difference.

BC: Setting aside the fact that within both Freedom Run pinot noir sites there are three different blocks, are you able to notice a difference in the wines from the generalr sites?
KG: If I had to generalize about the differences in what we’re tasting between the Warm Lake site and our estate vines around the winery, I’d describe ours to have a real wild, animal quality to the wines — a more musky, earthy quality to them. It’s tough to describe a blanket comparison between the Warm Lake site and the Freedom Run site because each individual microclimate and soil structure within have a different story to tell.

BC: What were the grapes like when you worked the harvest at Warm Lake prior to ending up at Freedom Run?
KG: In the harvests that I worked there we never saw the ripeness levels out of that vineyard that we saw this year. The overall health of the fruit coming in was really very good. We were not sorting out any rot like previous years there. That vineyard has historically had issues with black rot and I know we didn’t have any of that this year. The fruit health was far and beyond anything I’ve seen come out of that place before.