Jonathan Hull has done what many of us city dwellers only dream of: he has run off to the country to make stuff. A former insurance broker, he recently quit that job and has now immersed himself full-time in making cider and wine deep in the Hudson Valley.

Working in the same orchard planted by his grandfather (and subsequently run by his father), Jonathan oversees nearly 40 acres of apples, as well as a one-acre vineyard.  His son, Dylan, 22, has been working with him for over 15 years, and is now in charge of outside sales and meeting new accounts, most of which are in New York City where their Naked Flock line of ciders is rapidly taking off.

In most years, they also produce up to 20 different wines; with a seeming nonchalance, Jonathan follows his palate, as opposed to some idea of what he “should” be making.  When asked what kind of wines he produces, he answers, “well, yes, definitely European varietals like merlot, cab franc, and chardonnay, but also sometimes American varieties like Cayuga and Seyval, or even a blend of the two, such as a Seyval Chardonnay.”  He is a tinkerer in the truest sense of the word.

In the early 1990s, long before the current cider resurgence took off, Jonathan was living in Greenwich Village in NYC, having just graduated from college. Like all of us who are dumped from the comfy confines of academia into the harsh world of “real life” (a feeling not unlike the featherless birds that adorn the Naked Flock cider labels), he was searching for inspiration. He came across an article about a Vermont lawyer who had begun making hard apple cider (now the ubiquitous brand, Woodchuck); it was the seed that would grow and come to consume him over the next 20 years.

In 1993, he made his first cider. “It’s actually quite easy to make a simple cider,” he says, “by adding Champagne yeast and fermenting till dry.” He began deepening his relationships with the nearby apple farmers of the Hudson Valley. As his orchard is mostly made up of dessert apples (close to a dozen different varieties), he was after classic cider apple varieties like Winesaps and Ida Reds, used to add acid and tannic structure to cider. These are not easy to find. In fact, a Cornell researcher told him, “They’re out there, but they’re really apples that somebody’s great grandfather planted and no one ripped out.” 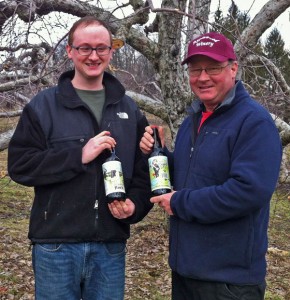 But making a simple cider is not his mission.  “No one was making a real Hudson Valley Cider. We wanted to move away from commercial styles.”

Naked Flock is unpasteurized, not mixed with water, concentrates, colorants, or any of the other ingredients often used by the big boys to produce mass amounts of cider for a nationwide market. What comes out of their massive tanks in one day would eclipse what Dylan and his father make in a year. But it is the real stuff.  “People want something local, of good quality, with a connection to the land and the people who make it.”  Their tasting room is jammed with visitors. And it is through these real-time interactions, that Naked Flock has tailored its signature style. Jonathan noticed early on, that the ciders with a touch of residual sugar were the most popular, so he pivoted in that direction.

The “Draft” cider is fermented with Belgian Trappist Ale yeasts and a touch of Organic Maple Syrup. Straw yellow in color and moderately bubbly, the cider has spice aromatics on the nose like cinnamon and curry. With a rich mid-palate from the maple syrup, one senses the residual sugar on the tip of the tongue, followed by a tannic zip across the inside of the cheeks. It has a lively acidity and a full-bodied, unctuous mouthfeel.

With three varieties of cider in distribution (Draft, Original, and Pumpkin), New York City is fast becoming their biggest market.  It only makes sense. The world moves in cyclical ways, and one can only imagine there is a young insurance broker in Greenwich Village who is cracking open his Aladdin’s bottle of inspiration right now. His move to the country will come; it just might take 20 years to get there.