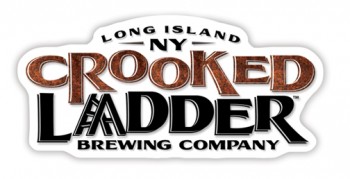 Four years ago, brothers Steven and David Wirth, along with friend and brewer, Duffy Griffiths, got the idea to open a brewery.  After years of toiling with town codes and renovating their space, 15 new fermenters are finally ready to be filled with the trios’ first batch of Crooked Ladder Brewing Company beer.

Located on Main Street in downtown Riverhead, the brewery aims to start brewing by the end of May with an opening slated for mid-June. With summer just around the corner, there’s no better time for all the plans to finally fall into place the new brewery.

Steven Wirth owns Digger Odell’s restaurant, adjacent to the new brewhouse. His brother David owns a private contracting business that is responsible for the construction of the interior of the brewhouse. Duffy Griffiths, brewer, owns two delis, both bearing his name “Duffy’s.” The partners’ different paths in life converge from varied backgrounds and experience, (inspiring?) spurring the name “Crooked Ladder”. 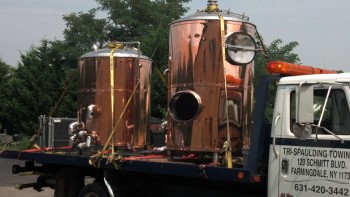 When I visited, I was initially impressed with the scale of brewing to be performed in the relatively small space. The team recently installed seven brand new conditioning tanks, and acquired two beautiful copper fermenters from a brewery in Pennsylvania. Crooked Ladder’s system will allow them to produce around 5,000 barrels a year.  There are two on-site cold storage facilities with the idea of expansion on the Wirth’s minds.  David Wirth, upon being asked if he was excited to open after years of planning responded honestly that “I’m already thinking of growing outward from our space here.”  They are looking at a storage facility in Riverhead that was ironically once the distribution point for Schlitz Brewery in their heyday.  Although he wants the company to grow “slowly and organically,” David admits that they may have already outgrown their space on Main Street before a batch has even been brewed.

According to the brothers, the atmosphere of the retail location will hopefully attract a more “suit and tie” clientele. Their retail storefront is replete with appealing décor including a beautiful soft wood paneling (composed of beams reclaimed from an Oregon-based mushroom farm) and elegant dim lighting.  The feel of their tasting room/brewing facility will be a comfortable hangout, setting it apart from the typical cellar-type environment.  Food may be brought in from Steven’s neighboring restaurant because it “just makes sense.”  This symbiotic relationship is complete with a 16-tap system recently installed at the bar. Diggers will pour the entire Crooked Ladder lineup of beers, with the remaining taps dedicated to other local craft brews.

As there was not anything available to taste yet, I asked Steven about what would be their house-style or flagship ale.  He explained that he doesn’t want to pigeon-hole the brewery with a flagship beer just yet, and stated how the brewer will explore all styles of brewing — from English to Belgian to West Coast style IPAs. 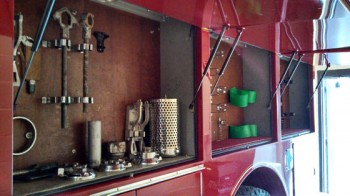 The Wirth’s talked with me about a lot of interesting ideas for branching out, like a summertime “beer garden” behind the brewhouse (Riverhead town permitting). One of the coolest concepts they spoke of was a roving beer truck aptly named “The Growler.”  A fire truck used by the town of Jamesport in the 1970s, has been re-commissioned to deliver beer for special events as well as private parties.  There will be hatches that open up to a refrigerated tap system, making it the most badass beer truck around.  The only adjective that came to mind when I saw it was “awesome.”

During the half hour I spent with them, the Wirth’s focus on the future of the brewery quickly convinced me they’ll be successful. Their spare-no-expense philosophy and execution will make this pretty little brewery a favorite hangout for people in the area and beyond. It left me thirsty for Crooked Ladder Brewing Company’s beer before a single drop has hit the bottom of a pint-glass.