After a hot summer bike ride, nothing tastes better than a good root beer float. But why not substitute sarsaparilla for stout? I like my floats with all sorts of malty, sweeter beers, and after a morning bike ride over the weekend my boyfriend and I hit on what might be the world’s greatest beer float.

Unlike many brews by the Stout Kings of New York, Creme Brulee doesn’t have any chocolate flavor –– instead, it’s bursting with vanilla bean and caramel flavors thanks to real vanilla bean and dark caramel malt in the recipe. At 9.6% ABV, it packs a whallop, so unless it’s been aged (I enjoyed a wonderful cellared example from 2008 at an Old Toad visit last year) I prefer to serve it with food. Or as food. 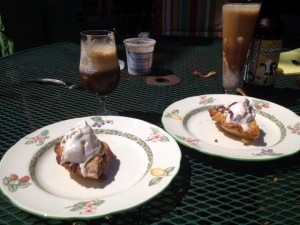 Sweet Jenny’s is a Western New York favorite, and now that their wonderful and diverse flavors are available in pints it’s ideal float material. (If you leave any ice cream in the carton, you may later find yourself dumping beer into it and eating the mixture with a spoon. Not saying I’ve done this… speaking for a friend.) This flavor has huge hunks of delicious cherry and flecks of vanilla bean, for a perfect Creme Brulee Stout pairing.

Hey, you know what, it was breakfast time. And before breakfast, we biked 8 miles to one of our farmer’s markets and back, and on the way we acquired a homemade cherry pie just big enough for two. (Probably four.)

Cut pie. Add ice cream. When the float is almost entirely consumed, dump the dregs on top of pie.