If you didn’t read my introduction to the New York Cork Report it might be worth reading before continuing with this article. For those that don’t have the time — hello, my name is Will, and I sell New York wine in the UK. Right, let’s get started….

It’s been nearly ten months since our latest shipment of wine from Long Island and the Finger Lakes docked in Thamesport. 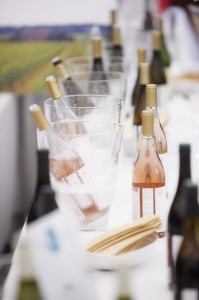 On the back of the London International Wine Fair plus some great press in Harper’s, the Drinks Business and Meininger’s Wine Business International, New York wine definitely has not gone unnoticed. Key young sommeliers and writers have helped spearhead the spread of our wine both in the on-trade and consumer sectors. In the fall, once the trade had woken up from its deep summer slumber, things increased exponentially.  The wine and restaurant trade is a sociable, close-knit circle and as more sommeliers spread the word about New York wine, we saw more and more listing the wines, looking for something exciting and new.

What has been made clear over these last months is that the wine can, in general, stand up for itself. With 80% of our wine made in fewer than 800 cases and the vast majority hand-picked, these are boutique, premium wines, with fairly high production costs.

As a relatively new region for the UK market, these prices could have put sommeliers off, but once they’ve gotten past the initial ‘Wine from New York? Really?’  barrier and taste the wine, they are taken aback at what New York has to offer. This initial question or doubt is something I’ve heard from former New York residents as well; perhaps this tells us that more needs to be done on the domestic front as well as export markets.

There is, however, something to be said that over half of our on-trade (restaurants, bars) clients being Michelin starred establishments, and the prices people are willing to pay to eat at them. With wines generally being listed at three times the price they were bought for, even the cheaper wines are often too expensive for lower-end and chain restaurants.

Let me explain, rather long-windedly, with some added statistics for good measure:

It’s now worth looking at how a £10 bottle of wine is made up:

I can tell you, we certainly don’t buy wine from New York at that price, even if they were magically already on UK shores, but neither am I saying we should be, but it is important to see what we are up against, and to understand the market.

When following the standard margins, the cheapest New York wine we have would be on independent shelves for around £17, and whereas we can sell direct to consumers, and do, without them we do not have the same reach.

Supermarkets have very little on their shelves above £10 have an 81% share of the market.

Independent wine merchants on the other hand are likely to have nothing under £7, but only have a 3% market share.

Where price isn’t an issue, the wine is doing well. Where price is an issue, often the wine is compared to similar varietals or styles from other more-established regions, with lower production costs. This will change as demand grows, and in fact we’ve just had our first order from a very high-profile and prestigious department store. As awareness and demand for New York wine grows, there will be less need for a ‘hand sell’ and stockists will be less worried about turnover of their New York stock.

One thing, although superficial, that could help the wine more befit its price tag, would be in some cases to modernize labeling and packaging design in line with other wines that would retail at the same price.

We’ve had around 80 wines in our portfolio for this past year, which has allowed us to see what prices and styles the market will take. The palate of the British consumer is different than the American, and what might sell out in the United States might not over here. Our definition of what a wine labelled dry should taste like is certainly different.

One of our favorite quotes from a sommelier at a two Michelin Star client in regards to New York wine, is that the wines are “A bridge between the old and the new world.” Another great aspect of New York wine is that unlike many wines regions, especially European ones who are bound by laws, legislation and some climactic factors, we see some unusual blends. Our top selling wine is a chardonnay-riesling blend from the Finger Lakes and some more unusual blends from Channing Daughters Winery are really catching sommeliers attention.

We are now approaching this year’s London International Wine Fair with a much clearer view of the wines that can take New York forward and capture the attention of the whole UK trade. We will be tasting new vintages, new blends and even some new producers, with a much clearer picture of what will work and what won’t.

With this article I wanted to present you with an overview of the UK market and some information the progress of New York wine in the UK. Over the coming months and hopefully years, I’ll be able to provide more details. I’ll be reading all your comments and will try to respond to them all.