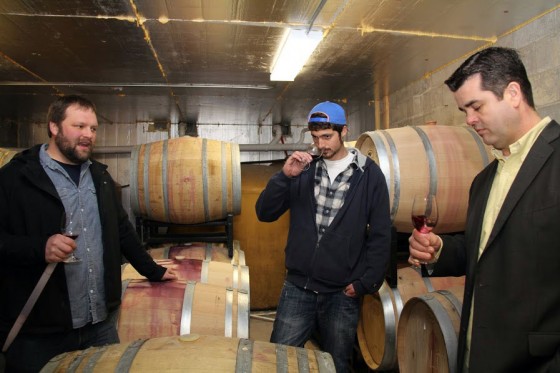 Editor’s Note: This is a guest post by Lindsay Prichard, an avid NYCR reader who wanted to share his passion for Finger Lakes wines with other readers.

The long, cold weeks of winter provide a well-deserved rest between the frenzy of the previous autumn’s harvest and the bustle of the upcoming spring and summer. In the vineyards, snow blankets the ground and the vines hang silent and bare. In the wineries, the long hours of the previous harvest are over.

Winter is a time for the region to catch its collective breath before the vineyards burst back to life and the migrating multitudes of visitors return. The weather of the last two weeks reminds all of us about how quickly the work returns.

But at Villa Bellangelo winery on the western shores of Seneca Lake, the peace and tranquility of winter were replaced by a buzz of activity. For the Missick family, winter was a time for continuing the ambitious transformation of the winery that they purchased in 2011. Over the past few months, the winery has undergone a number of changes in both the visitor center building and their winemaking operations.

If you haven’t been to Bellangelo in several years, you won’t recognize it, and the Missicks prefer it that way. This is the very deﬁnition of a fresh start.

Before anything else, the Missicks are focused on the wines. They’ve hired the highly respected Ian Barry to lead the winemaking effort. They also want to establish Bellangelo as a unique wine experience destination.

Recent changes to the Villa Bellangelo property include the expansion of the visitor parking area and the addition of a new ramp to provide handicap access to the visitor center building. A new patio was also added to the rear of the building where visitors will be able to enjoy a postcard view of Seneca Lake. Future plans for the property include a new entrance to the winery from Route 14 and the addition of new plantings in the historic “1866 vineyard” that can be seen from the driveway entrance.

The Missicks are also looking into longer-term plans for the property including the potential creation of an estate vineyard and the possible addition of guest cottages that would overlook Seneca Lake.

Inside the winery, a large, new customer experience room is under construction. According to Chris Missick, the new room will be used as a tasting area for large groups of visitors as well as for corporate outings. The room will include ﬂat screen displays and other features that will be used not only for tastings but also for wine education, a central theme of the winery. “At times, the winery feels like an educational institution,” said Missick. “We want every customer to have the very best experience possible when they are here. We want them to feel at home and get a sense of history.”

The history angle might seem cliche if it weren’t so sincere. Missick himself is a student of the history of winemaking in the Finger Lakes and he recently wrote a book titled “Sense of Place.” The book details the area’s rich history from the late eighteenth century to today. In the book, Missick also delves into the concept of “terrior”, the French term that has been used to describe an area’s unique characteristics that contribute to the wine the area produces. The concept, which he describes as “a sense of place”, is one of Villa Bellangelo’s main educational themes.

You might give Missick more room than most when it comes to understanding French ideas. His wife was born in the south of France.

There are a number of changes that have taken place at Villa Bellangelo that are less visible to most visitors. Head winemaker Ian Barry has overseen the substantial expansion of the winery’s production capabilities. Villa Bellangelo’s cellar boasts an impressive array of new stainless tanks that were manufactured by Vance Metal Fabrication in Geneva, NY. A new stemmer and press were also added to help meet increased production goals for 2013. Almost every aspect of the wine production process either has or will be undergoing change. This is not a cheap transformation.

The Missicks believe it will be worth it.

In addition to the numerous changes that have taken place in the winery’s production facility, other important changes have simultaneously been taking place in Villa Bellangelo’s cellar. Barry and his team have been working with the Missick family to expand the varieties and styles of the wines that Villa Bellangelo produces. Barry, who’s basic winemaking philosophy is to “allow the vintage to dictate the style of wine we make”, has been working on several new wines while ensuring that traditional favorites such as their award-winning Moscato continue to meet the high quality standards that the wines’ followers have come to expect. According to Missick, the mission at Villa Bellangelo is clear: “We take winemaking seriously. Our number one job is to make the best wines possible.”

Among the new wines that Barry has been working on are: 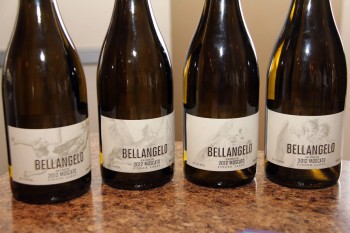 On a recent trip to Europe, Missick found a lesson in the wines he wanted to drink. “I was in France visiting my wife’s family and had several bold reds while I was there. Although they were very good wines, I actually longed from something from the Finger Lakes. As soon as I got home, the ﬁrst wine I had was a cabernet franc — from a Seneca Lake winery.”

In the Finger Lakes, winter has emphatically given way to spring. The region’s vineyards are springing back to life and the wineries are beginning to swell once again with tourists. On Seneca Lake, the Missick family and their team are continuing the work of transformation of their new winery. They are aiming as high as they can, promising to give Villa Bellangelo its own unique “sense of place.”