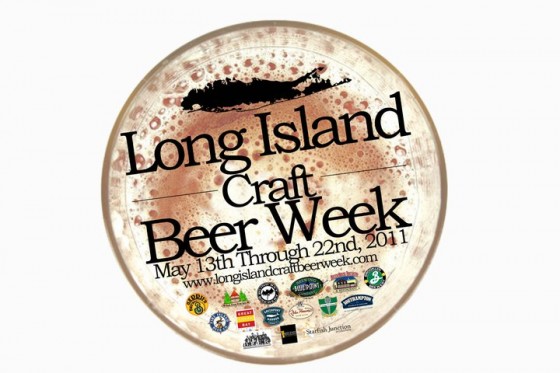 The Third Annual Long Island Craft Beer Week is actually 10 days if you count the pregame, and I don’t  mind that at all. From May 10 through the 19 expect to see plenty of alehouses and beer-centric watering holes promoting and pouring Long Island craft brew.

The festivities begin May 9 with a free pint glass pickup happening at multiple locations (register here for yours) and a pre-game Cask Kickoff tasting at Croxley’s Ale House.  One of the larger kickoff events will be “Bayfest 2013” held outside of Great South Bay Brewery. GSB will play host to more than 20 New York State breweries offering tastings and food from 1 p.m.-5 p.m.

I’m a confessed foodie, and have been eyeing menus online that beckon to the epicurean beer lover in me.  North Fork Tasting Room is a relative newcomer to the local tasting room scene. It borders North Fork wine country, and boasts an all-New York beverage list.  They pour a solid lineup of local beer and wine, alongside small plates prepared by Lobster Roll North. On the evening of May 10 NFTR has put together a four-course tapas menu paired with Long Ireland Beer Company’s beer (at a reasonable $35).

The high-end Roots Bistro Gourmand of Islip is hosting Colorado-based craft kings Avery Brewing on May 15 for a four-course beer dinner in a white tablecloth setting.  Three days later, Brickhouse Brewery & Restaurant of Patchogue will create four dishes using their own beer, including a Coffee Porter Ribeye.

If you’re looking to get a little rowdy (and learn if ping-pong balls float in IPA), check out The Long Island Craft Beer Pong Tournament on May 15 at Jackson’s Restaurant.  And since hipsters like beer too, the LI Beer Bus is picking people in multiple locations on Long Island and bringing them to Williamsburg, Brooklyn.  The day-trip on the 19 includes a visit to Brooklyn Brewery and a few other great bars for $45.  Be grateful that the return trip is included.

Check out the official Long Island Craft Beer Week website or Facebook page for a full list of events. Multiple Tap Takeovers/meet-the-brewer events are happening nightly.  My head already hurts thinking about how much craft beer will be consumed next week.  Support your local brewer, but mostly, enjoy their beer.