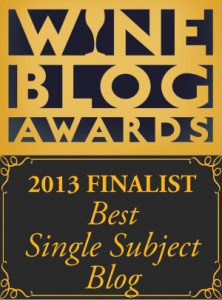 Earlier this morning, this website was named as a finalist in the 2013 Wine Blog Awards in the “Best Single-Subject Blog” category.

After taking a year off from the awards last year — so Evan and I could serve as judges without any conflict — we’re thrilled and proud to be back in the running. If we win, it will be our 4th such award.

Voting runs now through Friday and there are some great blogs represented across the categories, including many run by people that I’m lucky to count as friends.

If you enjoy NYCR and find us worthy, I hope you’ll consider voting for us.