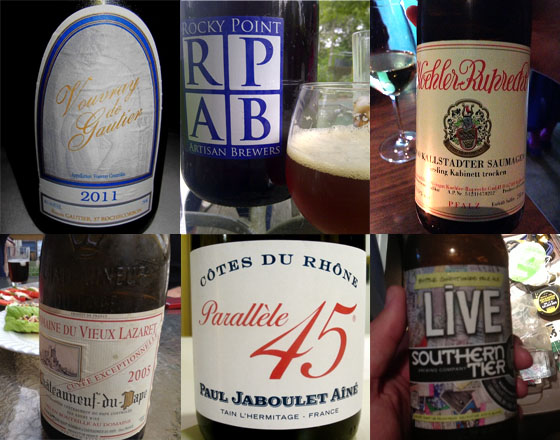 After a long hiatus, WWD is back. As always this is just a sampling of what our editors and contributors were drinking last week…

Evan Dawson: Domaine du Vieux Lazaret 2005 Chateauneuf-du-Pape
What a nice surprise it is when a wine that has previously sucked turns out to be good. And what a nice reminder that wine can change, and bottles can vary, and we ought to be very careful about final pronouncements based on one bottle of one wine.

In this case, there is nothing special about the producer. Relatively modern approach. I first drank this wine two years ago, and it was a hot, boozy mess. Like stewed fruit soaked in alcohol. Really awful.
So what happened? I have no clue, but that first bottle bore no relation to this one — and this was a magnum. This bottle was everything a modern CdP lover pursues: richness, size, texture, and dark fruits freshened with spice and herbs. I have to credit the vintage, given that 2005 was a classic. I’ll recall this bottle often when I want to give up on a wine that is showing poorly or timidly.

Len Dest: Benoit Gautier 2011 Vouvray de Gautier, Rochecorbon, France
I was first introduced to the chenin blanc grape variety when traveling in the Loire Valley while in my twenties and began drinking Vouvrays (along with Chinons). Perhaps I developed a flavor imprint then by which I have judged all chenin blanc wines that I have had since. I have never understood the reason that chenin blanc has not become more popular. Perhaps because there are many poorly made wines available in the

US market. By example, while I had some very nice ones in Paarl and Stellenbosch in South Africa, none of the chenin blanc wines exported to the US have seemed as great.

In recent years only the critically acclaimed Paumanok Chenin Blanc of Kareem Massoud from the North Fork in great vintage years has matched my Vouvray chenin blanc benchmark flavor and taste profile.

Domaine Gautier is located in Vouvray within the Touraine region of the Loire Valley in Northwest France. Benoit Gautier took over winemaking in 1981, thereby continuing seven generations engaged in the family business. The Gautier estate consists of 29 acres in the communes of Rochecorbon and Parcay- Meslay. The average age of the vines is 25 years old.

The excellent 2011 Vouvray de Gautier is made of 100% chenin blanc variety fermented and aged in temperature controlled stainless steel tanks. The wine is a very light straw color, with rich aromas of ripe pears, apricots and yellow peaches. The flavors are very similar to the aromas that of ripe stone fruits, with a very slight sweet citrus flavor. But the slight sweetness, typical of my flavor profile of a great chenin blanc wine, is perfectly balanced with acidity that makes the overall flavor of both crispness and roundness.

A great Summer sipping wine and a wonderful white wine to pair with poultry, flavorful seafood and light meats (pork and veal).

Rocky Point Artisan Brewers, licensed over a year now, have turned out some delicious brews. Some of my favorites include their Hefeweizen, Pilsner, Calypso Saison and their hard-to-come by Tripel. But this seasonal brew is one that I hope sticks around in the future and would not mind seeing in a can.

Cimarron (42 IBU, 6.7% ABV) is named after the reddish river that runs through central Oklahoma, and this western Red Ale is their answer to those that request an IPA or a hoppy pale ale. Their own creation that carries delicious malty bread-y notes and flowery citrus-y hop notes.

My wife and I enjoyed a few pints of this at DEKS a few weeks back and I was very happy to see this on the growler list at Thrifty. The Cimarron season is well over. When the kegs are gone, they will be gone…until next season.

Scoring a table at this 28-seat restaurant is hot and the food is hotter. I went immediately for the driest option (as I’m apt to do without passing go or collecting $200).

Praising the Germans and their winemaking, we lapped at the cooling liquid to welcome its austere minerality and acid one-two punch. A corsage of dried flowers on the nose. Rocky Slate. Peach Pit. (The fruit, not the diner on 90210.) A strong lime zest and a herbaceousness that paired fabulously with the dishes heavy on the mint, cilantro, and basil. Velvet on the tongue. Put out the five-alarm fire.

Kevin Welch: Paul Jaboulet Parallele 45 2007 Cotes du Rhone
This past week started with my wife and I in South Florida indulging in some fantastic culinary adventures and specifically the best Cuban-style Mojo pork I have ever had.  There truly is something to be said about cooking a pig in Miami back yard for hours on end.

Once we returned to New York and resumed our nightly routine I was in search of a wine to follow suit.

If you are not familiar with Paul Jaboulet Parallele 45 Cotes du Rhone you are missing out on a great weeknight value. I came across the 2007 a couple years ago on the recommendation of a local merchant and friend. A stronger vintage in Cotes du Rhone, 2007 started with a warm spring and early buds and lasted through late September.

Parallele 45 is a blend of Grenache and Syrah and tastes of bright cherry and strawberry and although aged in stainless steel is still able to offer a subtle complexity with hints of pepper and a pleasant light smokiness.  This is a wine meant to be enjoyed young.

Lenn Thompson: Southern Tier Brewing Company “Live”
I like hoppy beers. I’m not sure when this preference emerged really, but if I’m drinking beer, more often than not, it’s an IPA or other hoppy brew. That said, after a couple, I have to move onto something else (often with my tastebuds fried). I’m always on the look out for beers that will satiate my hunger for hops while also being refreshing and light enough to drink a six pack while I’m working in the yard or — as yesterday — cleaning the basement.

Enter Southern Tier’s “Live” a bottled-conditioned American Pale Ale. At 5.5% abv and with a body much lighter than most of the beers I enjoy most — while showing plenty of citrusy and pine-y hops — this is exactly the type of beer that I need in my life. Between this, Founder’s All Day IPA and 21st Ammendment’s Bitter American, I should be all set for the summer chores.