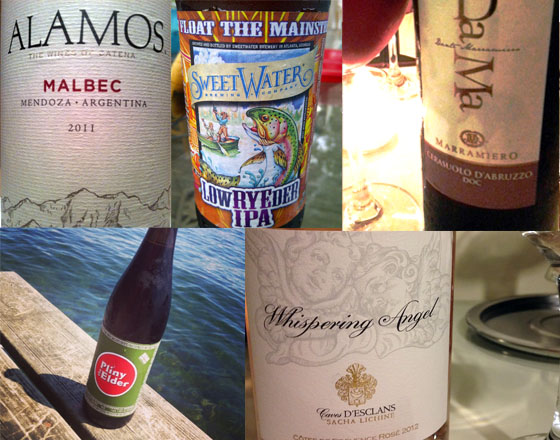 I’m willing to bet that quite a few folks recognize this wine, and may have enjoyed it themselves on occasion. It was one of those evenings where we needed something tasty but not challenging, would be pleasant with leftovers, and would help pull down the average on the weekly wine budget. It met these needs admirably, with a quality that is above average.

Ripe, lush, plum fruit, good freshness, and not brimmingly alcoholic. A $10 Malbec today that harkens to the bygone era when the $10 malbec first appeared here in the U.S. and began to wow us — before the wave of less reliable wines crashed over us. Of course, this particular wine was one of those labels in the early vanguard, so we best not forget it’s fine heritage. They may make a lot of it, but they use hand crafting methods, on fruit from high-altitude vineyards, half of which are estate held, and the other half under close contract.

This entry-level wine is an offspring of the Catena family, who are legend in the modernization of the Argentine wine industry, after a coupling in the late 1980s with the well-respected winemaker (and upstate New York native) Paul Hobbs…it’s got good bones from a solid family, and is real attractive like it’s dad.

I was feeling like an underachiever, picking such an everyday wine for this bit. There is the connection that the La Crosse that Lenn liked last was probably in a recycled Alamos bottle, as one of our crush club members had cleaned and donated a couple of cases of the empties. Then this morning I saw the news reports, that the New Hampshire State Liquor store had its best sales year ever in fiscal 2013, our local West Lebanon Store #60 was the 9th highest performing outlet in the state, and the Alamos Malbec was the best selling wine overall. I guess my neighbors and I had a little something to do with that.

Michael Gorton: Sweet Water Brewing Company LowRYEder IPA
On a recent trip to Atlanta to visit my wife’s sister’s family in Smyrna, GA, I was turned onto an incredible craft beer culture that is far superior than I have seen anywhere.

Within a 10-mile radius there were at least a half dozen craft beer joints where you could get your growler filled from 50 different taps or pick up a bomber of something from someplace I had never had a chance to get my hands on, but only read about — places like Hop City and Stout Brothers and Smyrna World of Beers were an orgasmic experience for a craft beer geek like me.

When the family was heading up this way for a visit I quickly got them a list of things I wanted. It was much more like needed. The first beer on the list was anything from SweetWater Brewing Company in Atlanta, GA.

The SweetWater is the biggest Craft Brewer in Georgia with over 100,000 barrels produced in 2012 and they are the 24th largest craft brewer in the US. There are some big names coming out of Georgia and I tasted a bunch while I was down there in earlier this year, however, the beers that SweetWater made and I tasted were some of the best by far.

I love rye beers.  I love the spice and often times bready notes that come from the beer.  I’m not talking rye bread with caraway seeds either. Stick your nose into a loaf of seedless Jewish rye bread and just eat the crust. That’s the profile I am talking about.

In a beer, especially an IPA with citrus and piney notes, when done correctly, you could hit a home run. And they did with this beer. Delicious rye malt flavors, pepper, spice, sweet malt, orange and pine. Crisp and refreshing, not to heavy on a summer day either.  There is 25% rye malt in this and thanks to the good amount of hops it keeps you coming back for more.

I have another 6 pack of these and will not get my hands on to them till Christmas. If you’re over at our house, I will share a bottle with you.

Dante Marramiero developed a winery during the 1990’s in the Italian Abruzzo wine region on the estate where his family has planted vineyards with vines dating back to the 19th century. Now, his son Enrico continues the family tradition of winemaking as Azienda Marramiero. The winery integrates modern technologies with classical winemaking processes in order to make a portfolio of exceptional wines. The Marramiero red wines are distributed worldwide and include Dante Marramiero, Inferi and Incanto, with the white winesbeing Anima, Altare and Punta Di Colle. The sparkling wines are Marramiero Brut and Marramiero Rosé: “Metodo Classico.” In addition, Marramiero also produces Acquavite di Vinaccia Dante Marramiero and Extra-Virgin Olive Oil Marramiero.

This rosato is rather unique with a rich cherry color which makes it look like cranberry juice and intriguing fragrant aromas. Unlike many rosé and rosato wines, this wine does not have ripe berry flavors, but rather more complex flavors of dried fruits, herbs and licorice, very much like a Montepulciano red wine.

As such this a a nice sipping wine and also matches hearty dishes such as favorable pasta dishes with red sauces, stews, cheeses and cured meats.

Mark Grimaldi: Russian River Brewing Company Pliney the Elder
I recently got to drink a couple bottles of one of the hardest domestic beers to come by (unless you live in or are visiting northern California). It’s not distributed, nor shipped, nor sold online anywhere.

It’s the west coast’s “Heady Topper.” It’s a beer that gets all types of praise. It’s been called “perfect” by the Beer Advocate and awarded 100 points — and unlike most 100-point wines, this one is totally drinkable.

Lots of those wines were blown out, high-alcohol Bordeauxs and Chateauneufs that Parker got all excited about. Alcoholic, over-extracted bombs. But this imperial IPA is all about balance. It smells like delicious fresh hops (and not all grapefruit-y). It’s 8% alcohol and you’d never know it.  it is impeccably balanced. It’s not syrupy or cloying and it’s not very sweet. The hops are prominent, but it’s not bitter. It is basically one of the classiest and refined IPAs I have ever had. It’s cost? a whopping $8 for a 22oz.

Clearly, it’s score does not dictate it’s price like some wines.

This is like the Cru Beaujolais of the beer world. You don’t have to spend a lot of money to drink really, really well. The only problem is finding it.

Kevin Welch: Chateau d’Esclans 2012 Whispering Angel Rosé
Last Friday, after a long day in the office, I found myself trying to escape the grind in the aisles of a local wine shop. Although I was there on a specific mission — to stock up on a particular sauvignon blanc my wife has come to love — I saved that task for last and first embarked on a summer wine scavenger hunt.

I traveled the world in a matter of minutes making stops in France, Spain and Italy with some rosé, rosado and rosato all finding their way into my cart. Then as I usually do, I made my way to New York. Although I much prefer to buy my New York wine right at the wineries I visit, sometimes convenience prevails or I’ll strike it rich with a wine on the shelf that I know is sold out at the winery.

Later that evening after adequate time to chill I opened the first of the lot, a 2012 Chateau d’Esclans Whispering Angel Rosé. Pale Bermuda pink in color the nose was equally light with subtle hints of strawberry and cherry.This Grenache-dominant wine delivered some delicate dry complexity with more cherry, peach and honey and a long crème like finish. Good balance between floral and fruit this wine could possibly have benefited from a bit more acid, but none the less a great versatile summer sipper.