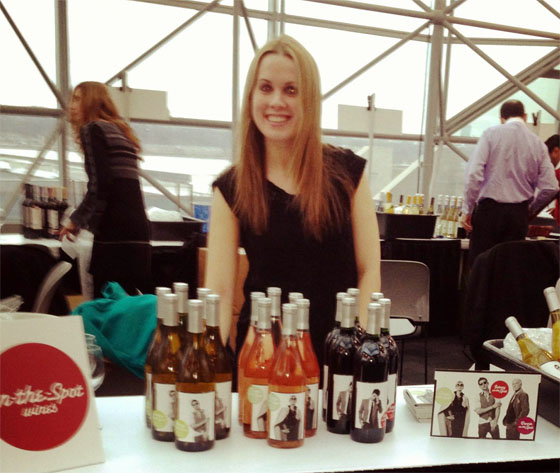 Cassie Hitchner, proprietor of On-the-Spot Wines, spent her undergraduate years in Ithaca, New York at Cornell University and that is where she fell in love with wine.

“The Finger Lakes wine country presented me with the many facets of the wine industry that make a great glass of wine,” she said in an email.

Cassie graduated in 2009 and moved to Manhattan to pursue a career in consumer public relations, but after three years she decided to “switch things up.”  Moving away from publicizing other peoples’ projects, she followed her own passion for wine and started promoting a wine region she “truly believes in.”

That was the motivation behind the creation of On-The-Spot Wines, a wine brand that she says aims to popularize Finger Lakes wines through modern packaging and affordable pricing.

What was the first bottle of wine you remember drinking — and where did you have it and who were you with?
The first bottle of wine I can vividly remember drinking was Dr. Konstantin Frank Dry Riesling. I was out to dinner with some college roommates at a Thai restaurant, and it really stood up and enhanced the spicy curries we were sharing. It was a far cry from the Franzia and other cheap wines popular with many college students. It definitely seemed fitting that my first bottle came from one of the most well-known vineyards in the area. At that time, I had very little knowledge of upstate wines and remember being impressed by the quality.

When did you know that you wanted to be in the wine industry?
Although I worked in public relations immediately following college graduation, I was always inspired by my older brother who owns an Italian wine bar and an international wine store in the East Village. On many occasions, I would stop by the wine bar after work and sit in on his meetings with wine reps and taste wines from around the world. It was a stark contrast from my corporate job, and I wanted in! I began brainstorming how I could use my wine knowledge paired with my marketing and PR experience to create a lasting brand in the city.

What do you wish were different about the New York wine community and industry?
The one major change I would love to see in the community is an increased awareness of local wines. Given the growing interest in local beer, food, and most recently, spirits, it has always shocked me that so many wine consumers often overlook or discount the quality of the wines coming from our own backyard.

This lack of awareness is exactly what drove me to create my wine brand. I wanted New York wines to pop out on retail shelves amidst more well-known wines from California, Oregon, France, Italy, etc. I also wanted the price point to be affordable enough that consumers would be willing to take a chance on local wines, and have that epiphany of ‘wow, these wines really are good!‘

When you’re not drinking your own wines, what are you drinking?
Having learned a great deal about Italian wines at In Vino (my brother’s wine bar), I find myself often returning to some of Italy’s powerful red wines like Aglianico, Refosco, Amarone, Barolo, Barbaresco, etc. That said, I do love having a nice dry rosé in the warmer months.

If you could only pick one grape/wine/producer to live out your days with on a deserted island, what would it be?
It’s hard to pick one wine or one producer, but one grape is pretty easy: pinot noir. Considering all the different styles it can produce, I don’t think I could ever tire of it. I tend to favor the cooler-climate pinot noirs, but Central Coast pinots really pack a punch when it’s overcast on this deserted island! They are also such versatile and outstanding food wines. It’s no wonder that such a fickle grape gets so much attention from both winemakers and wine drinkers.