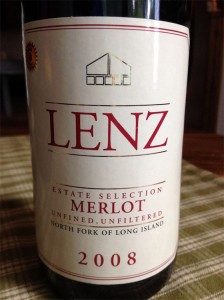 Lenz Winery and winemaker Eric Fry have earned their reputation on the backs of old-school, Old World-styled wines made on the North Fork of Long Island. What isn’t discussed nearly enough, however, is the value their wines deliver.

In a region where winery prices have escalated significantly over the past five years, the prices for Lenz wines have remained near-constant. The most expensive red, their Old Vines Merlot, is $55 and their most expensive white, their Old Vines Chardonnay, is $25. At those prices, those wines are typically good local values, but perhaps the best value — consistently, vintage after vintages — is their Estate Selection Merlot.

Fry doesn’t make the ES bottling every year (they make the Old Vines label even less often) but the current release, Lenz Winery 2008 Estate Selection Merlot ($24) over-delivers for the price, even if it’s not quite as good as other recent vintages. 2008 wasn’t a great year for reds, generally.

A recent string of warmer vintages, along with some choices made in the cellar, have resulted in some Long Island reds seemingly looking west to California for inspiration rather than east to Europe. Not so with this wine, which favors complexity and non-fruit character over pure, unadulterated fruitiness.

The nose bring red cherries, but also leather, loamy earth and mushrooms. With time in the glass, the fruit blooms a bit, but is still supported by earthy aromas.

Medium bodied with softly gripping tannins still-fresh acidity, the palate is plummy with red cherries, spice and savory, earthy notes. There is a bit of obvious oak on the mid-palate, but it’s well integrated into the wine. Cherry pit and loam mark the end of a medium-length finish.