Editor’s Note: Thank you to Jim Silver for the first story in our new “Moved by a New York Wine” series. If a New York wine has moved you, let us know. 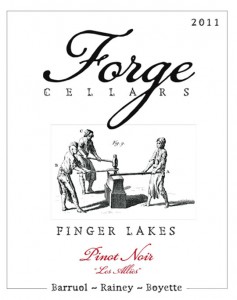 I discovered my love of Burgundy on a class trip through the Cote d’Or, sometime back in 1988. Attending classes at La Varenne and day-tripping with the other kids over to Dijon, Chablis and St. Bris surely put the rare flavors of a very old part of France in front of my brain, where they remain to this day. The unmistakable character captured by the chardonnay and the pinot noir grown on those slopes is a delicacy indeed and easily misinterpreted. Chardonnay is pale and stony, rarely if ever the sundrenched California version of it, and much more reflective of the gray skies above Beaune. The pinot noir is blood from a vein of antiquity and terroir. It is terroir, where terroir was discovered of course. That you should ever read on any bland back label of a wine from anywhere else in the world that it is “Burgundian” in style is mostly ridiculous. At the lower end of the price scale these days, even Burgundies aren’t “Burgundian” in style any more.

Wines of quality and substance can be found almost anywhere, and superlative descriptors will be written about them, but I was unreservedly startled by Forge Cellars “Les Alliés” Pinot Noir 2011 from the Finger Lakes. What put me back on my heels was this particular wine’s integrity.  It so honestly captures the essence of pinot noir I could hardly breathe — and its translation of the terroir (as only a pinot delivers it) is remarkable. It is both imperfect and wonderful. C’est une etude.

In my note to Forge’s Rick Rainey the other night I said it immediately reminded me of Grivot Clos Vougeot, or various older Vougeot 1er cru Les Cras’, Gaunoux Volnay and even earlier Dujac wines. Not a lot of current Cote d’Or wines are like this though — this is more of a throwback to the eighties and early nineties, except for producers like Rene LeClerc and Philippe Naddef, who seem to be digging a channel back through time.  I was delighted that he responded that the source of the grapes — a vineyard maintained by the great John Leidenfrost on the same slope as the Sawmill Creek vineyard, on the east side of Seneca Lake — is in fact rumored to be Vougeot clones planted in the early 1980s.

Feeling very satisfied (and a little smug!) with that answer, I wondered how it could be? I asked Rick a few questions about the wine, and you can tell from my questions where my thinking was:  How did you do this?  What did you do differently?  Where did the depth of character come from?

“Yields were slightly lower that year…bunch sorted with about 30% whole clusters and the rest crushed/destemmed” he said via email. “We ferment in a wooden vat and watch the temperature. No different than our other pinot. The ageing was pretty much the same as the other pinot with the press and the free run separated out and blended later after ten or so months in barrel, much of which is older.”

Well, this doesn’t tell me much of anything. But as Rick also said, “The wine is fairly traditional, no fancy tricks or machines just lots of diligence and attention.” I realized that possibly somehow pinot responds in some other way to its handlers. We all know it is considered “fickle” and allegedly “hard to grow” but perhaps it’s more like a stubborn child monarch — demanding respect, space, patience and careful treatment. I’m not a spiritual person but I can be convinced that pinot noir reflects the soul of its maker, as much as its terroir and either of these elements can be its undoing.

Why does Pinot Noir (or any wine really) grown by a thoughtful, conscientious and careful steward appear so differently than one grown right next to it by (let’s say) an economically driven, time-starved, or otherwise burdened grower? Even when both produce physiologically correct fruit, and raise them similarly, there is something else — but what?

The color of the Forge Cellars Pinot Noir “Les Alliés” 2011 is especially dark, not quite going to black. It is not shiny or polished. It appears exactly the way it tastes. It has two personalities: When first opened the nose is very dark fruity, yet surprisingly open-knit. There is brooding black cherry and plum, a touch of mineral, but mostly blood and iron. This is not at all in a nose-stinging iodine sort of way, but a fresh blood and cool breezy metal sort of way. Some forest leaves and decay, clay soil, and moss, but the fruit envelops these components. It stays spring-time warm and inviting throughout. Digging deeper we find violets and meadow flowers, orange blossoms, kirshwasser, warm bricks, and cassis.

The wine has real weight, but a softer body, and generous mouth-feel. The alcohol intrudes ever so slightly to remind you this is still a glass of wine. It is elegant and stylish, very serious, yet totally grounded. The finish is nice and repeats on those flavors, but just short enough to say It isn’t ethereal and god-like like some Grand Cru — this “Vougeot” style is a mortal, but a kingly being, and a charming one at that.

If the wine benefits from air, it is to focus and highlight the fruit, turning it more to reds than blacks, smoothing the tannins that hang on to the sides of your tongue. On that second day, the acids are more prevalent and upfront, and the deep dark earth seems hidden, but not faded. It is different enough to be two completely disparate experiences.

I said to Rick that Vougeot smells more like Burgundy than any other Burgundy in my opinion, and this Forge Cellars Pinot is more Burgundian than any other eastern U.S. wine I have ever had — and maybe western U.S. too. I feel as if Forge Cellars patiently permitted this wine to find its own way into the world without dictating unnecessary instructions to it, and refraining from imposing certain expectations upon it, as if the grapes themselves had their own experience to talk about — and it took to its freedom by developing that special complexity and depth which is entirely too rare in our region.

This article won’t have a part two, but if it did I might wonder aloud where will we find the New York winemakers with the patience and devotion to terroir of the 11th century Cistercian Monks? Who will commit to harnessing the full potential of a grape we already know has more potential than any other? And while I do enjoy upstate New York’s lemberger and cabernet franc and many other things, I have never, ever been motivated to pick up a pen and write a spontaneous paean to them like I did for this wine. Could there be any higher calling than pinot noir?