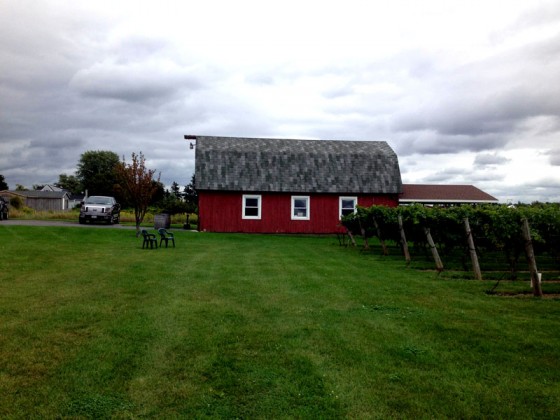 Passion. Love. Family. Friends. Lifestyle. These five elements drive the wine philosophy of Eveningside Vineyards in Cambria, New York. Run by Randy Biehl and his wife, Karen, Eveningside Vineyards was founded in the Niagara Region in 2000. This simple philosophy governs how the Biehls approach wine making — and their lives —  and it’s one that has enabled the Biehls to own and operate one of the most successful wineries in the Niagara Region for over a decade.

In their thirties, Randy and Karen got “the wine bug,” as Randy describes it. They were living in “suburbia” in West Seneca, New York, just south of Buffalo. One Friday night, after running out of beer, Randy and Karen decided to open a bottle wine. The initial taste spurred the Biehls to learn more and ultimately study the art of wine making. Randy did whatever he could to learn more about wine. He and Karen tasted as much as they could, both in New York State and in Southern Ontario. The Biehls also began to make wine in their basement. Randy became passionate about growing vinifera grapes: the traditional Mediterranean and European wine varieties. He went to wine industry conferences where he made connections in the industry that still assist him to this day. He even went so far as to volunteer some of his spare time at Cave Springs Cellars in Jordan, Ontario just to learn every aspect of the business. Randy was engaged in just about every aspect of the business while there. He started by working in the vineyard, and then progressed to work on crushing/pressing the grapes, filtration, bottling, and topping off barrels.

Randy and Karen eventually decided to leave West Seneca and pursue their dream to become winemakers by buying a plot of land in Niagara County. Randy, after much study and an 18-month search, found a piece of land in Cambria that met his important criteria of the proper aspect or slope and pH level of the soil. In describing the criteria he used to select a piece of land to open the vineyards, Randy said, ” The most important thing I think is slope. Secondly, I think the most important thing, and hence we’re on the Escarpment, is pH.”

Randy is driven by the entire process of making wine from vinifera grapes. One of the unique aspects of the wine industry, according to Randy, is that wine is “one of the few things that you take from the ground to the farm to the market.” The joy that he takes from each phase of this rudimentary process is what compels him to produce great wine in the Niagara Region. He particularly enjoys that Eveningside Vineyards started out as a “small operation” and continues to remain so today. This allows the winery to concentrate on high-quality, small-batch production and provides a lifestyle that the Biehls had long dreamed of. “For us, the primary focus was, and continues to be, the lifestyle which it brings,” says Randy. As a probation officer for the United States government by day and a wine maker by night (or whenever time would permit), Randy developed the small winery into a flourishing business. Now retired from his government job, Randy is able to devote all his attention to Eveningside. The Biehls are able to maintain a lifestyle they so enjoy while only being open 180 days or so a year to the public. While Eveningside’s production has grown from 180 cases in the first year to 1,500 cases a year currently, the Biehls are still able to focus on their passion and enjoying the wonderful lifestyle the winery life brings.

In terms of his palate, Randy prefers to drink red wines, although he enjoys all the varieties made at Eveningside. He enjoys “all vinifera that’s well structured and well made.” When asked to choose his favorite wine to drink, Randy told me that it was “like asking which is your favorite child.” When push comes to shove, however, Randy reaches for his cabernet franc. When in the mood for a white, Randy generally goes with the Eveningside Reserve Oaked Chardonnay.

Eveningside produces a full line of wines. They produce both white and red, from dry to semi-dry to sweet. Eveningside produces a few blends, of which the red blends tend to be most interesting to consumers. Eveningside makes a Claret blend, which is an “old British word for…wine from Bordeaux,” Randy told me. Their Claret is made of a blend of cabernet sauvignon and merlot, with a small amount of cabernet franc. Eveningside also produces a very novel blend of pinot noir and cabernet sauvignon, which they call “PinCab”. Randy describes the blend as a “funky and wild one,” and says it has been a big seller for Eveningside. The PinCab hits the nose with traditional cabernet fruit and plenty of oak, and then disperses on the palate as would a good pinot noir. Eveningside also produces a blend of riesling and chardonnay named “Raven,” after one of the Biehls’ Collies.

Of all he’s accomplished, Randy finds it difficult to put a finger on his proudest achievement with the winery, buthe takes greatpride in the evolution of his wines in the bottle. He particularly enjoys the interesting journey his wines take in the bottle and on the palate. He will say, however, that the Eveningside 2012 Dry Riesling is the best they’ve ever produced.

The future holds much for Eveningside Vineyards. While 2013 has been a “challenging growing season,” according to Randy, he looks forward to what the new vintage will bring. In addition to the high-quality wines in future vintages, Eveningside is looking to expand in the upcoming years. In 2015, Eveningside plans to complete construction on a new, expanded tasting facility, as well as a substantial increase in parking on the property.

The Biehls have come a long way since getting the “wine bug” in their thirties. At 54, Randy is now able to devote himself entirely to Eveningside. He and Karen continue to enjoy their passion for wines made from vinifera grapes grown on the Niagara Escarpment and will bring this joy to more in the coming years. Randy believes the future of the region holds the potential for interlopers from the wine industry — that in the next ten years the region will see a presence from the “Big Boys” in the wine industry. While he is not sure if the “Big Boys” will come from Canada, California, or elsewhere, Randy is fairly confident they will emerge in the region.

Even if this invasion takes place, Eveningside is poised to continue the journey the Biehls started over twenty years ago. Eveningside Vineyards is poised to bring more passion, love, and lifestyle to family and friends from all reaches of New York State, and beyond.