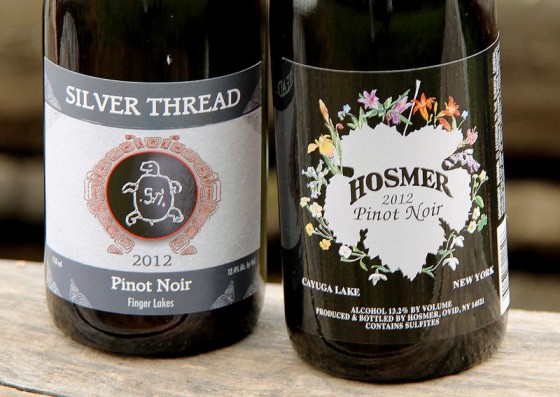 Producing pinot noir is the wine industry’s equivalent to a high-wire act. When done right, it can be spectacular and breathtaking. But it requires courage and commitment, and leaves little margin for error.

Pinot noir is a thin-skinned grape that requires a cool climate with moderate temperatures to be successfully cultivated. Excessive heat can rob the fruit of flavor and acidity. While it is fairly adaptable to different soil types (provided that the soil drains well), it also requires a certain amount of precipitation and long hang time for the variety’s characteristic aromas and complex flavors to develop.

Despite conventional thinking that the Finger Lakes is best-suited for producing noteworthy white wines, recent experience and research has shown that the regfion has the right climatic components to produce high-quality pinot noir as well. But thanks to its location and continental climate, growers in the Finger Lakes have the additional challenges of colder winters and a shorter growing season. These factors result in a smaller margin for error for Upstate growers than their counterparts in France and Oregon (the latter of which is commonly mentioned as the source of the United States’ best pinot).

Harsh winters are a fact of life in the Finger Lakes. A late frost in spring or an early frost in fall are both hazards that Finger Lakes growers sometimes have to contend with. But long, cold winters with extreme temperatures are almost a certainty. While these are typically not a threat to crops, frigid temperatures can have a devastating effect on the vines themselves. Fortunately, because it is prone to mutation, pinot noir is also prolific at producing clones (some estimates range as high as two hundred or more). Some of these clones have demonstrated remarkable resilience against frigid upstate winter temperatures. FPMS 29, Mariafield and Pernand are among the more successful and prominent clones in New York.

Today, there is a dedicated band of growers and winemakers who are endeavoring to master the challenges of producing quality pinot noir in the Finger Lakes. Some of these individuals have prior training and experience with the variety from work in other pinot-producing areas. Ian Barry, winemaker at Villa Bellangello is a good example. “Early in my winemaking career I actually took an internship in Oregon to learn more about it,” Barry explained. “To me, it’s only natural to pursue pinot noir in the Finger Lakes. It’s a cool-climate grape variety and we are truly a cool climate.”

That sentiment is shared by Susan Higgins who, along with her husband Tom, own Heart & Hands Wine Company. “We believe that pinot noir has great potential in the Finger Lakes,” Higgins said. “It is one of the earliest-ripening red vinifera grapes. It does well in a cool climate, achieving ripeness even in cooler and shorter vintages.” Ms. Higgins added, “Finger Lakes pinot noir is distinctively cool climate – done right, it can be hauntingly beautiful.” Heart & Hands Wine Company produces pinot noir and riesling exclusively, and has won critical acclaim for the wines they produce.

As Finger Lakes producers of pinot noir have found out, producing high-quality wines takes more than just the right climatic conditions. According to Ms. Higgins, “Pinot noir’s characteristics mean that a truly tailored approach to vineyard management is a must. The right spraying and canopy management are critical.” She also pointed out that effective pest management, hand picking and careful sorting are other critical aspects to a successful harvest. All of which makes cultivation a challenging and expensive process.

Then there is that word “distinctive.” Today, more Finger Lakes winemakers are committed to producing a distinctive style of wines that are unique to the Finger Lakes rather than imitations of pinot made elsewhere. Flavors of fresh red fruit including strawberry, raspberry, cherry and even cranberry are typically predominant in Finger Lakes pinot noir. Other secondary flavors like vanilla, earth, tobacco and graphite that are sometimes found in other pinots are much less common, broadly speaking. But the best Finger Lakes pinots move beyond those fresh fruit flavors to show an earthy nuance, sometimes clove, sometimes herbs. When the oak overpowers the wine, they’re dominated by vanilla or toast. The strongest producers tie all of these elements together for a complex final product. Finger Lakes pinot is less austere than Burgundian wines, but does not often have the concentration of West Coast pinot. (As a result, it also does not wield the soaring alcohols that are occasionally found in a west coast pinot.) Delicateness and subtlety are also hallmarks of Pinot that is produced upstate.

2012 proved to be an exceptional year for growth of pinot noir in the Finger Lakes. The early summer was wet, but mid-summer temperatures were consistently warm, not hot, and provided adequate opportunity for grapes to ripen to their full potential. According to Katie Roisen, Marketing Director of Hosmer Vineyards, “2012 was a remarkable growing year for Finger Lakes reds.” Hosmer is one of a handful of Finger Lakes wineries that have already released a 2012 vintage pinot noir.

Despite their youth, Finger Lakes pinot noir from the 2012 vintage are enjoyable now both by the glass and when paired with lighter fare. Because they spent a limited time in oak, they are especially fruit-forward. Shannon Brock, who along with her husband Paul own Silver Thread Vineyard, explained the approach. “We make our pinot noir in a fruit-forward style to be enjoyed young. We only use neutral oak in its production, which allows it to come together nicely in a short time.”

As to the decision regarding the release of the 2012 vintage, Hosmer’s Ms. Roisen added, “We chose to release the 2012 Pinot Noir as it spent an ideal amount of time in barrel for that particular vintage and is showing very nicely now.”