Here’s a sampling of what our contributors have been drinking… 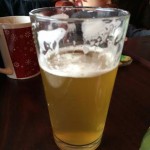 Lenn Thompson,  Executive Editor: Rocky Point Artisan Brewers Harvest Pilsner
Our daughter’s birthday December 5. Our son’s is January 31. Sandwich the holidays in between the two and all of the school and social chaos that ensues — and you get non-stop activity from Thanksgiving until the Super Bowl. It’s important to my wife and I that we give each event its due — no lumping either birthday into the holidays in any way. Part of our strategy is to make sure we create and maintain traditions along the way.

This year, we added a new tradition that I think I’m going to rather enjoy — a visit to Crazy Beans coffee shop in Miller Place, NY after getting our Christmas tree. Red holiday cups or no, I prefer not to patronize national companies when there is a locally owned small business alternative. That’s exactly what Crazy Beans is.

I don’t drink coffee, but my wife speaks highly of the brew there. The kids certainly enjoyed their over-sized hot cocoas with whipped cream in off-beat, mis-matched mugs. And here is where Crazy Beans excites me  — owner Callie Brennan is a beer geek, and as such, has two locally brewed beers on tap at all times. It’s probably not surprising that I went in that direction, with this crisp, refreshing pilsner from a brewery I know very well — it’s only a couple miles from my house. 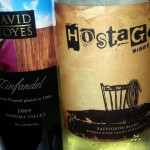 Jim Silver, Business Editor: Small-Production California Wines
I don’t think anyone out there thinks the “drink local” enthusiasm resides in New York only. I’ll admit though, it seems stronger in New York than here in Sonoma. Perhaps everyone is simply used to having access to all this great California wine all the time?

We just visited the St. Francis winery near our new apartment and they were pouring a dozen different and intriguing Sonoma wines. Not a single one was distributed outside of the winery. This week I found a small and terrific seller of hyper-local wines and beers right here in Rincon Valley and they recommended these two (pictured) micro-wineries.

The Hostage Sauvignon Blanc was charmingly plump and flavorful, with a mango and papaya accent to the grassy, gooseberry flavors. The David Noyes Zinfandel, sourced from a century-old vineyard in the valley was really complex, well knit, solid and very long. Amazingly good quality considering the size of the place. The Hostage production — 60cases.  The zinfandel?  All of 75 cases. I knew I’d find interesting little gems out here, rarely if ever seen on the east coast, but I had no idea they’d be so plentiful and so intriguing too! 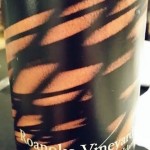 Michael Gorton, Long Island Correspondent: Roanoke Vineyards 2010 “The Hill”
Roanoke Vineyards is the second vineyard you come to when driving east along Sound Avenue on the North Fork.  Many who travel and visit the trail are apt to hit up the first one vineyared they see — and maybe pass on the second. Don’t make that mistake.

Locally, we know all about their Gabby’s Cabernet Franc, the famous 12 rows.  But now, there just might be another little parcel within Roanoke Vineyards worth knowing about. This place is now known as “The Hill.”
Rich Pisacano, who owns the winery with his wife Soraya,  took a vat of Gabby’s Cabernet Franc and decided to top off a vat of cabernet sauvignon — cabernet that grew on “The Hill” — with it.  There it sat in the vat and macerated for nearly three weeks until they co-mingled and became one.  The result is yet another standout blend within the Roanoke Vineyards lineup.
I opened this on Thanksgiving and it was way too tight. It wasn’t shut down, it just needed to be decanted, to get out and get some air.  I had hoped this wine showed well, and while I was not disappointing, I decided to put the cork back in and wait. I forgot about it, and three days later with some leftover Thanksgiving dinner, my wife and opened the bottle. My mouth hit the floor. The aroma’s, the nuances, the sensations that this wine was delivering were, for lack of a better word, incredible. I took no notes, maybe there are some on my Facebook wall, but it left an impression on me.
If after three days this wine was alive, showing well and captivating, then what would this wine be in 10, 15 or 20 years. I think it shows it will age well. I have 5 more bottles in my cellar, this is sold out. I am going to try my hardest to keep this bottle under lock and key, but if you have a few stashed away, keep em stashed, you will not be sorry. 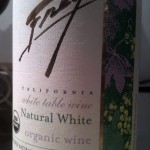 Todd Trzaskos, North Country Correspondent: Frey Vineyards NV Natural White Table Wine
I was shopping the tiny local, kinda hippy co-op for some granola sundries that we’d run low on, and I decided to spend a minute looking at their even tinier wine selection. I don’t often peruse there because the pickings are slim, and it’s right next to the home brew section where I tend to blow my also tiny budget. With a deficit of white wines in the home inventory, I thought maybe I’d find something interesting with which to plug a hole. I saw standard chardonnays, and sauvignon blancs, no riesling, yes a torrontes that I’ve had, not much else, and then I spotted the Frey Organic Sustainable No Sulphites added Natural White Table Wine. That’s a lot of upside features for a lowly table wine, especially one priced at $9.  I remember having their zinfandel before with positive recollections, so why not?

Very pleasant aromatics of mid-summer, floral, herbal, warm living earth, with some general pomme fruit but nothing so direct that it gives away the grape. Being a table wine one might assume it’s a blend making it harder to pin. Not enough ripe apple or peach to show as chardonnay, definitely not citrusy or grassy enough to be sauvignon blanc. Certainly not a riesling. Not super aromatic like a torrontes. Nice and supple, despite the 13.6% ABV, light across the tongue, yet rich with texture…and flavors of anjou pear. Really ripe anjou pear. Hmmm. Anjou. Loire. Guess, chenin blanc? Bingo.
It’s non vintage, yet showing great stuff for the kind of grapes that in past generations might have passed anonymously into cheap gallon jugs of impostor California Chablis.
Big thanks from our daily table to the the Freys who have, over the course of thirty years, taken a small family business big-time. It helps that they grew a big family, with numerous members in the works, and there’s a lot to be said for good stewardship in the winery, and healthy cooperation with the land.

Gibson Campbell, Beer Correspondent: New Belgium Brewing Fat Tire Ale
It’s a little funny reviewing a beer for the New York Cork Report that is not available in New York, but it should be. Fat Tire is the flagship amber beer of New Belgium Brewing, out of Fort Collins, CO. Although it is available in 33 states (and as close as Delaware) it has yet to be distributed to the Northeast/New England area. Asking a beer geek to name their favorite beer is a little like asking a parent who their favorite child is. You’ll be met with a contemplative look and ultimately no real answer. But I can honestly pick this brew as one of my favorite all-time ales.
A perfect clear copper color with some playful lacing pour out of this 22 oz. bomber I found at an undisclosed locale. There is a nice malty aroma with sweet biscuit and hazelnut on the nose. The palate is framed by an almost shy hop character, flaunting the beer’s toasty sweet malt flavors. Toasted marshmallow, nutmeg, and more nuttiness show their flavor but quickly dissipate on the balanced finish. This is a session beer that is rarely rivaled in its drinkability. If you’re traveling basically anywhere outside of the Northeast please drink one for me.

Michael Chelus, Niagara-Lake Erie Correspondent: Tait 2002 “The Ball Buster” Shiraz Blend
At a dinner party over the weekend, my friend and colleague pulled this bottle from his cellar to go with a hearty beef bourguigon. It was big and bold and paired with the braised beef quite well.
The Ball Buster is a blend of shiraz, merlot and cabernet sauvignon from the Barossa Valley, Australia. The nose was full of deep currant and leather notes. More currant and dark red fruit comprised the palate. The wine had aged nicely and featured soft tannins. It could be cellared for another year or two, but this one is ready to be enjoyed now.
I don’t typically enjoy shiraz from the Barossa Valley as so many are just overripe, alcohol bombs. This was far from that. This well balanced showing may make me rethink my stance.