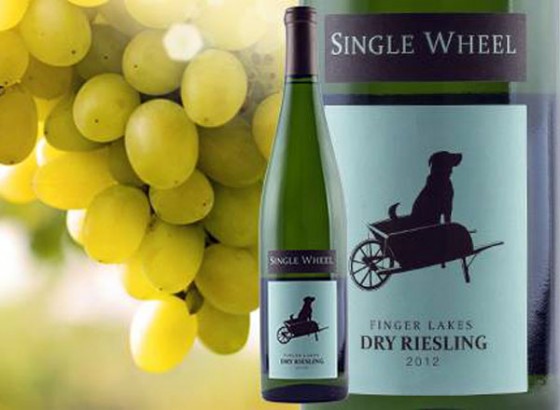 Single Wheel Wine recently joined the growing number of single-vineyard rieslings that are being produced in the Finger Lakes with the release of its 2012 vintage. The wine is produced by Hosmer Winery and is made from grapes that are grown in their Patrician Verona vineyard on the west side of Cayuga Lake.

The concept behind single-vineyard wines is that a wine that is produced from grapes that are grown in a single, speciﬁc location has more consistency in characteristics and quality, and conveys a clearer sense of place than a blended wine. In the case of Single Wheel, the intent is to capture that sense as deﬁnitively as possible by not only focusing on a single area of vineyard, but also by including the added dimension of vintage.

The idea came to Tim Hosmer as he was preparing for vineyard planting in 2012. “I was just really taking more notice to site speciﬁcs where we were planting: what the ground was like, what the slope was like, what side of what lake we were on — things like that, and it was just really making an impression on me how varied the sites are across the region,” he said. “It’s really, really diverse here (in the Finger Lakes). So I decided that I wanted to highlight a super-speciﬁc slice of that diversity as best I could.”

For Single Wheel, Hosmer chose a three-acre block of riesling clone 239 (German origin) that was grafted onto a popular French rootstock (3309 – Vitis riparia x Vitis rupestris). Having planted it in 2003, it’s an area that Hosmer is very familiar with from the subsoil up. His rationale for choosing this particular block was that it had been very productive and had demonstrated both consistency and balance. The block also drained well and had deep soil down to a layer of shale that runs beneath the Patrician Verona vineyard. The 2012 vintage is the ﬁrst to be bottled as a single vineyard wine that was produced exclusively from this block.

Hosmer Winery currently produces 23 other wines, including three rieslings, in addition to Single Wheel. Rather than offer Single Wheel under the established Hosmer Winery brand, a decision was made to establish a separate identify for the wine by giving it a unique name, label and website. Hosmer explained that the approach of creating a separate brand for Single Wheel was “a way for us to establish a link with people in other places like New England or the Midwest through other pathways. It’s a way for us to provide a different experience with our wine, reach new people, and increase awareness through a limited-production, high-end wine with a focus on web-based customer interaction and sales.”

So while efforts to generate awareness of the original Hosmer label have been more regionally-focused and oriented toward wine tourism, Single Wheel is intended to bring attention to the Finger Lakes wine region through broader appeal to other areas of the country. This is part of Hosmer’s goal to bring increased awareness of the quality of the Finger Lakes wine region and “make the words ‘Finger Lakes’ ring out nationally and globally.”