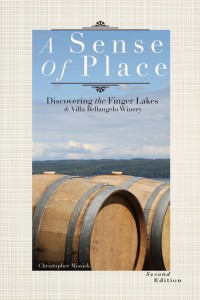 Villa Bellangelo’s Christopher Missick has put together a kind of book that’s uncommon: a marketing document designed to boost his company’s brand, but also a historical document grounded in valuable research. This is a new age of marketing; 30-second television ads and newspaper spots are not bringing the return on investment like they once did. Companies are not just creating ads; they’re creating content, and it starts with explaining the company’s values.

For example, today on Hulu, Chipotle launches its own four-episode miniseries called Farmed and Dangerous. Chipotle hired Ray Wise, a veteran character actor, to lead the show, and if you see the trailer, it looks like high-level network television. In the four episodes, Chipotle’s name is mentioned only once. Instead, the company is choosing to explain their values to their customers. Chipotle is passionately opposed to factory farming, and not just because that might improve sales. In fact, it almost certainly makes doing business more expensive. But that’s part of Chipotle’s ethos, and this new miniseries counts on viewers to understand the company’s values, and then follow that up with visits to Chipotle locations. Lunch tastes better when it feels good, too.

Missick’s book is not as subtle as Chipotle; there are sections on the Missick family, and Bellangelo is the book’s star. But the point is not to be subtle in this case. The point is to create new, enjoyable content for potential customers. Missick has done that, thanks largely to his digging into local history.

The best section of this short, easy-to-digest book is the second chapter, which focuses on the history of the property where Bellangelo now sits on Seneca Lake. Missick might have sensed — wisely — that simply telling customers that Bellangelo was tending vines from 1866 might not have been enough, or even believable. So he went deep, digging up the records, the photographs, and the family histories of previous owners. The result is a beautiful section on the Spence family of the 1800s. If you’re a history lover, and if you love wine, this is the kind of writing that’s unique to wineries: It’s not schlocky or imbued with heavy-handed sales pitches. It’s just history, with colorful detail. After all, who can resist historical nuggets from a period publication known as “The Cultivator and Country Gentleman”?

Now, Missick can get schlocky, too, but if you know him, you realize that’s how he talks in normal conversation. For example, in describing his own wedding celebration in the Finger Lakes, he offers the cliche, “A good time was had by all.” But that’s Missick. He’s sentimental and chivalrous and you’ll have to excuse his occasional groaners, because he’s a relative newcomer with a real appreciation for his new home. Sometimes the maple syrup leaks out, inevitably.

The only real complaint I had was the chapter on the Missick family backgrounds. I enjoyed the detail, but the chapter should have been written in first-person. The entire book is Missick’s voice, with his name on the cover. When he writes about himself in third-person, it’s jarring.

I’m ambivalent about the close of the book, which is a section on wine tasting, with pages left for tasting notes. But I try to recall my early days of wine exploration, and I suppose it can’t hurt to help guide customers from occasional, once-a-year drinkers, to enthusiastic, once-a-week aficionados.

This is a very creative effort, well beyond the surface of modern winemaking. It’s ahead of the regional marketing curve, more in line with the content creation we’re starting to see more often on a national scale. It’s a short, fun read. And the next time I drive down to Villa Bellangelo, I’ll feel much more connected to that piece of land. It would be interesting to see other Finger Lakes wine companies write their own stories, too.