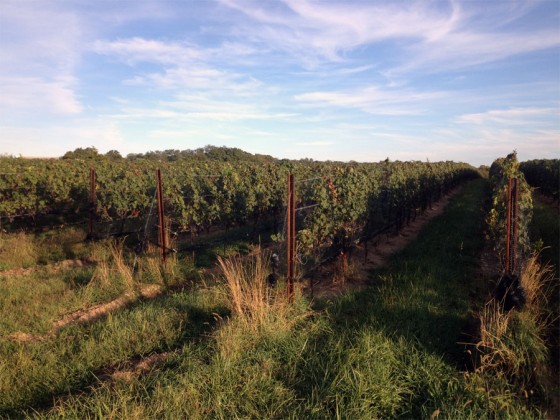 Call it agri-tourism or agri-tainment (or maybe you think those are different things), activities-other-than-wine tasting have firmly entrenched themselves into the Long Island wine country experience. Tactics once employed by only a small handful of mediocre producers are being employed even by some of the region’s best now.

Food beyond crackers and maybe some cheese. Daily, often-loud live music. Events that only tangentially center on wine. Boisterous crowds often more interested in drinking wine than tasting it. That’s the reality of Long Island wine country today and for the forseeable future. At least until local government has had enough.

After years of loudly lamenting the trend and pointing out the potential hazzards, I’ve finally come to accept this new reality.

Do I still think agri-tourism stifles innovation and the drive for better and better wines? Sure. If the drinking (rather than tasting) throngs are happy with “good enough” wines, why bother investing time and money into improving them?

Thankfully, even as agri-tourism has become ubiquitous, complacency in the cellar has not. Perhaps unsurprisingly, at wineries where there is a true passion for it, great wine is still very much the focus.

That’s what I find myself focusing on these days. Someone asked me recently why I’m still so enthusiastic about the future of Long Island wine in the face of a Temecula-style focus on tourism. There are a handful of reasons.

A New Generation of Winemakers
At times, the Long Island wine industry edges on the insular. Winemakers tend to stay in jobs for many years and if they do move around, they seem to take one another’s jobs. Pair that with the current trend of wineries employing a “consultant winemaker” — who may be doing that job for a handful of local wineries — rather than hiring a dedicated winemaker, and you can get a lot of sameness in the wines, even if many of them are tasty.

A half dozen or so younger, full-time winemakers is breathing new life into the region with their intrepid drive to find new ways to make good wines better. Some have held other jobs on Long Island and can now spread their wings and make their wines. Others are new to the region and are looking at every aspect of the grape-growing and winemaking process with fresh eyes and ideas.

They respect those who came before them — and still lean on them for advice from time to time — but continue to push the envelope of what great Long Island wine is and can be. Field blends. Orange wines. Concrete eggs for fermentation. Pet Nat-style wines. Continued experimentation with ambient yeasts. Even vermouths — which are just aromatized wine. New grapes. Those things are all going on right now. It’s fun. It’s important. Some of those things may just be the future.

Vintages Like 2009
By now, we all know that vintage variation is a big part of what makes Long Island wine what it is. Early and late frosts. Scorching summer heat and dry spells. Hurricanes. We get a little bit of everything here. Over the past decade, there have been a handful of hot, mostly dry seasons that have been cheered as “the best” vintages Long Island has ever seen.

I’m less enthused about those vintages. Many of these wines, particularly from 2010, are over-ripe and out of balance. Worse yet, many taste somewhat like poor man’s West Coast wines — the types of wines that Long Island wine fans and marketers have railed against in the past.

I’ve been digging 2009 reds lately. That was a more typical (if there is such a thing) Long Island year. Cool-to-warm with a long, dry end of season. The wines have a freshness and a finesse to them that reminds me why I fell for Long Island wine years ago. I think they’ll age better than 2010s as well.

Don’t get caught up in the hype of “vintage of the century.” Find some 2009s from the best producers and taste what Long Island wine is about.

The Merlot is Still Damn Good
Merlot gets a bad rap sometimes — not only in the greater wine world be even locally. I refuse to blame Sideways so many years after the film’s debut. Instead the culprit is all of the boring, character-less merlot being made around the world. Most of it is flawless, but it just isn’t interesting. It lacks soul and distinctiveness.

That’s not a problem here. Long Island merlot — when it’s done right — is its own thing of beauty. Don’t compare it to merlot from anywhere else. It’s not Bordeaux (let’s bury that comparison for good, shall we?). It’s Long Island merlot and it’s delicious. It’s concentrated but not heavy. It’s fruit-forward, but also complex and earthy with a beautiful minty-herbal note at the end. It drinks well in its youth, but can also age gracefully. There’s nothing like it.

50 years from now, maybe another grape will prove to be the ‘signature variety’ for Long Island. In the meantime, let’s not ignore just how good Long Island merlot can be.