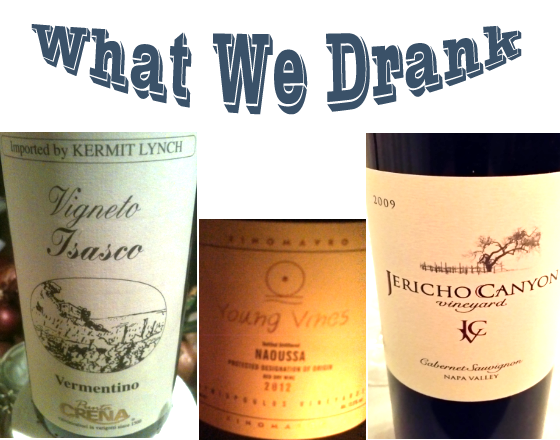 Lenn Thompson, Executive Editor:  SingleCut Beersmiths Full Stack IIPA
Long Island has enjoyed a beer renaissance in the years since I moved here just over a decade ago. Breweries continue to pop up all over the Island. Beer bars (or at least bars with a handful of good beers) are increasingly common. But my section of Long Island has been slow to get on board, with only one or two options if I want to go out for an interesting pint of beer.

No more. We’re still not drowning in craft beer options, but there are a handful of places my beer-loving friends — including my NYCR colleague Michael Gorton — can choose from to raise a pint or five.

America Road Trip Ale House is one of those options and that is where I had this big-but-barely-balanced double IPA from this new Queens-based brewery. Fruity up front — gobs of sweet citrus and even a little peach — with all of the dank, piney character an IPA lover wants, it was a great find.
It was better when you consider I was at the restaurant on a Friday night flying solo with my kids (ages 7 and 2). Daddy needed hops. Daddy got hops.

Evan Dawson, Managing Editor: Barrel-aged Manhattan(s)
Apparently it is now against the law in New York state to barrel your own spirits at home, because, well, because the alcohol industry is not regulated quite enough. This weekend, I was a happy scofflaw, partaking in a little experiment. Our friends transferred a perfect Manhattan into a small, new barrel. We tasted the Manhattan with five weeks in wood, and we tasted a version bottled after nine weeks in wood.

The first version was the consensus favorite, and there was a clear difference. The wood absorbed the heat of the Manhattan after even a mere month. We were left a perfect Manhattan that was round and so frighteningly drinkable, you’d think it was 20 proof. The nine-week Manhattan was similarly lacking heat, but the wood had imparted too much flavor, a kind of odd nuttiness. Not particularly problematic — we drank it, after all — but a touch oppressive by comparison.

I will not attempt to impart some sort of wine-related parallel here. There are no lessons. Well, except maybe one: Some laws are so stupid that breaking them is the only sensible behavior.

Katie Pizzuto, Art Director: The Chocolate Block 2011 (Franschhoek, South Africa)
I can easily drink this wine a couple of days a week, every week of the year, and still not lose interest. That is how much I adore this wine, which I was turned on to by a sommelier at City Winery in New York City during a Bob Schneider concert, when I told her that what I most like in a wine is earthy, mushroomy, dusty funk.

It’s a red blend: syrah, grenache, cabernet, cinsault and usually just a pinch of viognier. In addition to its great earthiness, it’s spicy, plummy and even has some great violet notes, which I’m usually not nuts about in a wine (perhaps growing up in a Cuban household that doused every little girl with Royal Violets perfume has left an indelible scar). Made by Boekenhoutskloof, The Chocolate Block became my favorite wine in 2013. And while this isn’t inexpensive enough for to me to be buying multiple cases at a time ($25 – $35) my birthday’s just around the corner, so let’s just say that I’m hoping someone’s been taking notes at home.

Paul Zorovich, Finger Lakes Correspondent: Thymiopoulos Young Vines 2011 Naoussa xinomavro
Continuing the Farewell Tour, we hit City Winery with some friends for a show by Cowboy Junkies.  A miscommunication with the sommelier gave us a bottle of this red. Whenever we’ve had Greek wine, we have invariably thought, “Why don’t we drink more Greek wine?  Why don’t we learn more about Greek wine?”

This caused the same reaction. On a cold March night, this hearty Macedonian red hit the spot. It is made with only wild yeasts, and is partially aged in various sizes of oak barrels;  the grapes are farmed biodynamically. From what I read, xinomavro (xino: bitter, mavro: black) is frequently compared to nebbiolo and pinot noir. The fruitiness and body were definitely there in the three bottles we drank, with a nice tannic finish. Many pieces I read suggest that this be slightly chilled, and I can get behind that — but not until the deep freeze the Northeast United States is in finally lets up. Maybe over the summer, as a change of pace from all the local wine we’ll be getting.

I wonder whether McGregor or Red Tail Ridge would consider adding xinomavro to their lists of oddball varieties.

Todd Trzaskos, Contributing Editor: Punta Crena 2009 Vermentino (Liguria, Italy)
I was doing the regular Saturday shopping at the local farmer’s market and in the fish case there were some shining local smelt at a price that seemed criminally low, so I had to grab a pound or so to take home for the pan. Before firing up the range-top I figured I’d better find and cool something reasonably appropriate. I grabbed a bottle my brother had found in a bin end in Boston, and left with me during his last visit.

It’s almost criminal what he got this bottle for, but I am nonetheless grateful to have been harboring this Kermit Lynch fugitive. I’ve not had the suspect on ice, but the cellar is already around 57F so it only takes a few minutes in the freezer for the bottle to chill out and provide decently frosted containment.

The nose is dried apricots and sea brine, on the tongue it is ripe apricot nectar, toasted hazelnuts, lemon torrone candy, and white grapefruit juice. The acidity is so subtle that at first, it seems almost too soft on the palate. I initially thought maybe the wine was passing by, for the lack of the zing I normally expect from Vermentino, but I quickly came to realize that it was really a special kind of ripeness, that presented roundly, but drew on to a ridiculously long stony and citrus zesty finish. Dry by the numbers, but succulent by the tongue, the luxurious rich  quality paired beautifully with the simple and clean freshwater sweet flavors of the smelt. I pan fried the whole fishes after an egg bath, then a dredge in corn and amaranth flour, with salt and pepper, then a quick shake of Old Bay seasoning. I’m not sure when I’ll see fresh smelt again, unless I catch them myself, nor am I sure where I might find this wine in their proximity, but I sure am glad that we all pulled off this particular job together.

Michael Gorton Jr., Long Island Correspondent: Jericho Canyon 2009 Cabernet Sauvignon
Last week I was fortunate enough to be invited to the Media Wine Guld luncheon and walk-around tasting in New York City.  The location was Fedelia on 58th street between 2nd and 3rd. This month the topic was “Mountain Estate Wines of Napa.”  There were wines there from such places as Smith-Madrone, Castelo di Amorosa, Mt. Veeder, Tarnmark Hill, Tongi Vineyard and my pick of the day, Jericho Canyon.

Jericho Canyon, a boutique winery producing about 2,500 cases, is family owned and operated.  Nick Bleecher, thewine maker, who was a guest speaker, has been involved in the winery since he was born.  The wines he brought with him stood out.

The wine that captured me was the current release, the 2009 Jericho Canyon Vineyard Cabernet Sauvignon. Dark ripe berries lead with way with notes of dried and fresh picked red and black fruit. Earthy, mineral, spicy notes are followed by distinct tobacco and cedar notes.  Delicious and savory. Clean and balanced with vibrancy, focus and direction. This was the only wine from the walk around that I had to go back for a second glass. I appealed to my palate despite the 14.5% abv. If and when I get back to California, Jericho Canyon Vineyard is on my to do list.