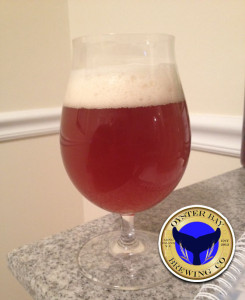 Reviewing IPAs can become quite redundant.  They’re all hoppy, bitter, citrusy, whatever.  I love the style, but it’s prevalence at the beer store can be overwhelming.  There are multitudes of styles, with brewers using varying amounts and varieties of hops and malt.  Why so many of them can taste so damn similar is a mystery to me. For a beer that is meant to knock you over the head with hops and malt, there are some rare exceptions when an IPA can bring subtlety and balance to the table.

This rant was inspired by Oyster Bay Brewing Company’s IPA.

It pours a dark orange-brown color with off-white foam.  There’s a definite haziness to the beer, which says to me there was minimal fining and no filtering, leaving all the good stuff (a little extra protein, which never killed anyone).

The nose brings up some of the typical pine-resin aroma at first sniff. But after digging my nose a bit deeper into the glass, peeled orange and cigar smoke take the stage.

It’s rife with bitterness on the palate, but also sweet malt, candied sugar, and vanilla.  These descriptors are more atypical in regards to this style.  Which is why I like it.  It’s different, with more nuances and a brighter flavor profile that lets the shyer flavors into the party. The carbonation is ample but not bracing, and the scratchy texture adds to the beers’ character.

Owners, Ryan Schlotter and Gabe Haim, brew on a 3BBL system which keeps that nano-brewery taste and mouthfeel. Gabe states that the company will continue to “strive to [make] craft beers that everyone can drink…sessionable craft beers” I would definitely seek out more of Gabe and Ryans’ beer.