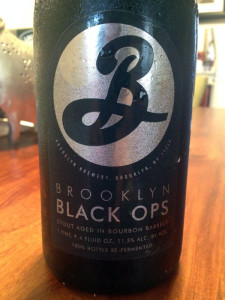 [box_light]“Brooklyn Black Ops does not exist. However, if it did exist, it would be a robust stout originally concocted by the Brooklyn brewing team under cover of secrecy…Supposedly Black Ops was aged for four months in bourbon barrels, bottled flat, and re-fermented with champagne yeast.”  [/box_light]

This stout is a limited production, vintage-labeled beer that is fervently sought after by Brooklyn Brewery enthusiasts. The Imperial Stout’s short supply and known aging potential creates a demand that evaporates Black Ops before it hits the shelves. I’ve had the opportunity to drink a 2008 vintage with four years of bottle-aging, and can fully attest to the complexity and softness this beer develops with time.

The beer pours a dark brown to black with some brown persisting around the glass rim. There is a cappuccino-colored wispy head that dissipates but leaves a bit floating for the remainder of its time in the glass.

On the nose, bubble gum, maple syrup and peanut-brittle are a bit overpowered by the prominent alcohols that tickle your nostrils. As the beer warms and the alcohol blows off, sweet toffee, bourbon and orange “circus peanuts” start to show.

The palate closely matches the nose, but also incorporates more vanilla and whiskey flavors than the aroma. The impression of drinking homemade Irish Cream comes to mind. Chocolate and roasted malt in the mouth are a bit more typical for this style, but the medium-high carbonation from the Champagne yeast brings a surprising lightness to the mid-palate. The bitterness of the beer is soft and subdued by a faint sweetness to round out the long but mellow finish.

The Black Ops 2013 would definitely benefit from a few years of cellaring. Bottle age would help by rounding out some of the harsh barrel notes and integrating the 11.5% alcohol. This beer was great with a spicy Puttanesca sauce, but I’d imagine it would pair better with dry-aged beef or a decadent dessert course.

But then of course, none of this really matters because “Black Ops does not exist.”