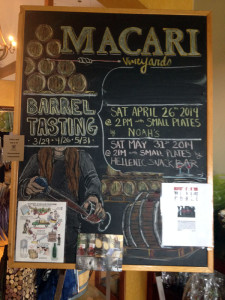 There’s something unique about the experience that makes you feel like you’ve got membership to a secret club, even for those of us who are in and out of working wineries. A welcome chill in the air, necessary for stabilization but still goosebump-promoting regardless of the season, commands your attention. Take notice! Something interesting is happening here!

Steel tanks stand next to endless rows of neutral oak barrels, each with unique with chalk scribbles that mean almost nothing to bystanders. It makes you wonder wonder what’s happening to the liquid inside.

This is wine in its natural habitat.

You can learn a lot about the guts of a winery when the curtain is lifted and you get a chance to sample their wines while they’re still in incubation. And earlier this month, I got one such opportunity at Macari Vineyards.

What do you know about them?

You must’ve heard the name around. And if you’re super Midwestern like me, you’ve been saying it wrong this whole time. It’s “MA-CARE-EEEE” unlike the crazy nasal butcher job ” MA-CAAAAR-EE” I’ve been tossing around for several years.

So now you know how to pronounce it – but you should also know they are the workhorse of Long Island. The sheer number of grapes grown here (sauvignon blanc, chardonnay, viogner, grüner veltliner, cabernet franc, cabernet sauvignon, malbec, merlot, petit verdot, pinot gris, pinot meunier and syrah) makes you wonder if the winery is diverse or overextended. When I go to a tasting room and see 39,741 wines to try and most of them in vastly different styles, I sometimes assume a sad, but still happily alcoholic ‘Jack of all Trades, Master of None’ situation. 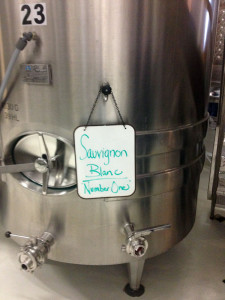 But that isn’t the case with Macari wines. In fact, I am always surprised how I like basically everything I am handed at this local winery.

Now that you know how I feel about barrel tastings and Macari in general, here’s what we tasted:

(Note: The “WE” involved here is myself and….. my husband. He likes wine, but doesn’t obsess over it and oddly never wonders if it’s socially acceptable to wear gewürztraminer as a perfume. Part of the point of these tasting events is to let people who don’t work in the industry, but love to drink wine, in on the magic. So I thought it would be fun to throw in his minimal syllable comments.)

Unnamed White Blend of Chardonnay, Sauvignon Blanc, Riesling and Viognier
I found it to be incredibly fresh with lemon on the nose and a lime zest and apricot on the tongue. Delicate in flavor and texture. Husband said: “Spring Time In Ireland.”

**Will be released late June**

Sauvignon Blanc 2013 – “Katherine’s Field”
Lots of mouthwatering acid you know will still be present on a normal level in the bottle. Grapefruit and Guava. Sign me up for a case. Husband said: “Pungent.”

**Should be in the bottle by Memorial Day and Released for their wine club in June. Accessible to the Proletariat later this summer**

Sauvignon Blanc 2013 – “Number One”
Fuller than the other sauv blanc. It had better be with nine days of skin contact. Heady mouth feel. A tangy bouquet of white flowers and clementines, incredibly herbaceous. With a crazy long finish. Husband said, “Pickles.”

**Released in the Fall**

Cabernet Franc 2013
In the barrel since December of 2013. Tight, light and obviously younger than Miley Cyrus’s butt implants, as it wont be realized until Summer 2015 at the earliest. Tart Cherry. Spicy with a Black Tea flavor. Husband said, “Light Peppery”

Malbec 2012
Heavy on the mushrooms. Dense. Heavy. Juicy with dark berries and stewed plums and a hint of flexibility. Husband said, “Chocolate, but then blackberry. I don’t know what this is.”

**Not sure when it will be released, potentially March 2015**

After hanging out in the dark, we looked to the light and hung out in a private area of the tasting room and tried four of Macari’s “finished” wines paired with spring snacks from Chef Noah Schwartz – chef/owner of eponymous Greenport restaurant.

It doesn’t matter how many times or where in the world I have a chance to taste unfinished wines this way; I’m always excited to get in on the ground floor. Meeting a wine in these stages allow you to follow its narrative through the ebb and flow. She’ll be become an old friend you’re psyched to see when she pops up again randomly…days, months or years down the line.

If you want to check out this interesting, educational and frankly, delicious event, you have one more chance. Sign up for the tasting at Macari Vineyard’s Mattituck location on May 31 at 2 p.m. $50/ per person. It’s more wine that you should probably consume in the middle of the day. This one will feature food from East Marion cult favorite Hellenic. Go. Do it.