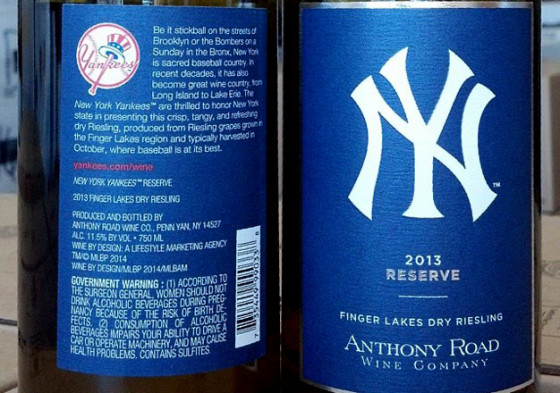 Yes, it’s the same wine as the standard Dry Riesling. But labels have drawing power, and the New York Yankees offer one of the most powerful brands in the marketing world.

In addition to the Yankees, a handful of major league franchises, including the Boston Red Sox, San Francisco Giants, New York Mets and Texas Rangers offer team-branded wines under MLB licensing agreements.  The lineup for most teams features red, white or sparkling wines.  Both the Giants and Red Sox give fans the chance to purchase “Championship Brut” wines to share in their recent World Series victories.

Anthony Road is the first winery outside the state of California to be selected as a supplier of  MLB-licensed team wines.  According to Anthony Road Associate Winemaker Peter Becraft, “The Yankees previously offered two California wines, but decided that they wanted to offer a New York wine as well.  So we were approached about working with them on that project.”  Becraft said it was an easy decision, and an exciting project for the Anthony Road Wine Company.

Each of the team wines display the MLB-sanctioned logos of the teams that they commemorate.  The prominent feature of the “New York YankeesTM Reserve Dry Riesling” is the iconic interlocking “NY” in Tiffany-styled lettering on a field of dark blue.  The front label also notes the vintage and recognizes Anthony Road Wine Company as the producer.  The reverse label includes the inscription:

[box_light]“Be it stickball on the streets of Brooklyn, or the Bombers on a Sunday in the Bronx, New York is sacred baseball country. In recent decades, it has also become great wine country, from Long Island to Lake Erie. The New York Yankees™ are thrilled to honor New York state in presenting this crisp, tangy and refreshing dry Riesling, produced from Riesling grapes grown in the Finger Lakes region and typically harvested in October, when baseball is at its best.”[/box_light]

The 2013 vintage of “New York YankeesTM Reserve Dry Riesling” was released in limited quantities.  It is available on the MLB.com site as well as at the Anthony Road tasting room on Seneca Lake.