On Wednesday, Port Jeff Brewing Company, nestled alongside Port Jefferson Harbor, released its first batch of Party Boat IPA in 12 oz. cans — the first time the brewery has brewed and canned a beer on Long Island.

Why IPA in cans you might ask? Well, besides avoiding degradation of the beer from UV light exposure and lower costs than glass — it just feels right. We’re almost programmed to drink beer from a can.  Man buys can, man opens can, man drinks beer. 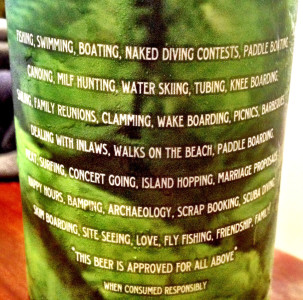 Before the explosion of craft beer, you didn’t have to think about beer as much while drinking it. This beer reminds me of those days.  The back of the can explains it best.

If I had poured it into a glass, I’d imagine it would smell like citrus, biscuit, tangerine and fresh pine. It would probably have a dark gold to orange color with a wispy head and light lacing.

In the mouth, the beer is vivacious, fresh and full of pine-driven hop flavors. The malt keeps the racy hop character in check and rounds out the finish with a barely perceptible sweetness. The freshness of the beer is evident after only being in cans for a day or two it is really lively. It’s refreshing enough to drink out in the sun, but flavorful enough to make the beer fun.

Also, the cans seem to drain faster than bottles so buy a lot if you’re barbequing. The best part of this beer was drinking it, not thinking about it, and going back for more.

(3.5 out of 5 | Very Good, Recommended to Outstanding and Delicious, Highly Recommended)