With TasteCamp 2014 in my rearview mirror, I’ve spent some time considering event — what we tasted, who we talked to and what they said — and while I’m not typically the biggest fan of “Top 10”-style writing, I think my iinitial thoughts lend themselves to the format, so that’s what we’re going with.

More generally, the event couldn’t have gone better. My c0-host for this year’s event, Carlo DeVito of Hudson-Chatham Winery  (make sure you try his Chelois and Baco lineup), worked his tail off to put together an event that truly immersed our group of 20 writers in the region. The focus was wine, but we also tasted a lot of cider and spirits and talked to people from just about every corner of the Hudson Valley beverage community. All of our event hosts along the way were prepared, welcoming and generous. For that, I’m thankful.

Best of all, I think that our group came away impressed impressed by what they saw and tasted — maybe not across the board, but I think even those within the region would agree that the Hudson Valley, despite its potential, is playing catch-up with other New York regions.

Personally, my already-high expectations were exceeded at nearly every turn. I tasted only a wine or two that was overtly flawed (a change from my last extensive visit a few years ago) and some of the producers that I once thought had a long way to go in terms of quality have made great strides. Some of those producers forced their way onto this list.

Millbrook Winery 2013 Proprietor’s Special Reserve Tocai Friulano: A long-time favorite, this was a wine I knew I’d like going in and it didn’t disappoint. Peachy and fresh, it’s not going to wow you with complexity but it will keep you coming back for its deliciousness.

Everything at Hillrock Estate Distillery: I knew that our visit to Hillrock — the only field-to-glass distillery in the country does its own malting — was going to be special, but I wasn’t prepared for just how amazing the place (and those operating it) is. I came home with a bottle of the bourbon, but the single malt and the double cask rye are calling me. My colleague Evan Dawson will publish a story on Hillrock this week.

Robibero Family Vineyards 2013 87 North: No matter how good many of the vinifera-based wines were over the weekend, you can’t talk about the Hudson Valley without at least touching on hybrids. This fresh, fruity blend of Cayuga from the Finger Lakes and estate-grown vidal blanc is another summer favorite of mine. Tasting five-year vertical of this wine was a special treat too.

White Cliff Vineyard 2013 Reserve Gamay Noir: I’ve long lamented the lack of quality gamay in New York — because I love the wines of Beaulolais (not nouveau). I’m not sure how owner-winemaker Mike Migliore’s rendition never found its way into my glass, but it was a revelation. More Hudson Valley growers should be growing it. It may have been my favorite red wine of the trip. 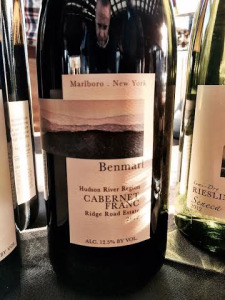 Benmarl Winery 2012 Ridge Road Estate Vineyard Cabernet Franc: Not long after his parents bought Benmarl back in 2006, general manager and winemaker Matthew Spaccarelli has worked to revamp the business. He’s eliminated the wines made with California fruit and has started to focus on some estate-grown wines, like this ripe, earthy, distinctive cabernet franc.

Tuthilltown Spirits Half Moon Orchard Gin: At first I was a bit disappointed that Tuthilltown hadn’t brought any of its whiskeys to the tasting (because they are good) but then this hugely flavorful, unique gin hit my glass. It’s so interesting that I’m not sure I’d want to cover any of the flavors with tonic or lime.

Tousey Winery Rieslings: If you’re a riesling lover — and most of the TasteCamp gang is — then you need to try these Hudson Valley-grown rieslings. We tasted a handful of different wines from a few vintages and some were truly outstanding. The 2012 and the 2013 Reserve will hold their own with all but the very best Finger Lakes wines.

Victory View Vineyard 2013 “Turning Point” Marquette: In the northern extreme of the Hudson Valley, owner-winemaker Gerry Barnhart is focusing mostly on Minnesota hybrids that can withstand the often-extreme weather of his site — with impressive results. This Marquette shows black and blue fruit with a subtle earthy streak and smokey notes from time in American oak. I look forward to trying more of his wines in the future. 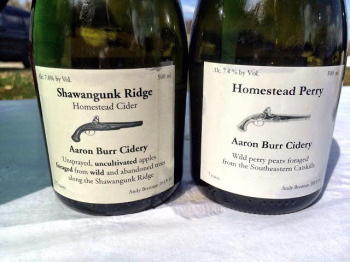 Aaron Burr Cidery Foraged Ciders: Super-small production (most under 100 cases of 500ml bottles) with many made with foraged apples and pears from ‘wild’ and abandoned orchards, these are singular, intellectually compelling ciders that don’t taste like anything else I’ve tasted.

I didn’t even know that we were going to get to taste these unicorn ciders, so it was a special treat. Don’t miss any chance you have to taste these.