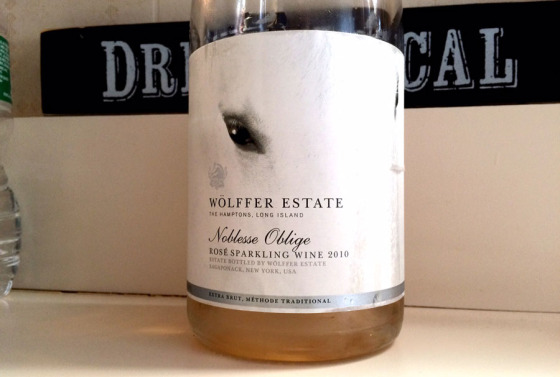 Wolffer Estate is one of the better-known and recognized brands in Long Island wine. Their standard dry rose is nearly ubiquitous in the warmer months (not to mention their barrel-aged rose and the new “Summer in a Bottle” bottling). Winemaker Roman Roth is also making some of the best merlot-based blends and cabernet franc on the island.

What doesn’t get nearly enough attention is the sparkling wine program at Wolffer — including Wolffer Estate 2010 Noblesse Oblige Extra Brut Rose Sparkling ($40). Made from pinot noir and chardonnay, it offers aromas of fresh apple and apple skin with hints of red berries.

Though not aggressively effervescent, the palate is dry, fresh and balanced — with apple, red berry and floral notes, well-incorporated acidity and a long, floral-saline finish. This is the kind of sparkling wine that is fruity enough to appeal to a wide array of people but still focused and elegant enough for your wine geek friends.

(3.5 out of 5 | Very Good, Recommended to Outstanding and Delicious, Highly Recommended)