At this point, winter has been such a relentless bitch many of us will drink anything to keep warm and shut out the dark, grey days. But with Spring fast approaching, I’m here to remind you to be mindful of what’s in your glass. Don’t just slug whatever bottle you have on hand in order to stay indoors.

For me – NY Drinks NY heralds Open Season on Spring wine. New, shiny things I have yet to taste. This yearly event brings together three dozen or more wineries from across New York State for a Grand Tasting and … marks the day in the calendar when my mind turns to outdoor aperitif beverages.

This year, I searched* high and low for the top four* wines to help usher in the new season and say a big fat bye bye to this bullshit winter. I also enjoyed finding some fun things that weren’t the norm from each region. Yeah, there were great Rieslings from FLX and such, but it’s a new dawn, it’s a new day and I’m feeling good.

Dr. Konstantin Frank 2014 Grüner Veltliner – This wine was so lush with fresh apricot and incredibly concentrated tropical fruits I might not have guessed it as Grüner from first sniff. Clean, virtually dry and mouthwatering. It’s like if The Arnold did his spiel wearing a Carmen Miranda headpiece. Weird, but quietly fantastic. This fruit salad dressed in GV clothing can be yours for $15.

Paumanok Vineyards 2014 Rosé – I tend to applaud their Chenin Blanc as my favorite thing out of Aquebogue, but their Rosé is strawberries and cream and light and perfect and will live en mass in my cellar this summer. British Garden Party Pink. 99 % Cab Franc and 1% Merlot. The most expensive bottle of the bunch at $20. Worth it. 99 problems, but the price ain’t one. 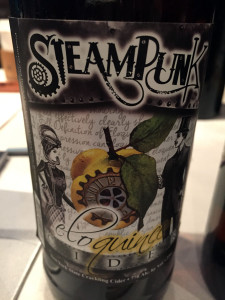 Hosmer Winery 2013 Sauvignon Blanc – The first bottle from vines planted in 2010 near Cayuga Lake. A new world flavor: Grapefruit, honeydew, bright. The texture was more old world, but lacking the minerality that tends to accompany Sauv Blanc from those regions. A real Victor \ Victoria kind of wine. A steal at $16 a bottle.

Leonard Oakes Winery Eloquince Cider: Despite the ridiculous name that I’d like to wear on a tshirt, I fell hard for this new cider situation. It’s t80 %he original Steam Punk blended with 20% quince, gives you 110 percent of awesome. I wasn’t sure it was possible to improve on the Steampunk, but they did it. Fan Girl Alert. Crazy Crisp and Mellow. A little spicier and with a little more texture than it’s half brother.

Two Trends I Noticed
NY Drinks NY 2015 was a year of mostly Long Island and Finger Lakes wineries. One lone Niagara winery representing and many less offerings from Hudson Valley. Neither were part of the seminars this year. These regions are making more wine then ever and weren’t a big presence. Is that because the event itself is cost prohibitive? Would love to know why.

Rosé Rosé Everywhere….And Not a Drop to Drink. From the light-touch Provencal-style to the savory flavor bombs: Everyone.Had.A.Pink.Bottle. MANY of them Cabernet Franc. Only some of them good. Was this due to the grape glut from a major 2014 growing season? Market Trend? Love for the color?

Oh and in case you were wondering, only 11 months until the next one!

*I chose to focus on white and rosé. This does not reflect the currently status of Reds in New York State.

*Four because ten was too many and five down to four to keep this close to 600 words. Lenn says I talk too much.