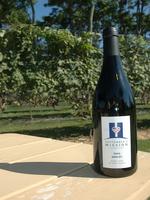 Lieb Family Cellars has teamed up with September’s Mission – a nonprofit foundation that funds educational and cultural programs in remembrance of the victims of 9/11 – to help the many families affected by the tragedy.

To commemorate the three-year anniversary of 9/11, the Mattituck winery has produced 6,300 bottles of a special 2002 Merlot, which is available at its tasting room for $9.11 and is also available for resale to wine shops and restaurants in New York State.

By donating 91.1 cents from each bottle sold to September’s Mission, winery owners Mark and Kathy Lieb hope to raise close to $6,000 for the foundation. Both worked on Wall Street prior to 9/11 and lost friends and former colleagues in the World Trade Center attacks.

“We wanted to contribute in our own way to ensure that the tragic events of 9/11 are never forgotten,” said Mark Lieb. “The commemorative wine gives our winery, as well as restaurants and individuals, the opportunity to participate in the annual observance and to support September’s Mission.”

The special Merlot is the brainchild of Gary Madden, general manager of Lieb Family Cellars.

“Through the ages, wine has had religious and ceremonial significance, so it is fitting that it play a role in the annual remembrance of 9/11,” said Madden. “We hope restaurants and wine shops will join us in honoring the memory of those who lost their lives and help support September’s Mission by offering this wine to their customers.”

Monica Iken, who founded September’s Mission after losing her husband in the 9/11 tragedy, is deeply appreciative of the donation.

“Whoever purchases this special wine will not only be remembering the heroes and innocent victims of that terrible tragedy, but will be supporting our efforts to develop programs at the future memorial site, as well as a 9/11 ‘Living Memorial,’ our Internet project that will be accessible to everyone.”

The young, clean Merlot, blended with a just a little Cabernet Sauvignon and aged in French oak, is made exclusively of grapes grown on the North Fork and features aromas of blackberry, plum and black currant.

The 2002 Commemorative Merlot is available at the Lieb Cellars tasting room located at 35 Cox Neck Road in Mattituck, at www.liebcellars.com, or by calling the winery at 631-734-1100. Restaurants and wine shops in New York State can purchase the wine directly from Lieb Cellars.