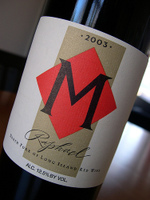 Recently, The Modern, the Museum of Modern Art’s
(MoMA) fine dining restaurant started pouring “M” as its house red.
Every restaurant has a house red, so what’s the big deal?

Well, The Modern boasts a wine list of over 900 wines, but instead of
choosing a wine from France or California as its house red, it stayed
much closer to home — the North Fork of Long Island. Richard
Olsen-Harbich, winemaker at Raphael in Peconic, and Stephane Colling,
wine director at The Modern, developed “M,” a custom blend of
95% merlot and 5% Malbec from the 2003 vintage.

Colling, a native of the Alsace region of France, is a veteran of two
three-star Michelin restaurants (Au Crocodile in Strasbourg and Michel
Roux’s The Waterside Inn in Bray, England). When asked why he chose
Raphael and Olsen-Harbich to create this wine he said, “I chose Long
Island because we are in New York State and I’m not (just) looking for
‘big’ names. I think Long Island has a great potential. I tasted a few
wines from Raphael about a year and a half ago before The Modern opened
and kind of fell in love with the style of their wines. I saw a great
potential in those wines, something different.”

By the glass, “M” sells for $11 and it is $40 per bottle. But, do
diners at The Modern turn up their nose at this Long Island wine? “Many
are surprised but what is important is what they have in the glass. I
sometimes just blind taste them, listen to them and ‘teach’ them a
little bit. I don’t like pre-conceived ideas,” he commented. In fact,
“M” is now his second most ordered wine by the glass.

In describing the wine to customers, Colling uses “Old World” and told me, “I compare the wine to the right bank of Bordeaux between Pomerol and St
Emilion.” High praise indeed, but after tasting the wine myself, not as
crazy as it might sound.

The wine is dark crimson with a nice balance between dark berry fruit
and toasty-smoky aromas on the nose. The soft, somewhat fruity palate
is dominated by merlot, but the 5% malbec is what makes this wine
special and reminiscent of Bordeaux. It brings complexity with
earthy, tobacco and smoky notes. The tannins are gently gripping on the
finish and it’s easy to see this wine along side a wide array of
dishes.

There are two important things I look for in any house wine —
affordability and versatility — and this wine fits the bill.

Only 300 cases were produced, but Colling hopes to continue The
Modern’s relationship with Raphael, even if they “haven’t spoken about
it yet.”