I find myself defending Long Island wines way more
than I should have to. First, I have to defend them against those who
just don’t see what the big deal is. To them, I say that there is
absolutely no doubt in my mind that there are locals making outstanding
wines. Not every wine or winery—but some. And the number seems to grow with
every successful vintage.

And then there is price. That’s the other complaint—and honestly, it’s
a bit harder to stand up for Long Island wineries in this regard. There are
a lot (and I mean a lot) of over-priced wines being made here. But, if
you know the wines, there are also some great deals—including some that
cost $30-50 a bottle. Remember that value is possible at any price
point, not just wines under $10.

Theresa Dilworth, co-owner of and head winemaker for Comtesse Therese,
is refreshing because she is one producer who could probably sell at
least a few of her wines for much more than she charges today. Let’s
hope she keeps it that way. 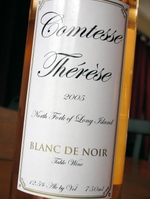 Dilworth’s 2005 rose hasn’t been released yet, but it’s always one of
my strawberry- and cherry-flavored favorites. She has released a rose
however, 127 cases of her 2005 Blanc de Noir ($18). Don’t be fooled by
the name, it’s not a sparkler, but it is quite unique. Made from merlot
and cabernet sauvignon grapes, the nose is dominated by sweet, floral
peach aromas. The peach is a little overwhelming actually. Its medium
bodied and—again—very peachy with only a little bit of berry beneath.
Wait for Dilworth’s next rose release.

A few weeks ago, Lisa Granik wrote an op-ed in the New York Times that,
among other mis-informed ramblings, stated there isn’t enough
experimentation on the East End. I hope Ms. Granik gets to taste
Dilworth’s Comtesse Therese 2004 Hungarian Oak Merlot ($18), which is
(as the name implies) aged in Hungarian—rather than French or
American—oak barrels. This is a high-production wine for Comtesse
Therese, even though only 304 cases were made, and it’s a medium
crimson in the glass and shows an old world mix of dry earth, cherry,
raspberry—and black pepper spiciness brought on by that Hungarian
barrique. Similar flavors carry into the palate, which is lighter body
that you might expect and just a little rustic, with tannins that
aren’t quite integrated completely. The oak influence might be a little
heavy here, but enjoy this red with pizza and other red-sauce Italian
food.

Dilworth also makes two other merlots—a 2004 Traditional Merlot that
hasn’t been released yet, and her 2004 Chateau Reserve Merlot ($30). I
tasted Traditional last weekend, but it’s not quite ready for release.
Still, it’s showing nice balance between fruit flavor, spice and oak
influence. That bodes well for its future.

The Chateau Reserve, however, was the best of the current releases—and
probably the wine that best exemplifies Long Island’s unique terroir.
The nose offers fruity blackberry and blueberry aromas accented by
subtle earthiness, light vanilla and just a little oak. Nicely
balanced, it shows fruit-forward flavors cherries, blackberries and
blueberries with ripe, well-integrated tannins and an elegant, lengthy
finish. It’s a deal at $30 and should age beautifully for 5-7 years.
This wine hasn’t been made since the much ballyhooed 2001 vintage, and
there are fewer than 100 cases available.

It’s hard to like the boringly straightforward name, but Comtesse
Therese’s 2004 70% Cabernet Sauvignon 30% Cabernet Franc ($20) is a
soft, slightly juicy blend that avoids over-oaking well. The berry
aromas and flavors you’d expect are there with subtle cinnamon,
chocolate and violet notes as well. The tannins are soft and the
noticeable acidity makes this a terrific food wine. This was my
second-favorite wine of the lot. And at least Dilworth didn’t resort to
calling this a meritage.

The 2003 Cabernet Sauvignon Reserve ($25), however, was a little disappointing. It suffers from
heavy-handed use of oak a little bit. There just isn’t enough fruit
flavor to stand up to the oak here, resulting in a slightly disjointed
wine. Maybe some additional bottle time will bring harmony. Maybe 2003
was just an off year.