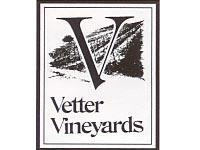 I obviously taste–and write about–a lot of different New York wines. The vast majority come from Long Island, but there are a lot of wines from the Hudson River Valley and Finger Lakes regions that pass my lips too.

But, western New York state has proven a tough nut to crack. For one, I can’t get any of their wines locally. And two, few of them seem very press savvy. I’ve emailed all of them on numerous occasions asking for press kids and for a list of places where they sell their wine in the NYC metro area. Usually my emails go ignored.

But one winery in Westfield,
NY on the shores of Lake Erie–Vetter Vineyards
on the Chautauqua Wine Trail–did get back to me. They even sent me some wines to taste.

As a youth growing up in Western Pennsylvania, my family had a three-season cottage on Chautauqua Lake. And, with teachers for parents, we used to spend a lot of time there during the summer. But we never knew anything about any local wine industry. We were too busy enjoying the first-rate wings at a place called The Casino on Bemus Point.

From the sounds of it, Vetter Vineyards hasn’t always focused on quality over quantity. But, current owners Mark and Barbara Lancaster–who bought the wine estate from the Vetter family in 2003 are out to change that.

Mark has over 20 years experience in the wine industry and he hopes to produce smaller batches of
quality wine that can be made from the grapes they grow on their own land, including pinot noir, shiraz, merlot, pinot grigio, riesling, cabernet sauvignon and cabernet franc. The Lancasters want to make
Vetter the region’s premier boutique winery.

Unfortunately, after tasting four of Lancaster’s wines, I think they have a ways to go to accomplish that goal–at least by Long Island wine standards.

My blind tasting started off well enough, with a simple-but-well made dry riesling. So pale that it is almost colorless, it’s a clean, well-balance white. The nose is fairly aromatic with grapefruit, lime and other citrus mingling
with just a little mineral character. Somewhat Alsatian in style,
the wine has medium body and flavors that closely match the nose
with a stony, minerally finish. After tasting this one, my hopes were sky high for the rest
of the Vetter wines.

Unfortunately, the chardonnay suffered from a complete lack of fruit. New, raw oak dominates the nose and while there is some nice creaminess and vanilla in the flavor profile, the oak just seems too heavy handed here, masking any fruit character
that was there to begin with. Maybe chardonnay does better in this region when made without barrel fermentation and/or aging.

Next was an extremely intriguing
wine, a Traminette. Never heard of that grape? Don’t worry, it’s
not that well known outside of central and western New York. A hybrid grape created at Cornell University, it was made by crossing gewürztraminer
with sevyal blanc. The result, at least in this bottle, seems tobe a wine that is strongly reminiscent of gewuerztraminer, but has
some of the cold-hardiness of seyval. The nose is intense with flowers, lychee and pineapple. The palate, while a little sweet and lacking
acidity, has bold flavors and a little spiciness. Overall, the balance
is off here, but the potential seems to be there. Don’t turn your nose up at this hybrid.

The only Vetter red wine I was able
to taste, a 2005 pinot noir, is barely drinkable. I wish I could
say that the bottle was corked, but it definitely wasn’t. Maybe it
was just a bad bottle, but the flavors reminded me of a red delicious
apple that you bit into and then leave on the counter–you know,
the way it browns–and then bite it again. There’s a little stewed black plum there too, but this is clearly not what I expected. I wish I had a second bottle to try, really.

These wines aren’t available in any local shops that I know of, but you can visit their website for more information.