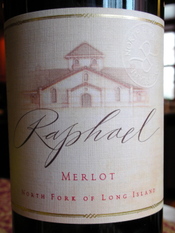 Editor’s Note: Yes, I do still write for my blog.

When
Richard Olsen-Harbich, winemaker at Peconic’s Raphael, started his
winemaking career, it was in the Finger Lakes region of central New
York.

As you all know, the Finger Lakes region is best suited —  and best known —  for its
aromatic white wines, particularly riesling. Much of the time, the
classic red varieties of Bordeaux struggle to ripen in central New
York. Some wineries make wines like merlot and cabernet sauvignon
anyway, but many of the better ones are made using fruit (or bulk wine)
grown here on Long Island.

Anyway, Olsen-Harbich may have
started his career dealing mostly with racy, minerally whites, but in
his 27 years making wine on Long Island, he’s more than adjusted to the
climate and grapes here. In fact he doesn’t even make riesling right
now, though they have planted some riesling in the back of the vineyard
for the future.

Still, Raphael’s focus is set squarely on red wines, particularly merlot. They grow a lot of it, and make a lot of it too.

For some time now, they have been pouring and selling their 2000 and 2001 First Label merlot, a wine only made in the best years and one that is most definitely not meant for immediate consumption. While approachable, they continue to develop with time and the 2001 is tasting terrific right now.

The 2000, however, is no longer available and they’ve released the new 2002 vintage. Olsen-Harbich, who has seen more than 20 Long Island vintages, considers 2002 a tremendous vintage for merlot and it shows in this new release, which was blended with 3% malbec.

The wine itself is a dark, almost inky purple and extremely aromatic with blackberry and blueberry fruit aromas accented by leather and minty notes. Similar character carries over to the full, well-structured palate that has a lengthy, minerally-graphite finish. The tannins are ripe, but plenty apparent, bringing grip and pointing to terrific aging potential.

For $30, you’ll be hard pressed to find a better local merlot.