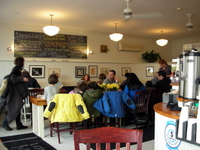 By Lenn Thompson, Founder and Publisher

There is still a dire lack of quality, affordable lunch options for people visiting wine country.

Even before Jadckson came along, Nena and I usually ended up at the Village Cheese Shop, located on Love Lane in the cute little village of Mattituck. We’d pick out a few cheeses, get a baguette and maybe some cured meat and olives, and take it to a winery to nibble on. But, just up the street is a relatively new lunch destination that gives us another good option: Love Lane Kitchen.

When making those cheese-focused trips to Love Lane, we’d seen Love Lane Kitchen several times, but hadn’t stopped in. How was the food? Would it be family friendly? Well, LENNDEVOURS reader and fellow father of a 1-year old Dan, clued me in that it’s extremely family friendly and tasty, so we stopped in last weekend to check it out.

We came away with mixed, but mostly positive, feelings. We’ll absolutely be back to try it again.

It’s a great little casual cafe with good energy and bustling activity
(good to keep the little guy engaged and not bored), a nice self-serve
coffee and tea bar and a menu that features items that are familiar,
but not ‘same old.’ There is a large blackboard menu with specials. I’m
a sucker for blackboard menus, so this hooked me.

As you can see, the blackboard features words that are hard for Nena
to resist…Lobster Roll. That’s what she ordered, along with a side of
fruit for Jackson to experiment with.

Dan had clued me in that the Cuban sandwich was good (and I almost
always order one when available anyway) that’s what I went with.

As we waited for our food to arrive, the large table in the center
of the restaurant filled up with several young children and their
parents, which was perfect given our current situation. You see,
Jackson is starting to feel out his voice more and more and he tends to
yell a little bit here and there. We’re still teaching him about his
"inside voice" you could say. Usually he yells "DaDaaaaaaa" so I don’t
mind it all that much, really.

Nena
also ordered onion rings for with her lobster roll because, well, who
doesn’t love onion rings. Unfortunately, they were probably the
highlight of Nena’s plate. The sandwich looked delicious enough, but
she found the flavor a little bland and the lobster was tough. I
thought she was exaggerating about just how tough it was until I saw
her trying to cut the claw meat with just her fork. She was having to
work way too hard.

My Cuban sandwich could have been served hotter, but it was delicious
and everything a Cuban should be. The pork, which is roasted in house,
was moist and the combination of that pork with ham (more pork) cheese,
mustard and pickle was great. And the roll was crispy on the outside
and soft in the middle.

And these fried plantains…they were delicious. Jackson liked them too.

The next time we go, I think I’m going to order the Kobe beef hot
dog, which is served Chicago style. Or maybe the Pad Thai if they have
it again.