"Our wines are made in the vineyard." 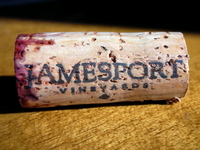 It’s a wine industry cliché that you’ll hear at molst any winery these days. It’s so overused and appears on so many
boilerplates that much of its meaning has been watered down and lost.

Like
many clichés however, it is firmly rooted in fact. Even the world’s
greatest winemaker won’t be able to make outstanding wine from un-ripe,
low-quality fruit.

Winemakers may be the celebrities of the wine world
— even here on Long Island — but the good ones know how important a top
vineyard manager is. It’s a symbiotic relationship unlike any other.

Goerler has been growing grapes for much of his
life. His father, Ron Goerler Sr., planted Jamepsort’s first vines in
1981, making him only the fourth person to plant vines on Long Island.
Almost from the beginning, the Goerler family earned a reputation for
growing some of the best fruit around — and deservedly so.

Howard, who joined Jamesport Vineyards in 2005 after
stints at Pindar Vineyards, Wolffer Estate and Bedell Cellars, is
taking that quality fruit and turning it into quality wines.

Howard’s sauvignon blanc (look for the 2007 release
this spring) is a terrific example of the grape’s local potential and
his deft, judicious use of oak in his chardonnay program leads to wines
that express their vineyard’s terroir well. The fruit’s quality is
always front and center here, not buried under piles of oak.

Jamesport Vineyards 2006 Rose ($16), a blend of
cabernet franc, merlot and syrah, is a soft, fruity rosé made in an
off-dry style. Strawberries and briar dominate the nose, after vigorous swirling helps some
sulphur aromas blow off. Juicy and somewhat round in the mouth, the fruity flavors —
strawberry and watermelon — are straightforward. There is some
sweetness here, but it’s balanced by gentle acidity. A bit more acidity
would really bring this wine alive, however. Rating:

Most of New York’s best rieslings are made in the
Finger Lakes region, not on Long Island. Still, Jamesport Vineyards’
2006 Riesling ($22) is a fine example of what the grape can become here. Also made
in an off-dry style, the nose is fruity with melon, lime-citrus and
light floral aromas. Well balanced, the palate features loads of
just-cut melon with apple and citrus zest. The most interesting of the
flavors is a distinct white pepper spice note towards the end of a lengthy finish. This isn’t a racy
riesling in the German style, but it’s fresh enough with nice acidity to play
against he subtle residual sugar. That white pepper makes this is the perfect wine to drink
with spicy Thai takeout. Rating:

As I’ve said before, local pinot noir can be
spotty, but Jamesport Vineyards’ 2005 Sarah’s Hill Pinot Noir ($45)
shows potential, though it’s a bit quiet in it’s youth. It is extremely
dark for a pinot — hopefully because of the hot, dry growing year and
not the "California Treatment" (adding syrah to boost color and heft).
With only a short time in the glass, the nose unfurls and shows off a
pretty, complex nose with aromas of ripe cherries, cola,
mixed spice, vanilla and subtle earth. The palate is velvety with red
fruit — cherries, cranberries and plum — the main flavor components
with just a little vanilla and spice. The tannins are low and well
integrated. The nose was much more interesting and layered than the
palate right out of the bottle, but two days open helped the palate expand. This is a young wine that should age well and evolve
over time. Rating:

Red blended wines aren’t hard to find on Long Island, but
ones with cabernet sauvignon as the largest percentage, like Jamesport
Vineyards’ 2004 Melange de Trois ($35) can be. Made with 41% cabernet
sauvignon, 31% merlot and 28% cabernet franc, this is an excellent Old
World-style wine from a somewhat cooler year. Rich, intense
blackberry aromas are layered with tobacco, vanilla, cocoa powder,
earth and spice on the nose. On the lighter side of medium bodied, the
flavors closely match the nose with ripe, well-integrated tannins that
provide nice structure. There are a lot of lighter-body, food friendly
local reds from 2004; this is a very good one. Rating: